Back in yester-summer of 2017 Rich and myself rode to Glentress and back when I was testing the feasability of off road fixed on the Steamroller in preparation for Grinduro. Since then I have been super keen to repeat this ride on a more robust bike so that increased rowdiness could be factored in. As Stu was yet to ride his Highland Trail 550 bike we decided to get out and put his sparkly single speed through its paces. 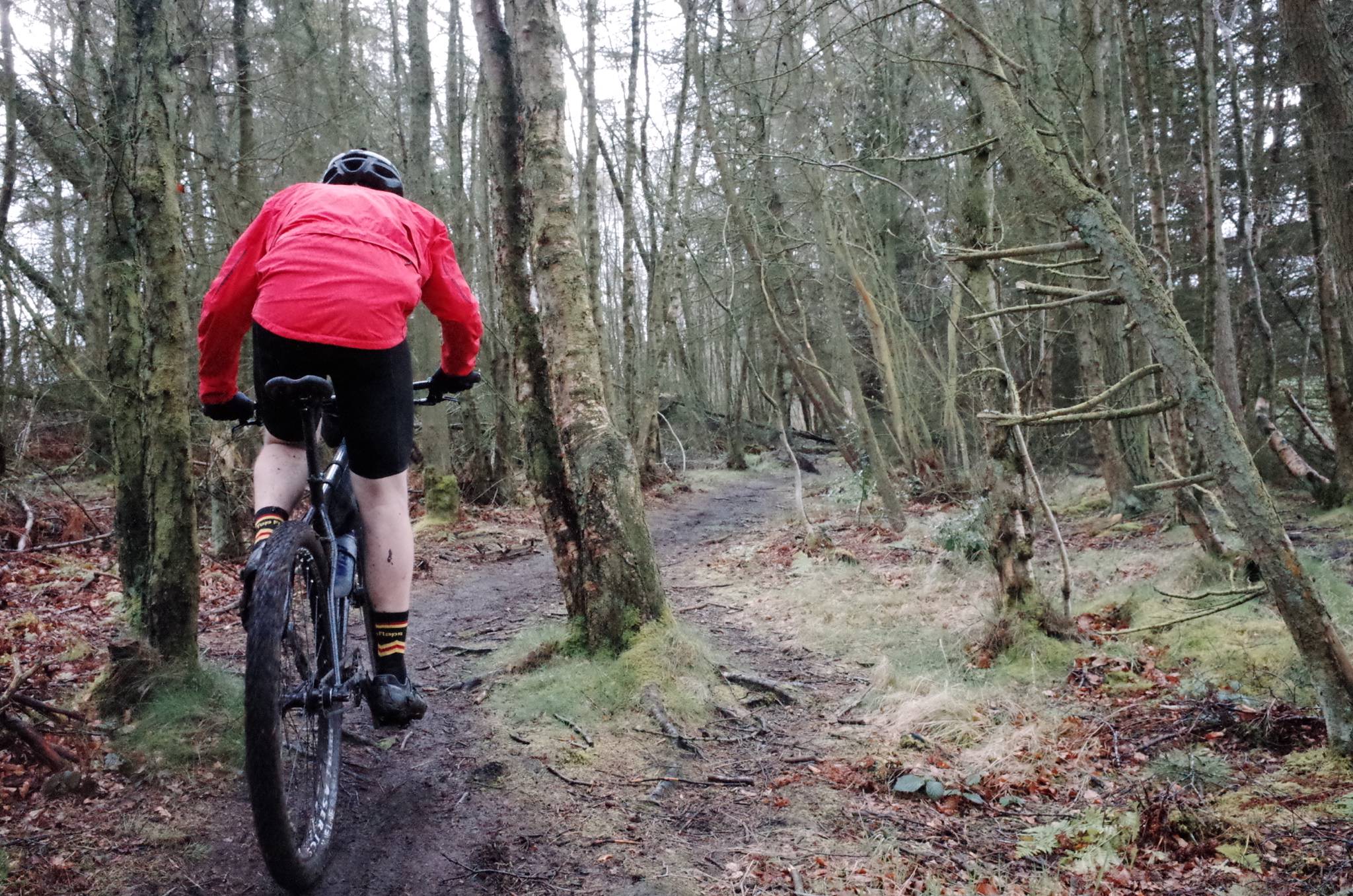 After hiding in my flat from the rain for a bit we made a move and joined the Waters of Leith which whisked us out of the depths of Edinburgh to Balerno. We cut through to the woods on the other side of the village and followed a singletrack towards the Pentlands that I have wanted to explore for a while. Although boggy in spots, it had enough twists and roots to make for an interesting climb. We left the trees and picked up the Red Road track followed by Monks Cap which would take us to the top of Cap Law. 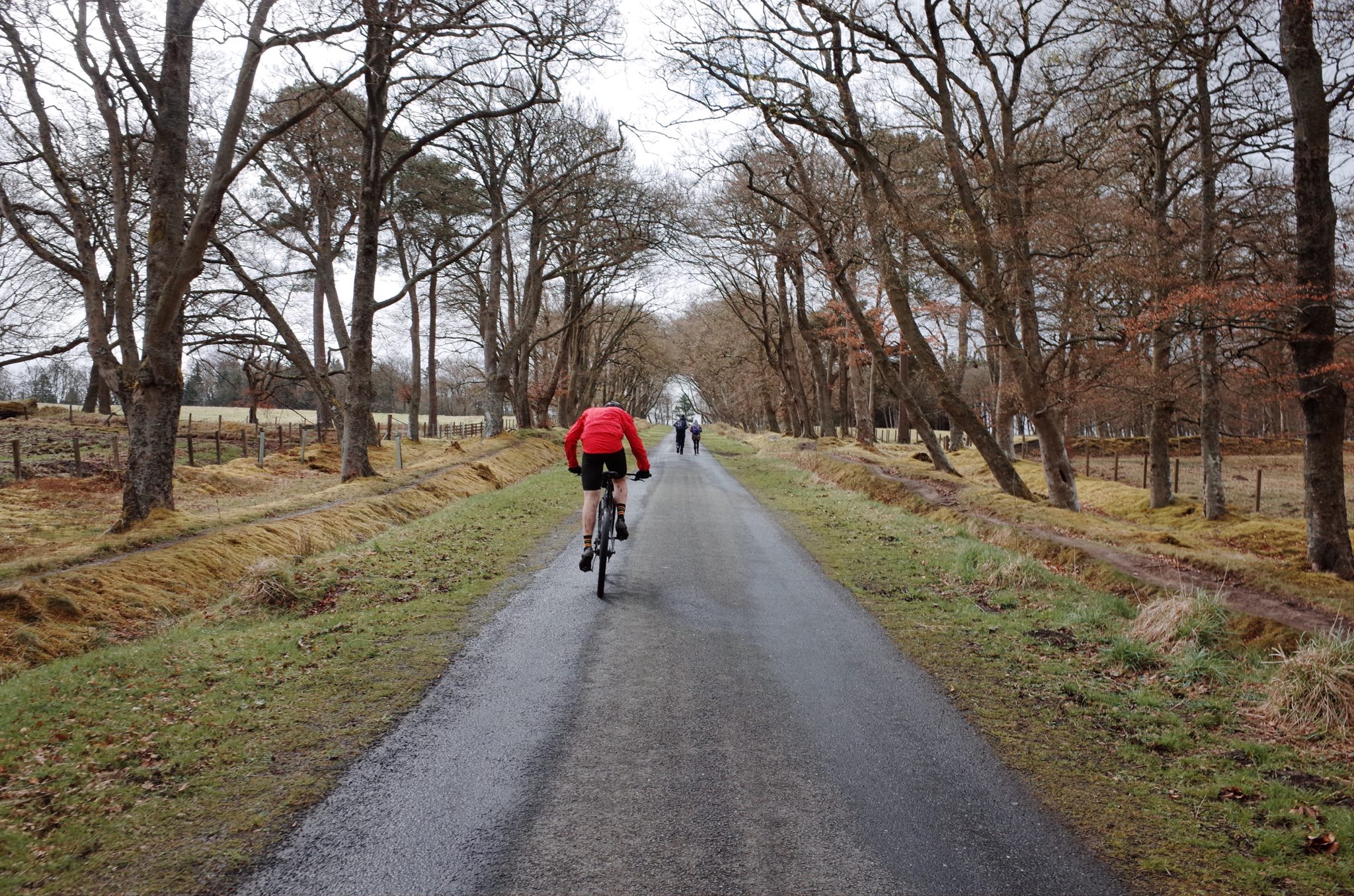 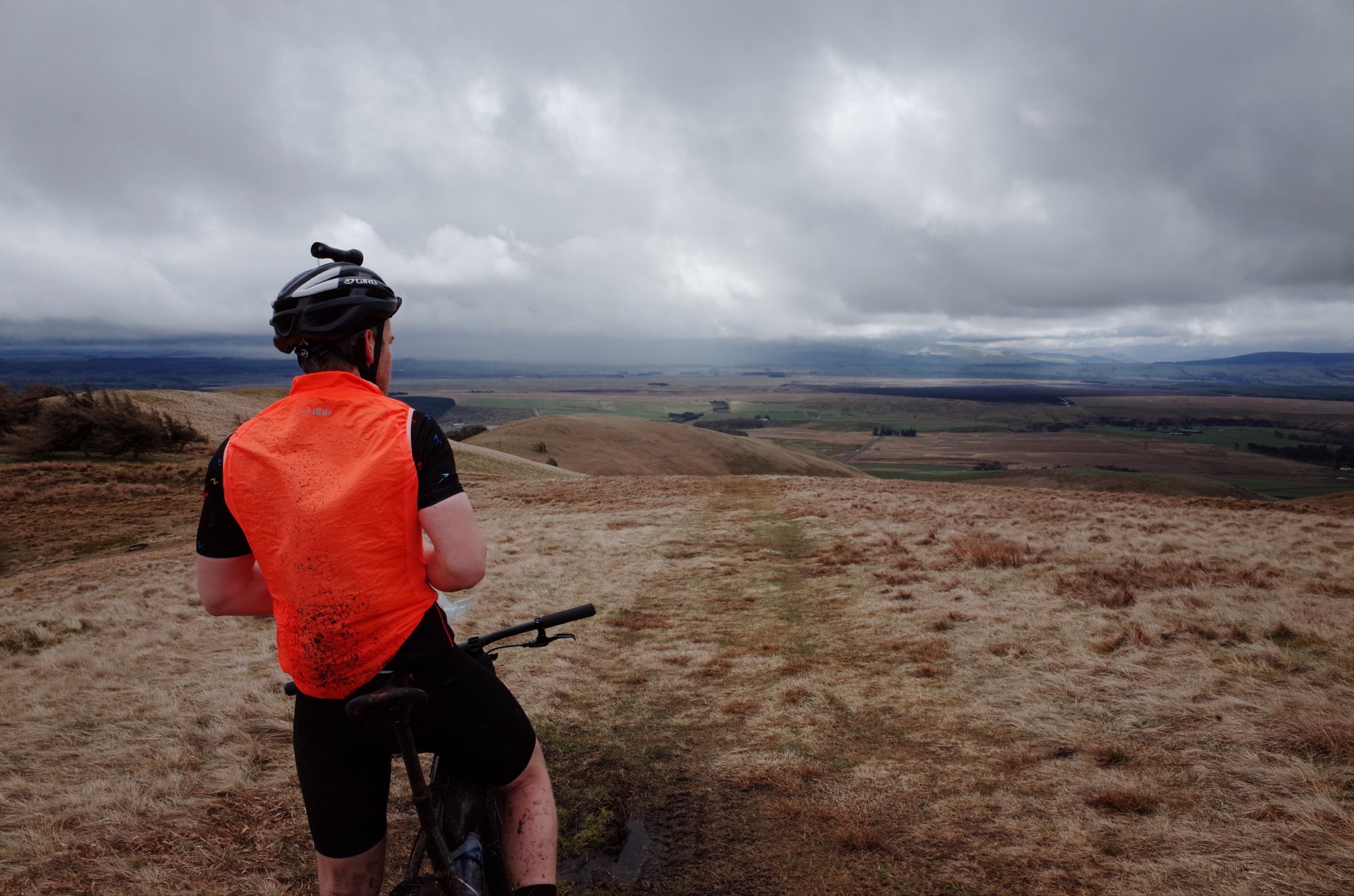 Cap Law gave us an excellent grassy descent with long open straights and ruts that formed naturally bermed corners. We crossed the valley floor between Carlops and our next gravel section past White Rig. The weather wanted to show us that it was still spring and the dark clouds rolled in. 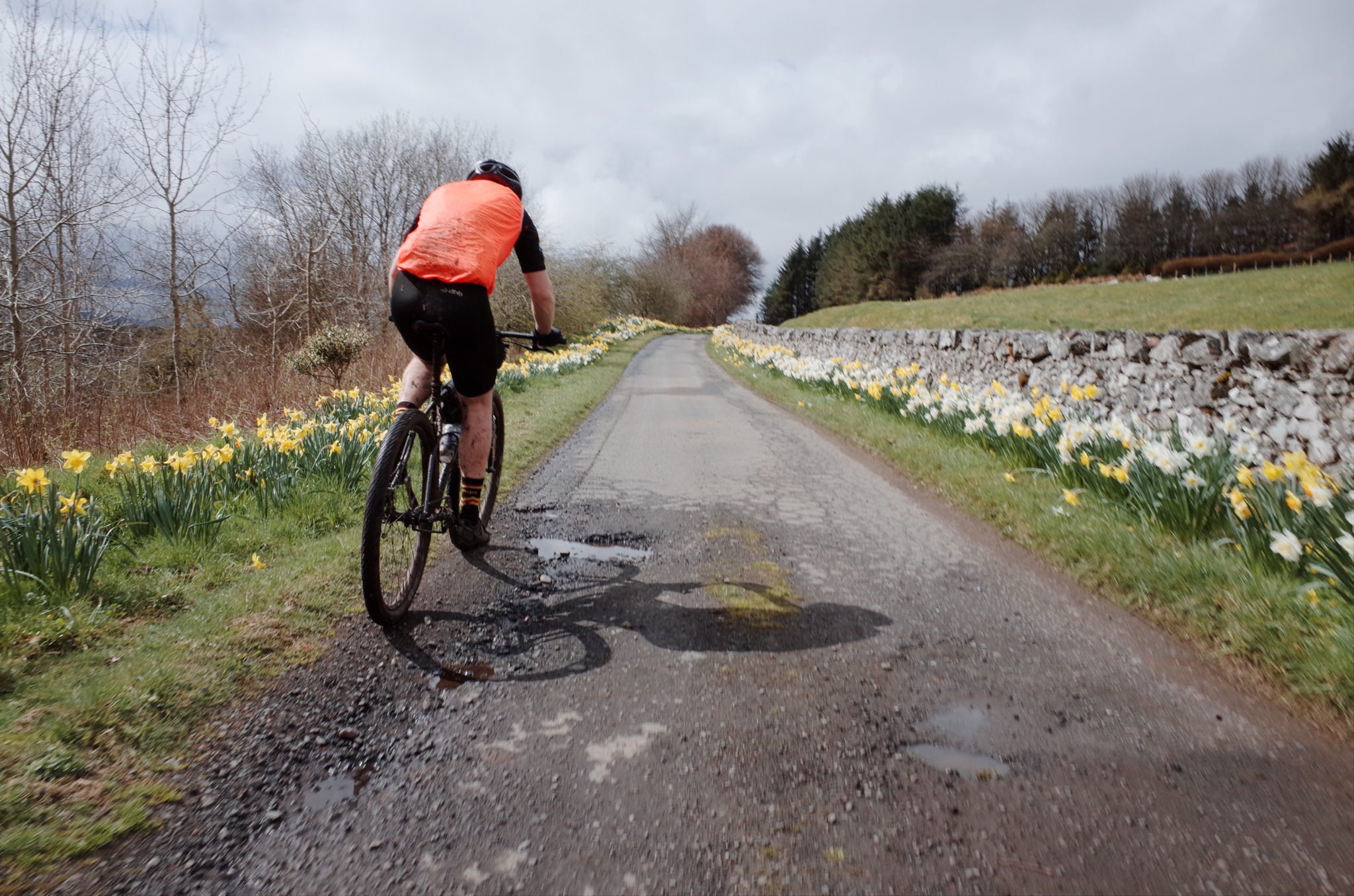 On and off heavy showers would have been been manageable however the sloppy cow muck to rain ratio was not in our favour and we were forced to creep along field tracks in an effort to reduce unpleasant spraying. 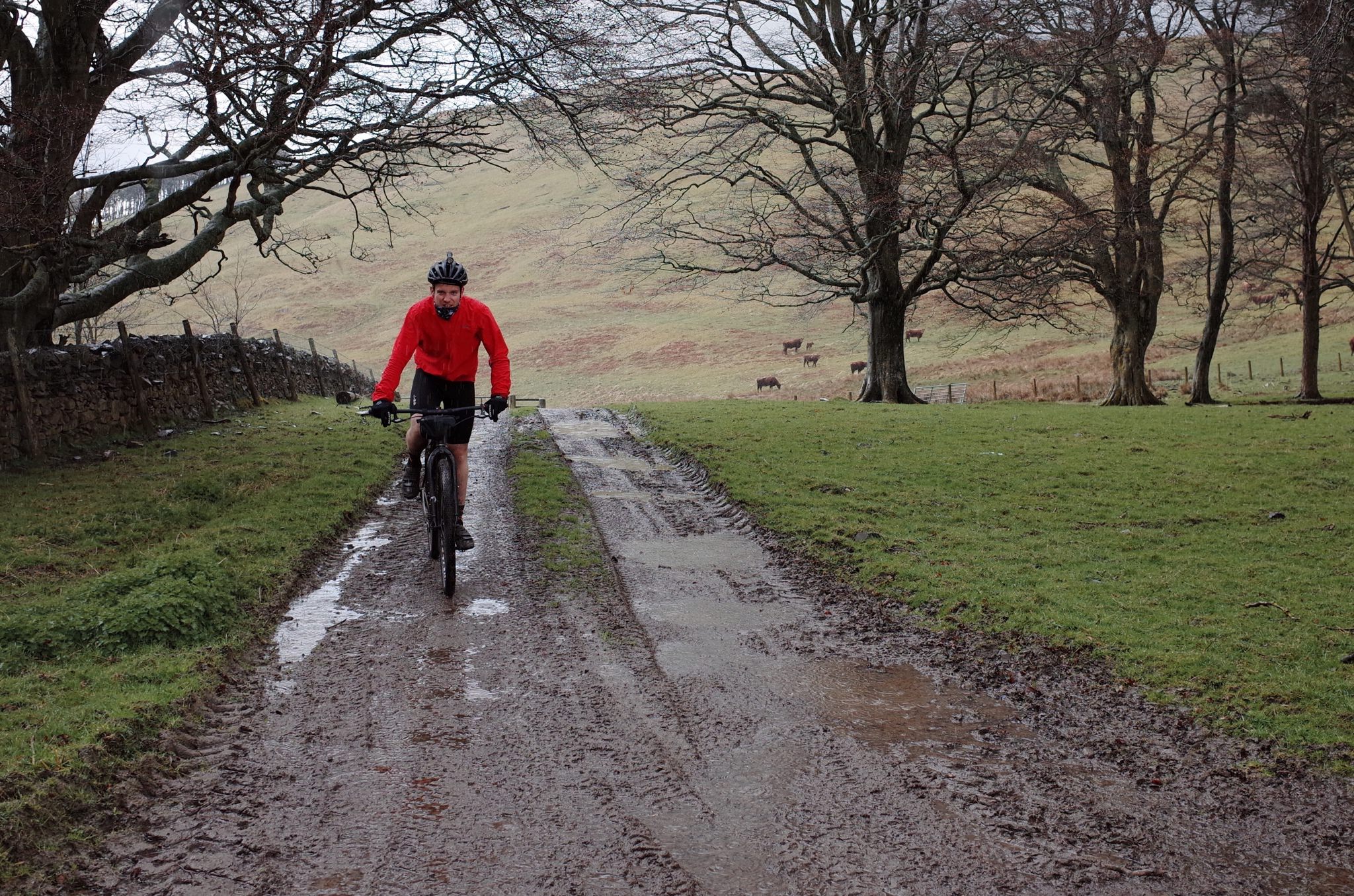 After a very careful cafe stop – involving sitting on jackets and touching as little as possible so not to smear “mud” everywhere – we were back out , determined that we would make Glentress. More farm track, more rain and much more climbing with some added hail stones for good measure made this open section tough going. Riding was replaced with pushing as we left the flatter farm land behind and headed into the real hills. 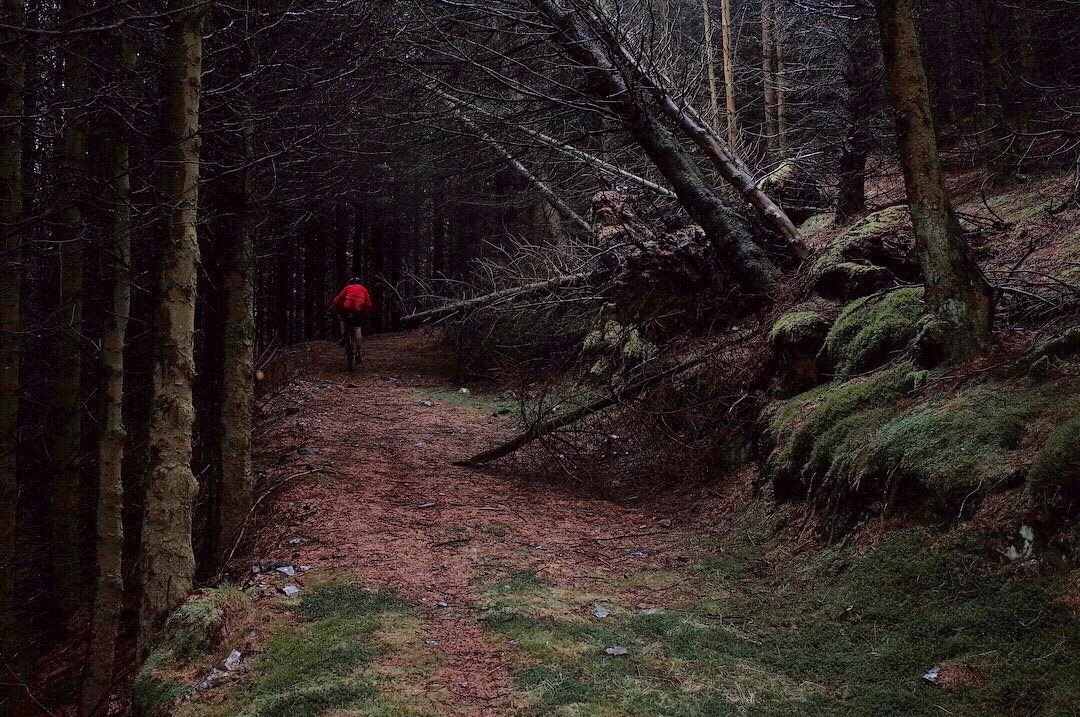 Soon we reached the tree line, shelter from the weather and more importantly a sign that we were getting close. Over a fence and the small track was swallowed by the forest forming a dark corridor. Although no sign of regular use, this path, lying out back and forgotten about, was ominously clear. 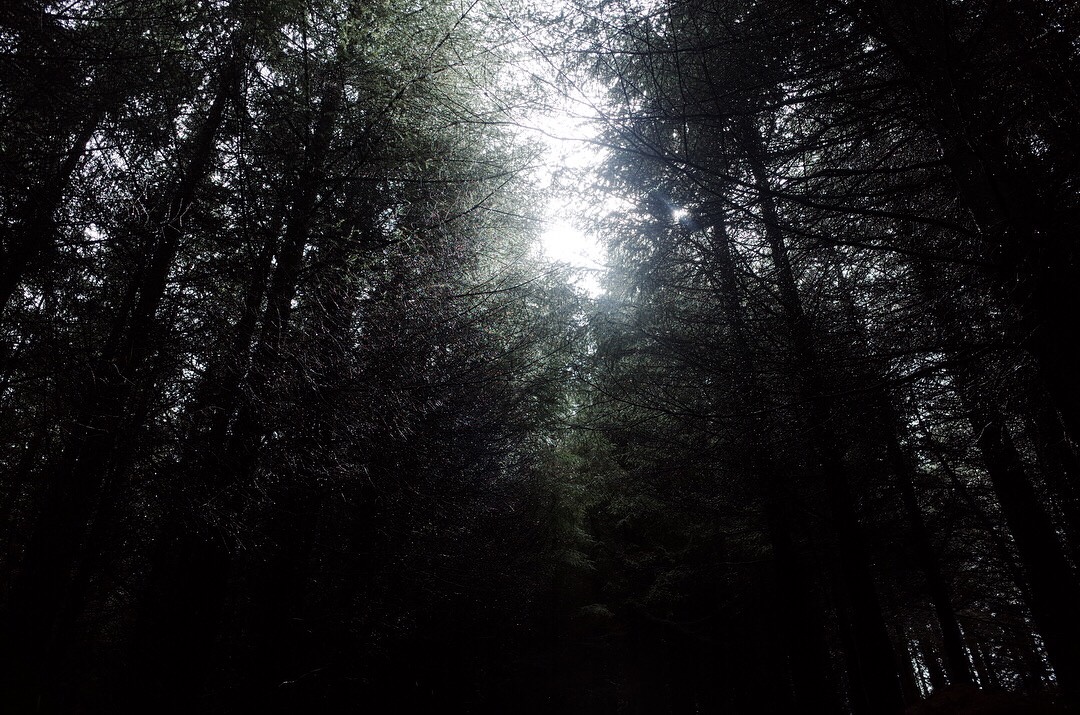 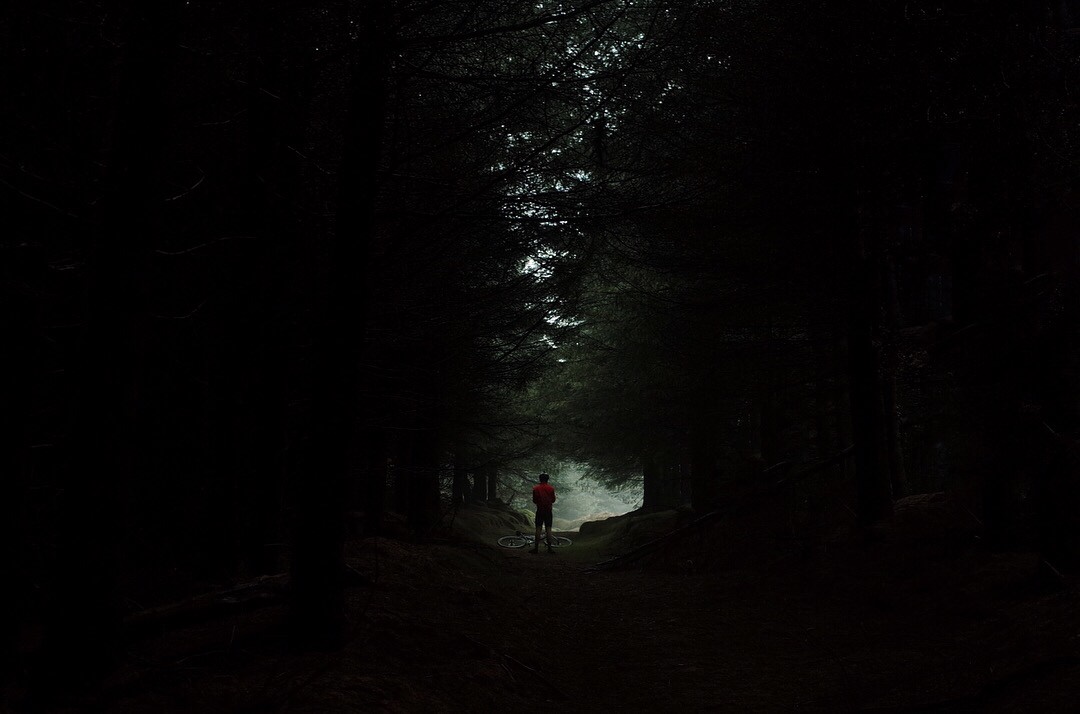 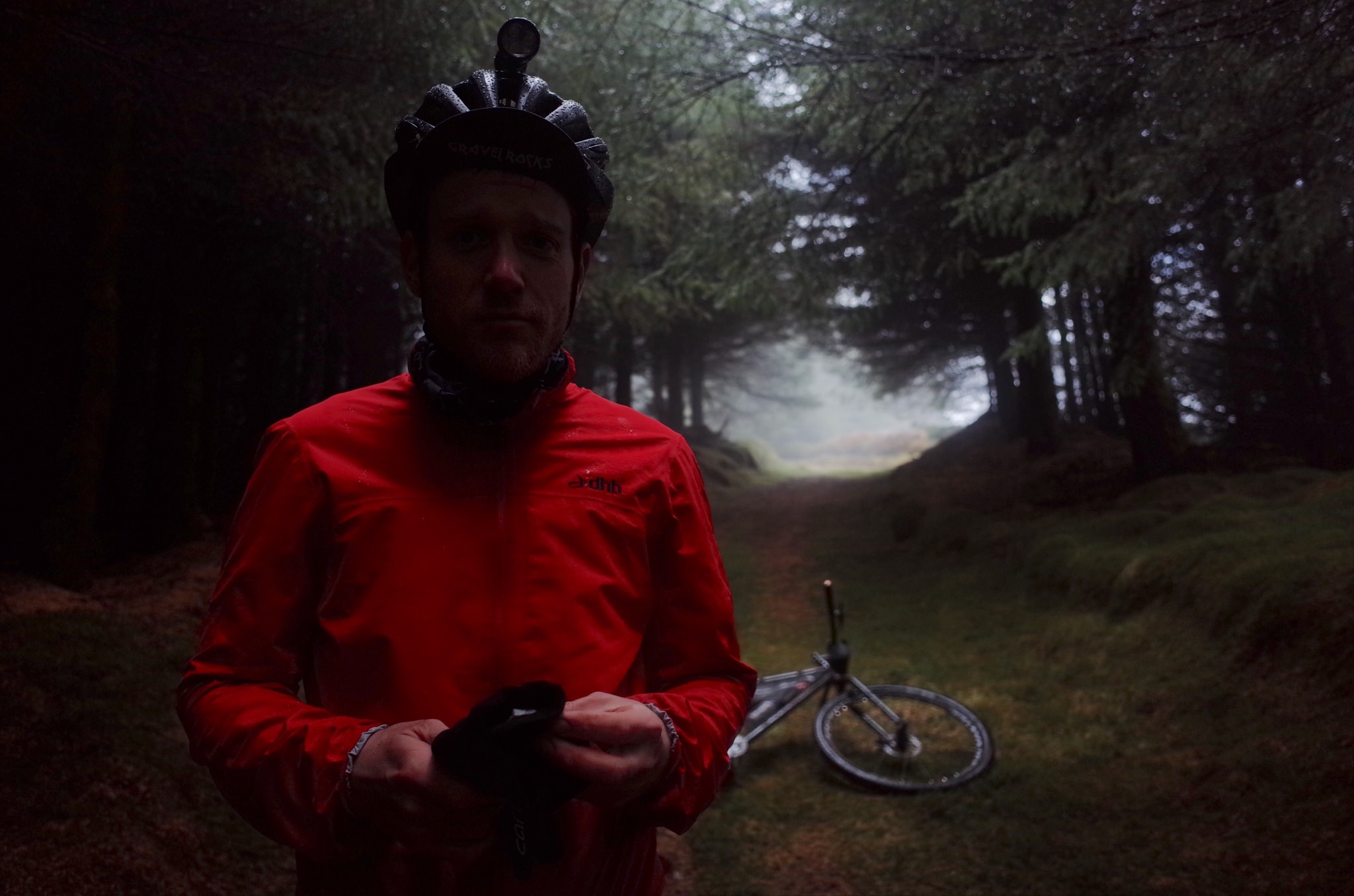 Small track turned to overgrown forest road. Signs of human traffic started to appear as we climbed towards the mast on Dunslair Heights where we would pick up the trails and enjoy the rewards of our climbing labours. 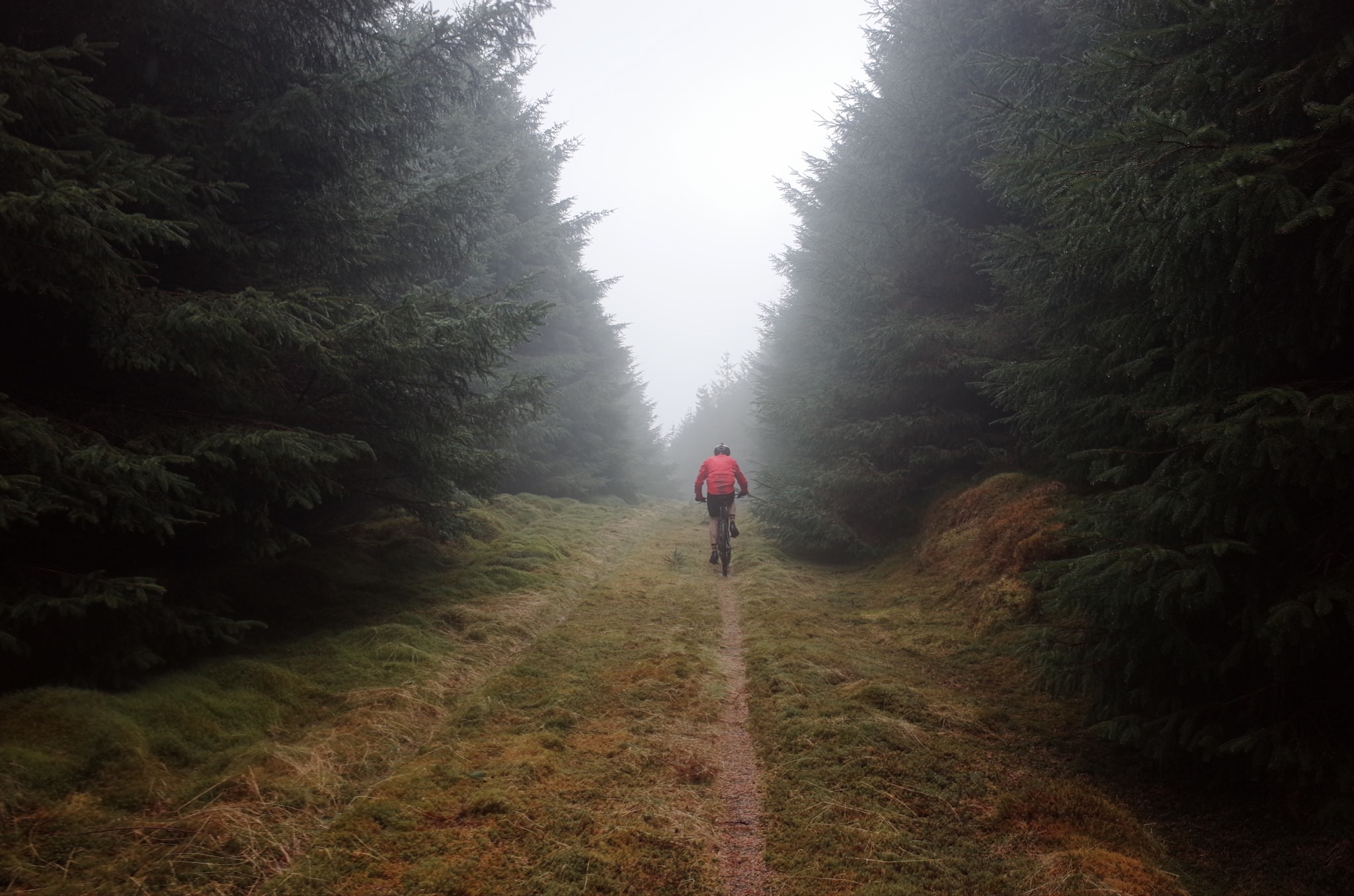 Even though there had been a good period of sun over the last few weeks, large patches of snow were still holding strong. Greyed and dirty they made sure that all nearby tracks remained suitable moist. 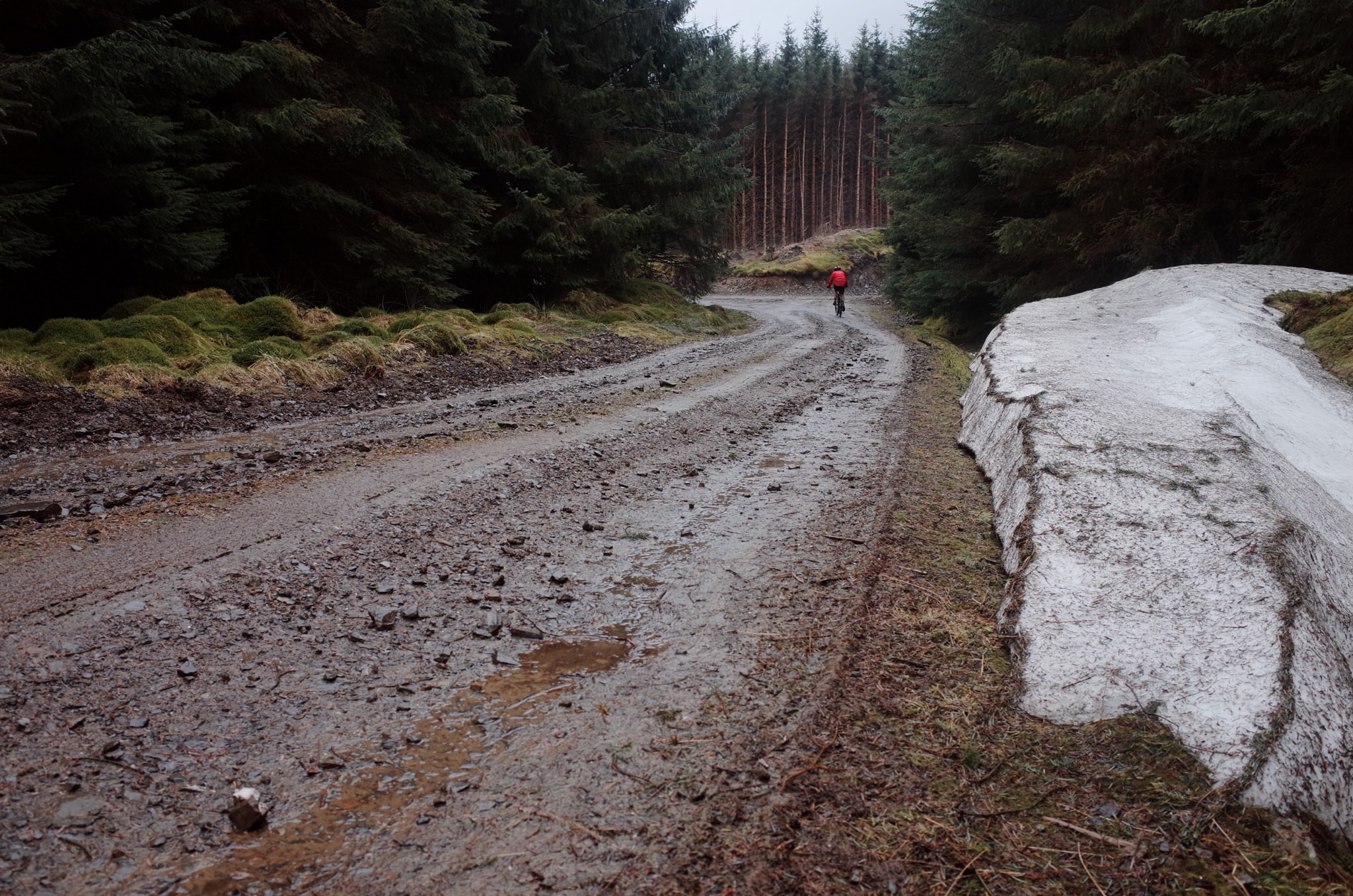 I always hope to stumble across some hidden trail gold when I pass through this area. A secretive turn off into treasure that can only be sculpted with dedication and kept nice through an invite to ride only basis. There is probably nothing there but it doesn’t stop me being optimistic around each corner. 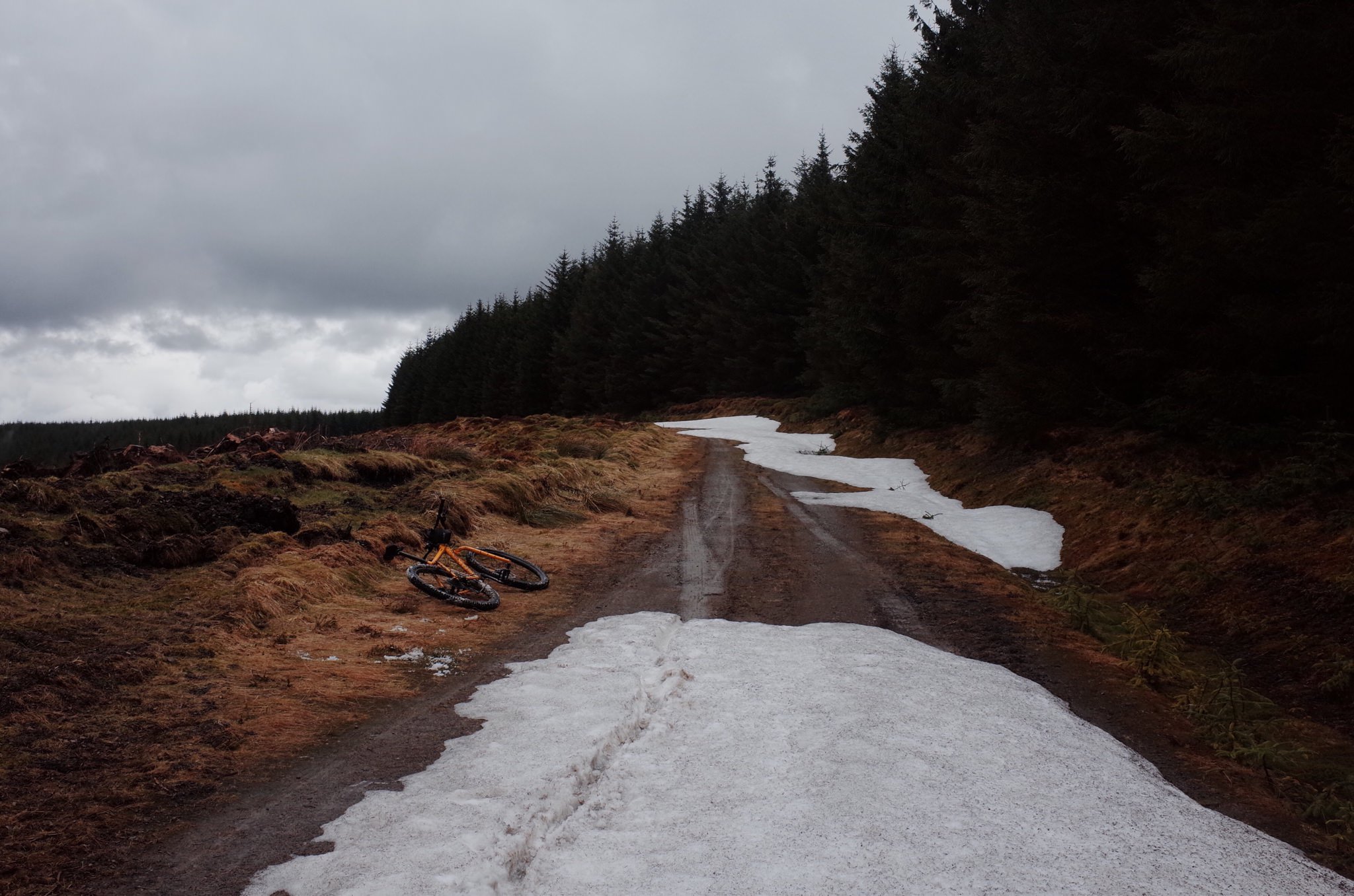 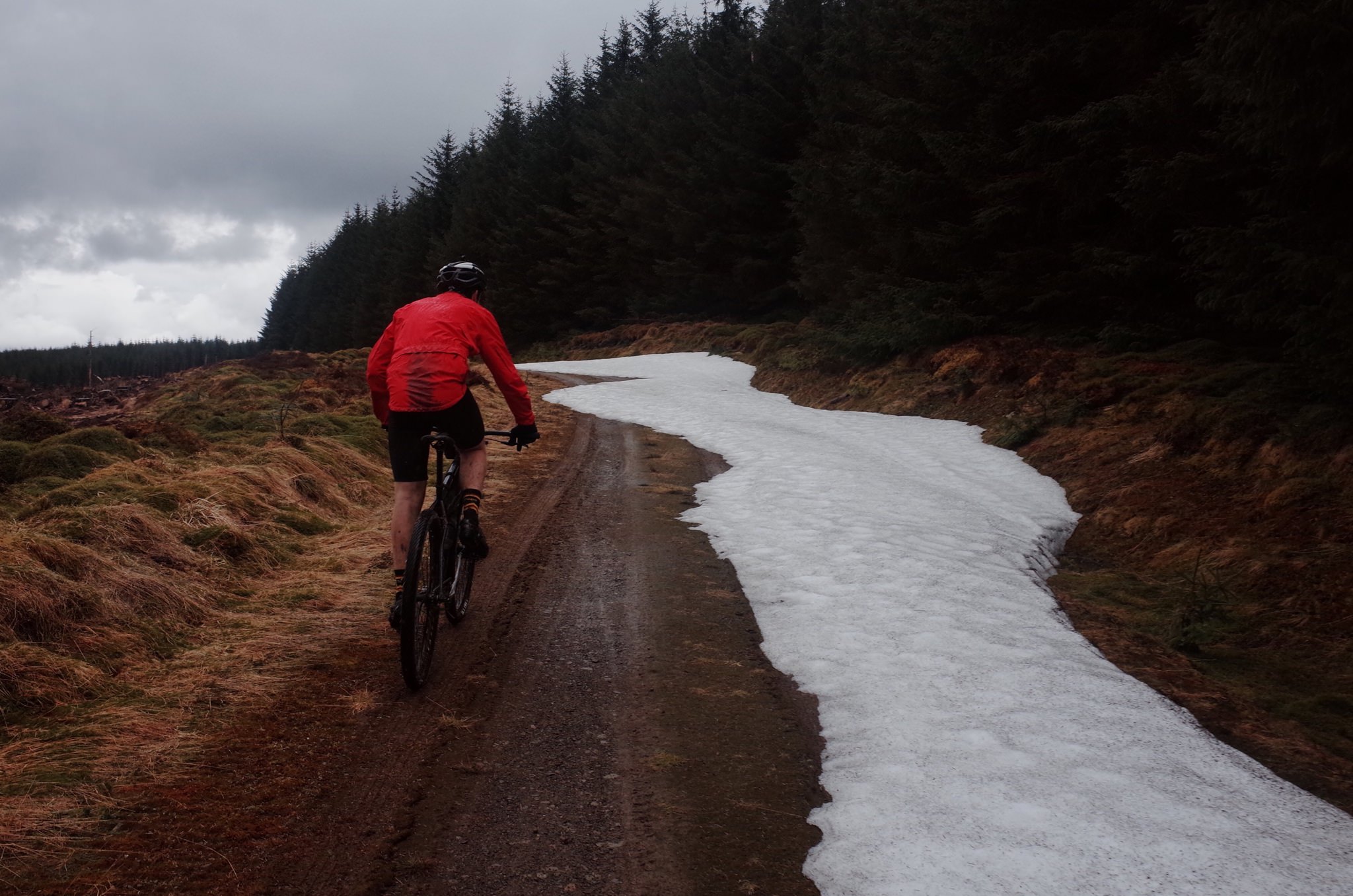 And then my camera ran out of battery but we had also made the mast and once there I only had one thing on my mind. We dropped below the snow line again and I was able to get off the brakes and let the bike run free. The Karate Monkey demonstrated little interest for going slowly. The 29er wheels tried their best to glide over the top of deeply embedded braking bumps and so long as I could physically hold on I could carry all the speed available through the corners. In fact I was only 15 seconds off my PR on Spookywood which if the Monkey had a little upfront cush to sure up the front end could be touchable .

We followed the well worn red route of Super G, Hit Squad Hill, Pie Run and Magic Mushroom, all much of the same mix of risk management graded trails and braking bumps*. Then on a small connecting trail my gears decided to stop working** and rather than take the shifter apart trail side and have many tiny springs ping to other dimensions, we fiddled it into an almost usable gear. Promptly and despite some poor local directions we exited with a hurried spin along the road to catch the train. I was disappointed not to make it back to Edinburgh but the ride had served its purpose. We both had a few things to fettle to make our bikes ready for shredding the next prep step and onwards to the ultimate goal of the HT550.

* But that is a subject for another day.

** The SRAM NX routing and cable management is not ideal. The cable can get loose, pokes into the shifter and things get all messed up.