Although the weather reports had been full of pleasant predictions of sunshine it had warned that the weather for day 3 would be a bit Scottish. Sure enough what had previously been dry and dusty was now soggy and gritty. We busied ourselves making breakfast and fixing punctures. Working towards, but trying to avoid, inevitably going outside. A last look around the bothy, a quick chat with the German’s in the room next door and we were out of excuses. 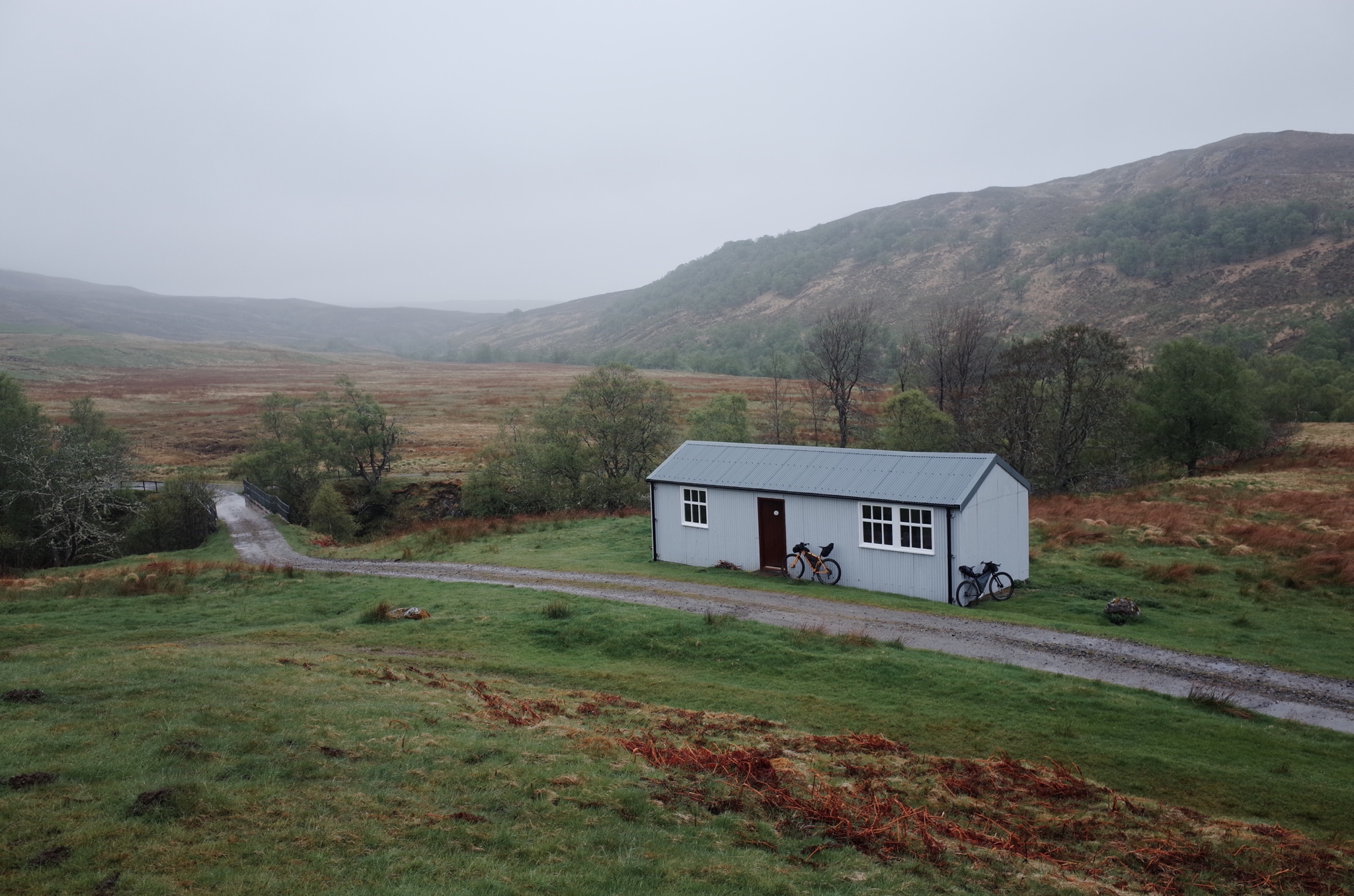 Cap peaks were flicked down as the rain got to work soaking us. We passed our friend from the first day riding in the opposite direction. He had decided that the weather was too cold and wet and was returning to his campsite to wait for the clouds to break. We were confident in the weather report that had promised an afternoon of better weather  and continued on to tackle the notorious northern loop.

There are many difficult areas on the Highland Trail but when you read up on the route the Northern Loop is always spoken about with a strong level of respect. This is one of the most remote areas of the trail and there are very few bail out options. You are either going forwards or backwards.

Just 3 miles after seeing our friend we were beginning to feel the cold, maybe he was right. We were determined. Stopping for a quick shelter at a fishing hut, Stu disappeared round the back and after a little rummaging and tailoring we were both now outfitted with new super water and wind proof animal feed gilets. 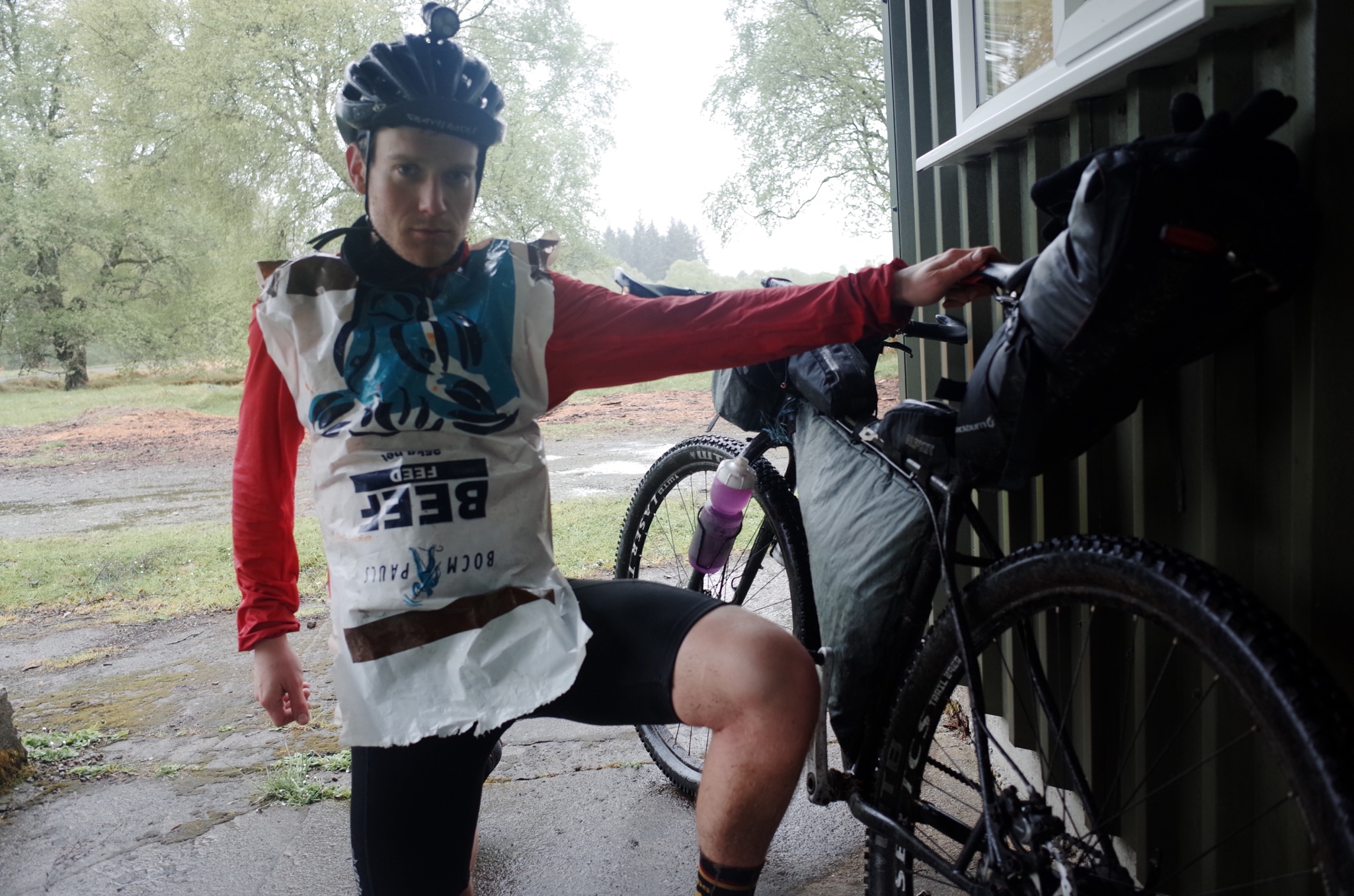 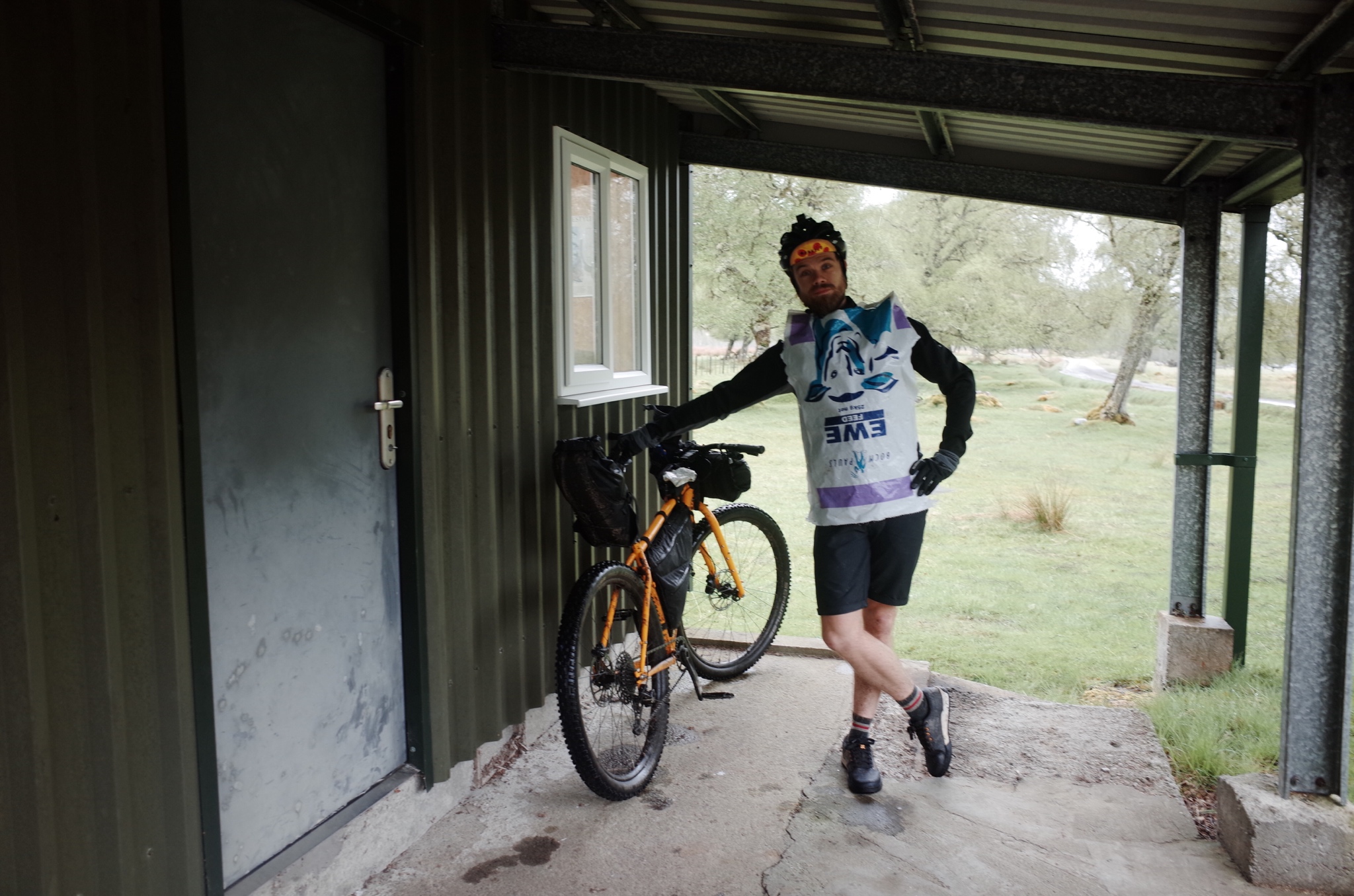 My muscles were not warming up and I toiled along the road. I was already feeling glad for my new wet weather gear. Riding through a farm at the top of the road we were passed by a big group of bikepackers/tourers, all different bikes and setups but all had the same grimace. It was not promising that we would fair any better. The road from the power station was a harsh pull and my legs were still struggling. 25 minutes churning my lowest gear as the rain dripped off and out of everything. 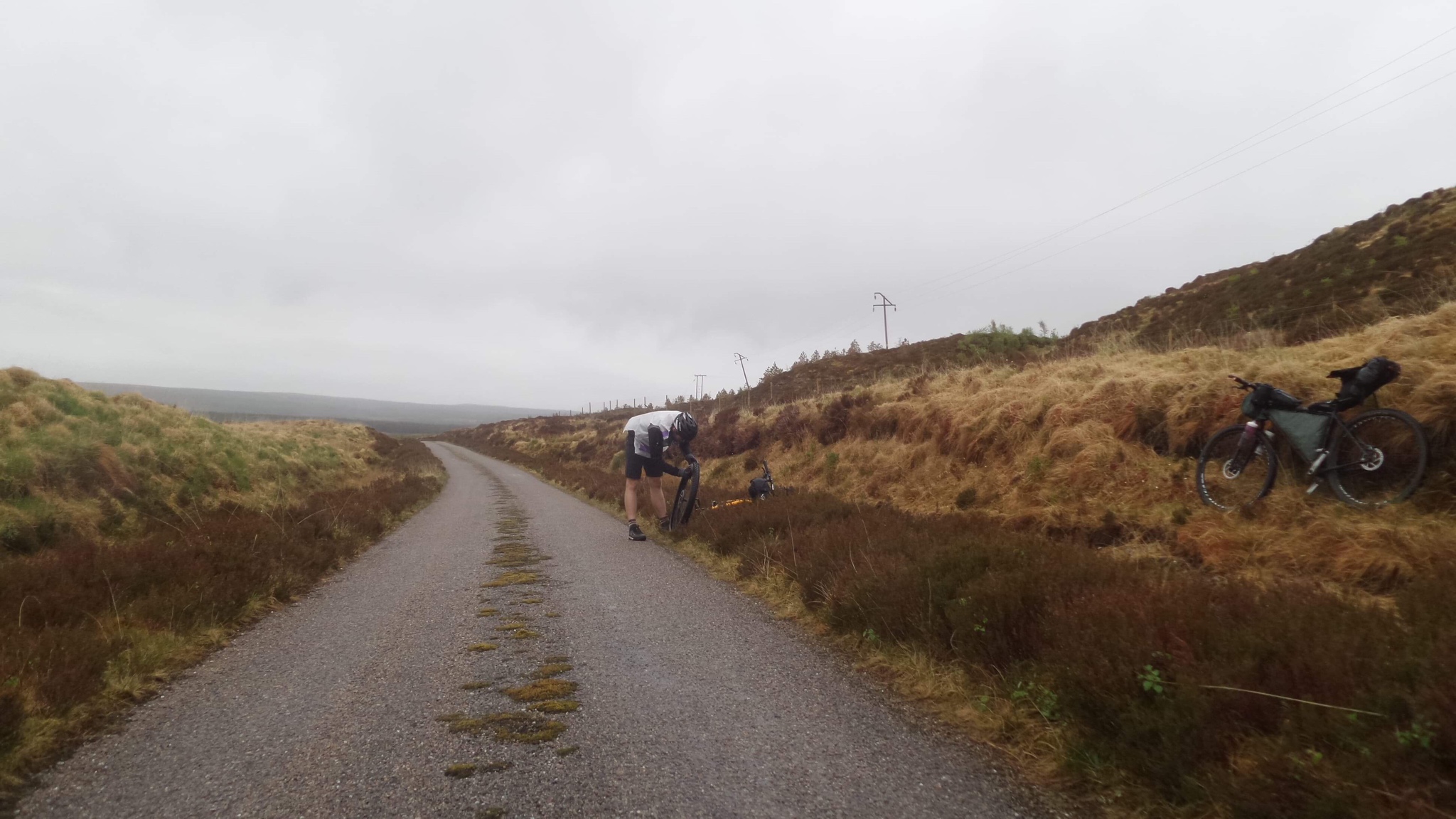 The next descent I pondered why Stu was able to coast away and leave me for dead, as I continued it became obvious. Yet another puncture and an explanation or excuse as to why my legs seemed so frazzled. I nursed my very squidgy tyre down the road in the hope that the weather would be milder as the elevation decreased. This was optimistic thinking and I could get to work as quickly as possible while Stu danced around in an attempt to retain any warmth. No time for glue, new tube this time.

Two men loading a digger on to a lorry spoke to us, “Nice jackets boys, where’d you get those?” They had seen us by the fishing hut and both men seemed equal part amused and bemused at our plans for the day. They proudly confirmed that the next section of offroad was to be good going as he had resurfaced it themselves. 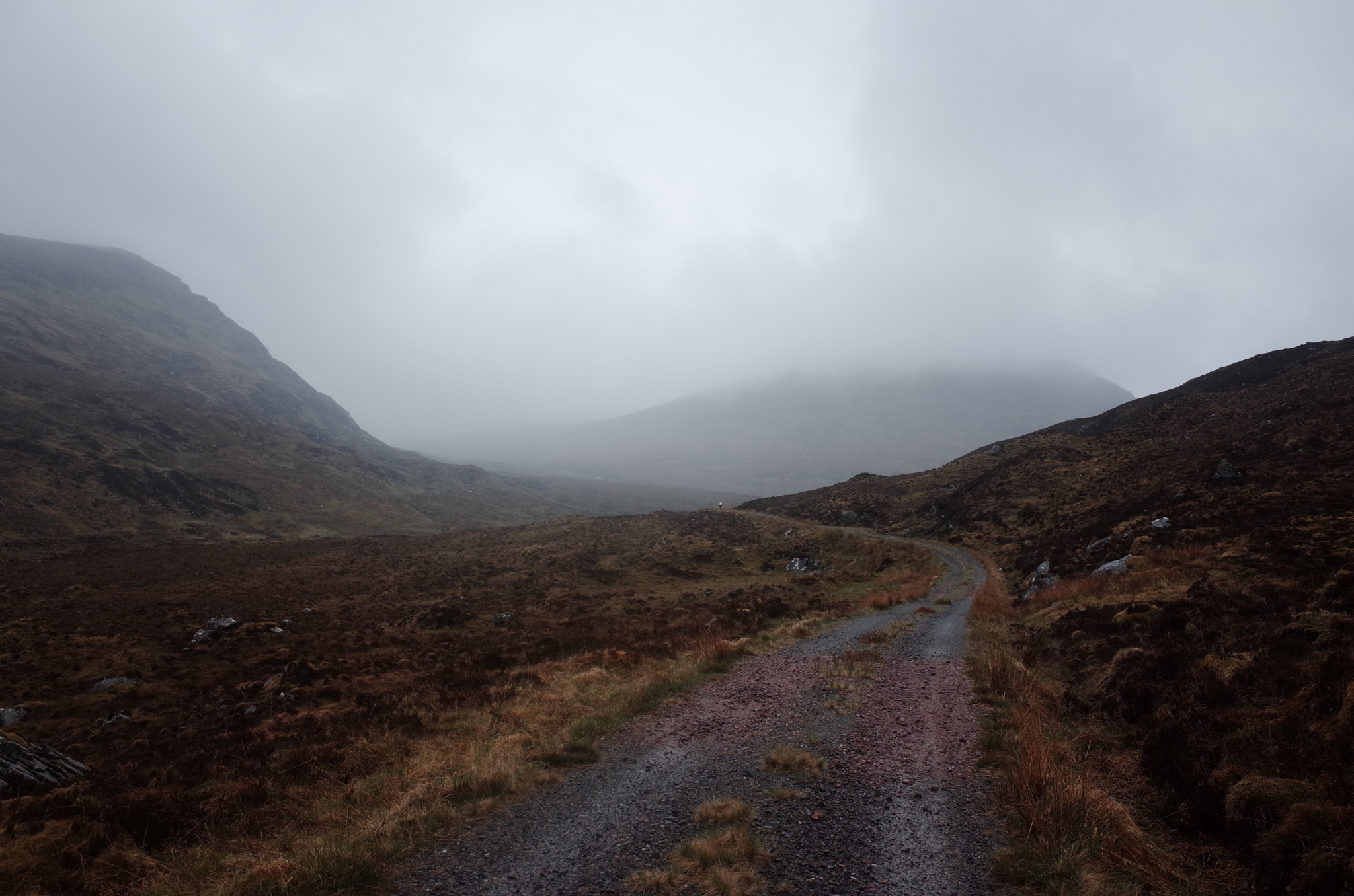 And he was right. Now midday and with my legs feeling a bit better we started feeling optimistic that soon enough the weather would clear up and today wouldn’t be as tough as expected. This was meant to be a spectacular part of Scotland yet the weather was not willing to share. 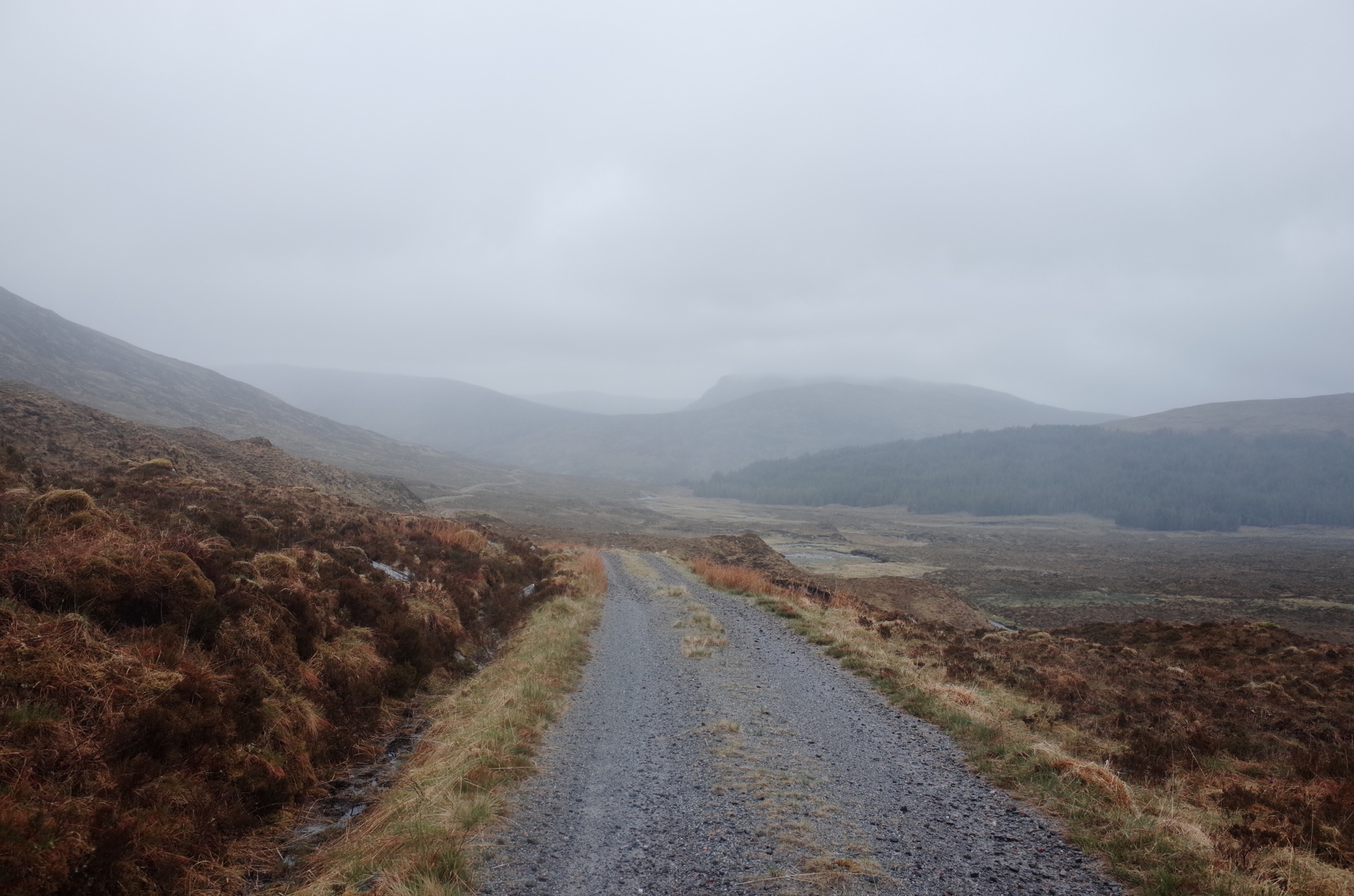 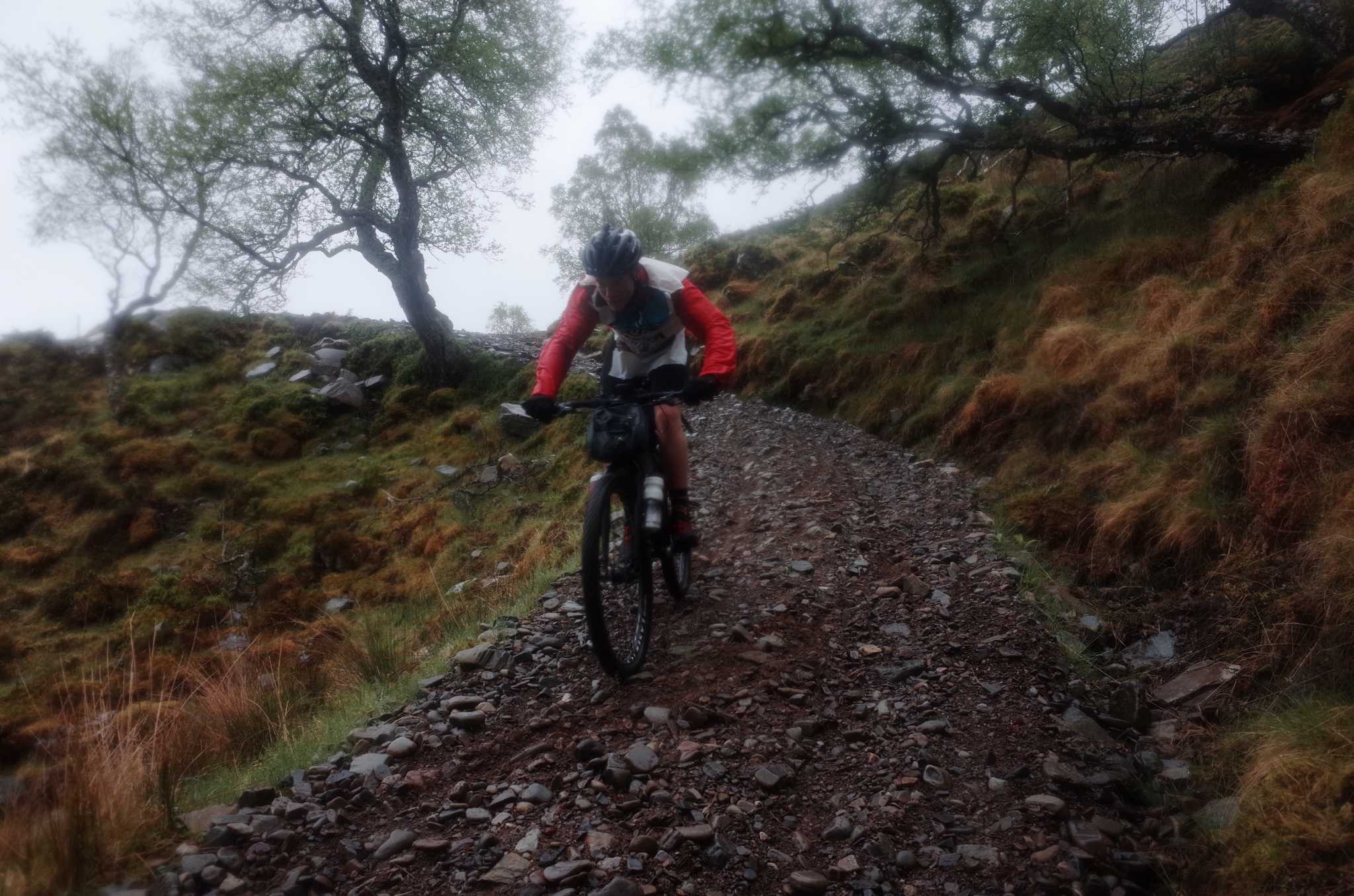 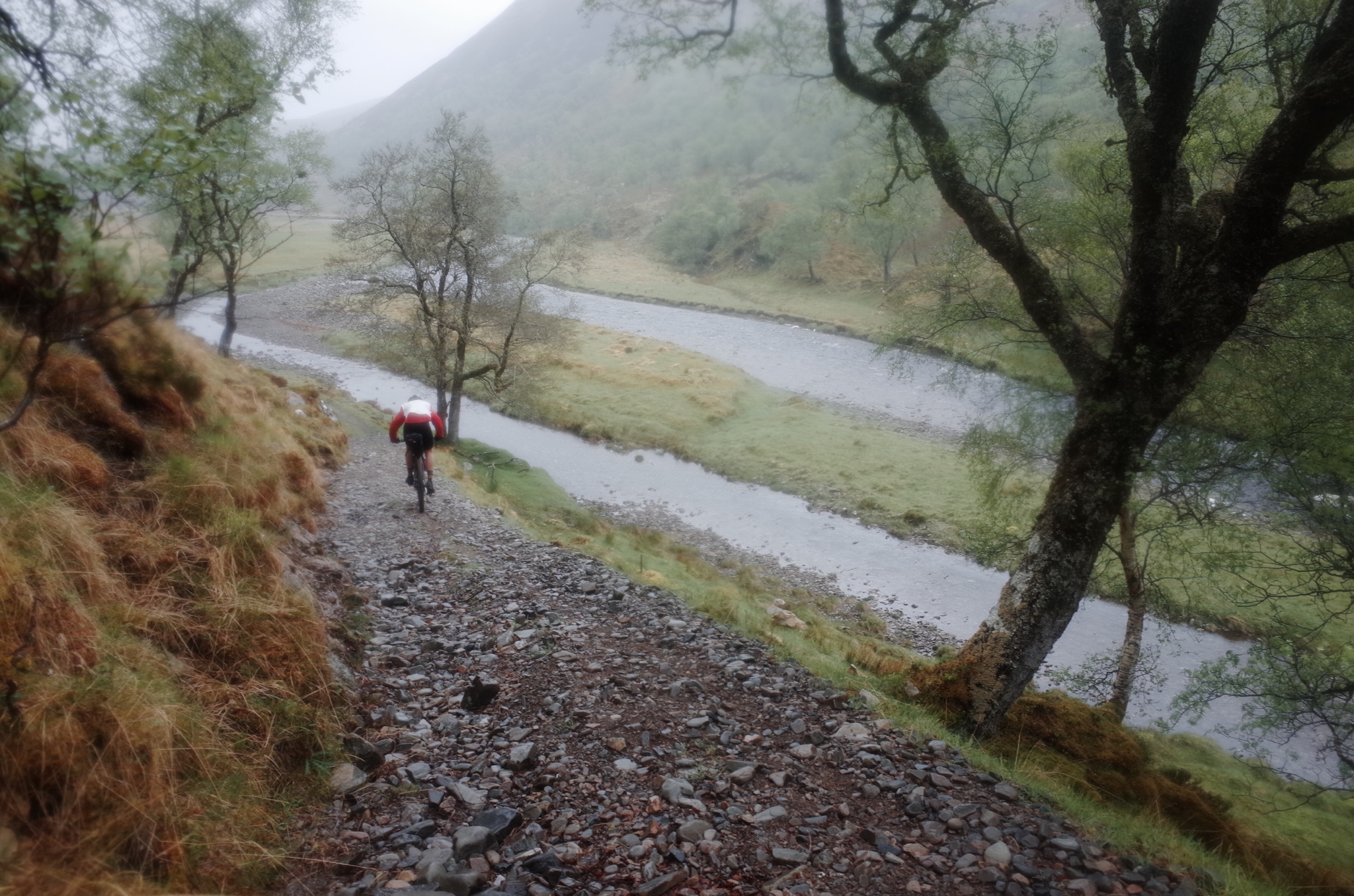 The track dropped abruptly. I had seen bit of trail that twists into a valley in a number of photos. It was comforting to see something I recognised. Not cause it was a significant point or route marker but because so far in our world of grey we had had very little in the way of visual stimulation or land marks. At least we knew now that we were still definitely on the route.

What we didn’t know was that this point was in fact a significant point on the route. For anyone that reads this in preparation for their attempt, its from around this point onwards that the Northern Loop gets its reputation.

As the path quickly pulled itself from the little valley the rain showed its intentions for the day. Gone was the flappy jersey 22ºC sweat fest of the day before, instead it was now a miserably damp 5ºC hardship. At this point I have never been more appreciative of an item of clothing as I was of my animal feed gilet. My sogginess levels reached 100% as finally my Fivetens gave up the good fight against the elements. My camera was now tucked as far away from the elements as possible.

The memory of the next few hours is hazy. The mind can do odd things and erasing memories of hardship is one of those tricks. The Bealach Horn is one memory that my brain decided I would be better off without. It was around 14:20 and due to the unrelenting unpleasantness of the weather we had not been able to stop for any longer than to stuff a Snickers in our face and pushing on. I was beginning to flag as I hadn’t eaten a significant meal since Contin, the pushing and lifting of my loaded bike through the peat hags was straining my final reserves.

The weather then showed how truly cruel it can be. As the path began to level out the clouds lifted a little. We could see the path began point downwards into a large void, then we could see a coire, then a well established looking track continuing the downward trajectory. We this was it, the beginning of the end. We started checking our GPS to try figure out where we would join this path and as the cloud lifted up the opposite wall we came to the stiff realisation that we were not destined for the luxurious landrover track but more pushing.

Optimistically we mounted our bikes but soon we were were pushing again. This time down the hill. The path had all but turned into the occasional foot print in a bog, peat hag or slick wet grass, grip was nonexistent and the last thing I wanted was to be rolling about on the cold wet ground. Reaching the bottom we were had a couple of rivers to cross, already beefed up the the days rain we had make consideration of the ideal crossing point. Stu went first and fought his way across, carefully balancing each step. I shouldered my bike and for the first time in the day made something look easy. Lowering myself down the bank into the water my Five Tens immediately gripped and I walked through the knee deep rivers as if I was on flat ground.

“Feels like we are doing it”, was frequently repeated to each other and the type 2 bike humour couldn’t have been closer to the truth. I ached and the cold chilled me through my clothes. I think I only made the last climb as I had no other option. The reality that if I didn’t push on I would just be there longer was just enough grim motivation for one foot to be put in front of another. The only positive was that it couldn’t go on forever.

Cold hands and feet made it hard to enjoy the descent alongside the Allt Horn. Now on an actual established track I slowly began feeling a less miserable as gravity took us off the mountain. Things even began getting a little competitive as Stu took the lead down a technical series of steep corners that we picked our way down with very little finesse. Off the brakes and we ripped into the woods at the bottom. Stu then got bounced off line at a choke point with a tree. The back wheel out of control he ploughed into a drainage ditch. I expected a big over the bars and a less than circular front wheel. However he held it and came to a screeching halt. 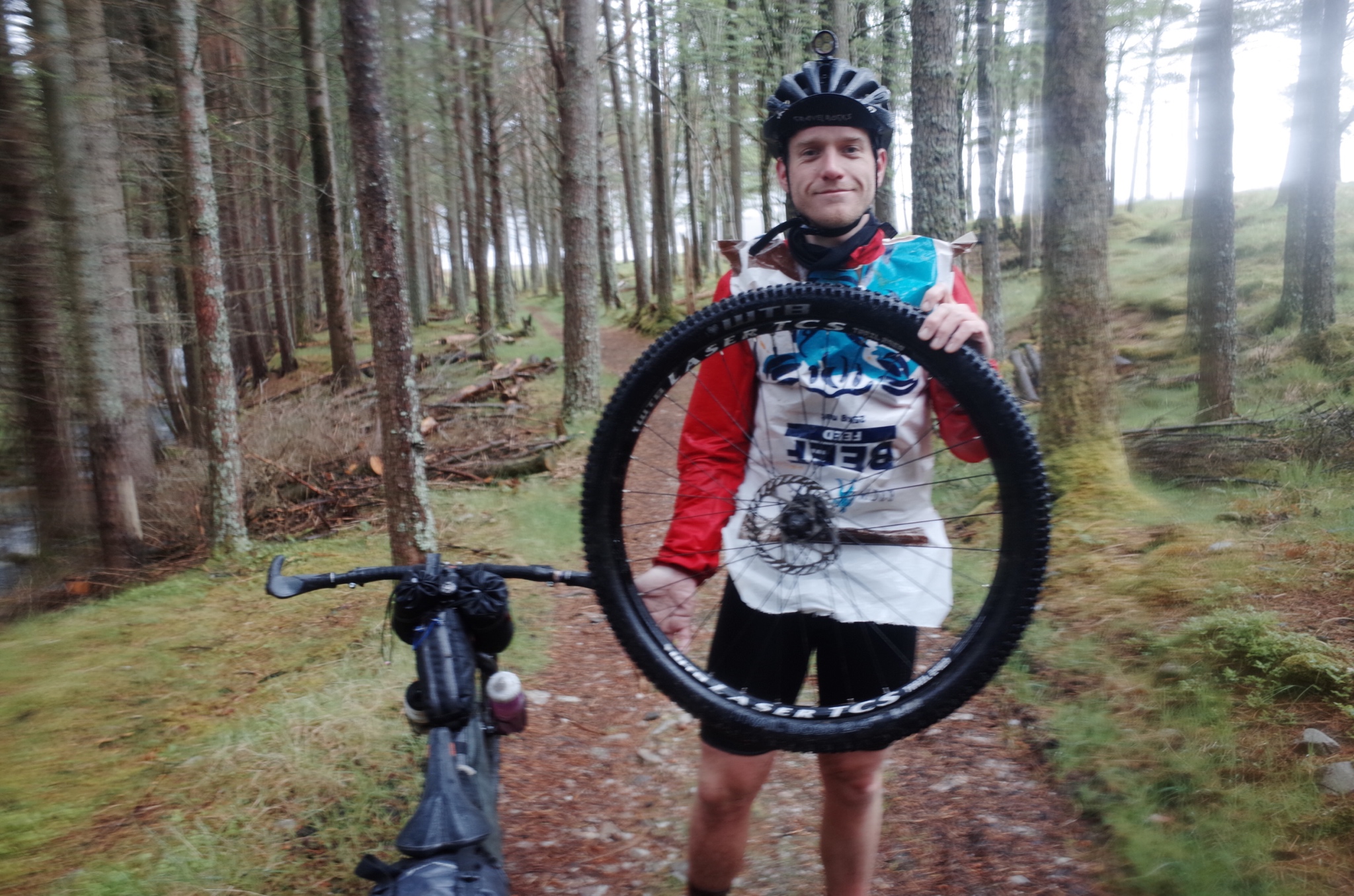 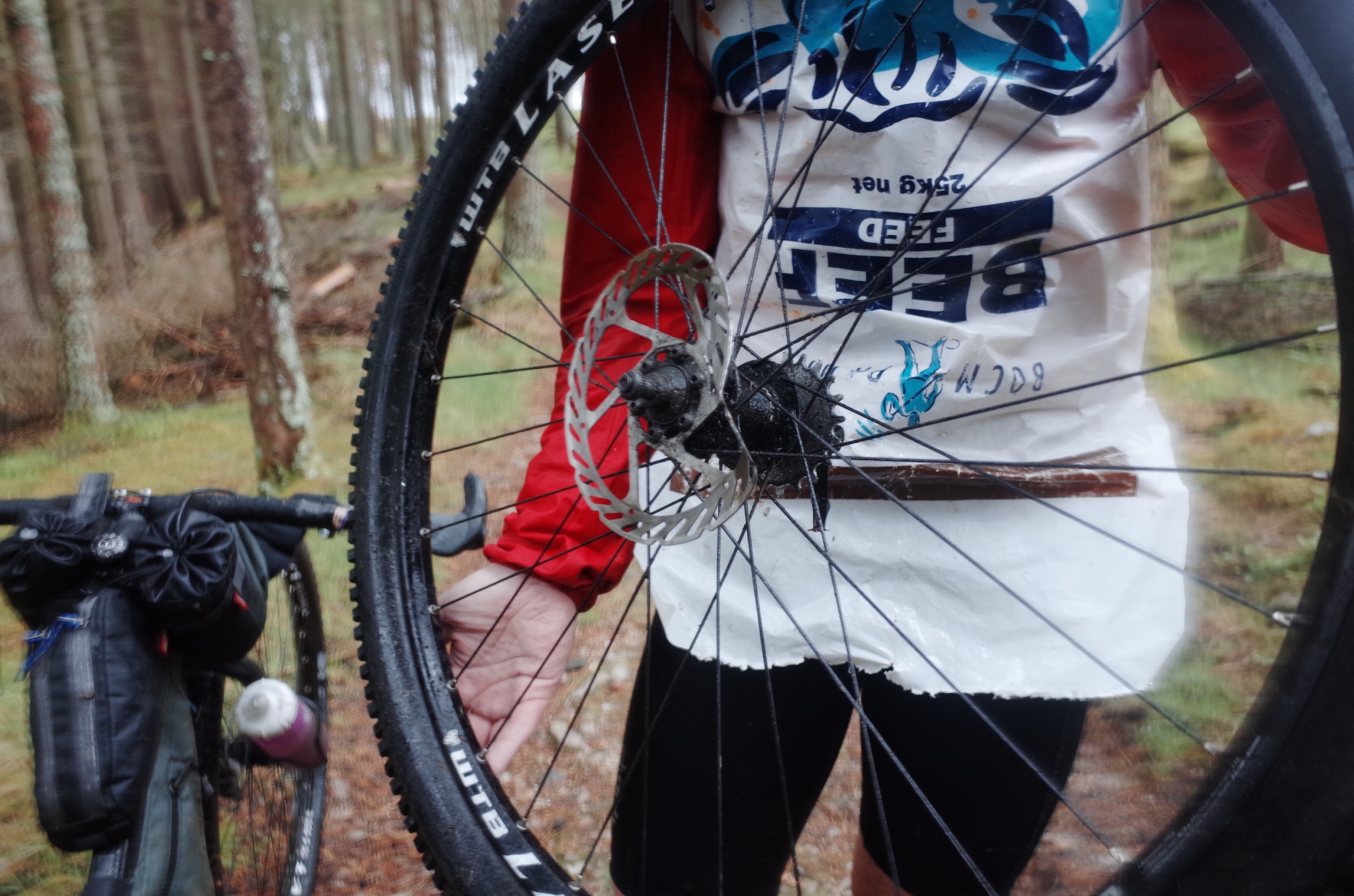 Although the front wheel had taken the brunt of the ditch, during the chaos the rear wheel had managed to pull itself from the horizontal dropout and had found itself under the frame as it was still held in place somewhat by the chain. Unsurprisingly the rotor didn’t line up perfectly with the caliper as Stu came to a halt. The disk was trashed but other than some scratched paint everything else was straight and in one piece. Stu quickly swapped his front disk to the rear and we got moving again. It was still cold and this unplanned 20 minute stop really froze me to the bones. 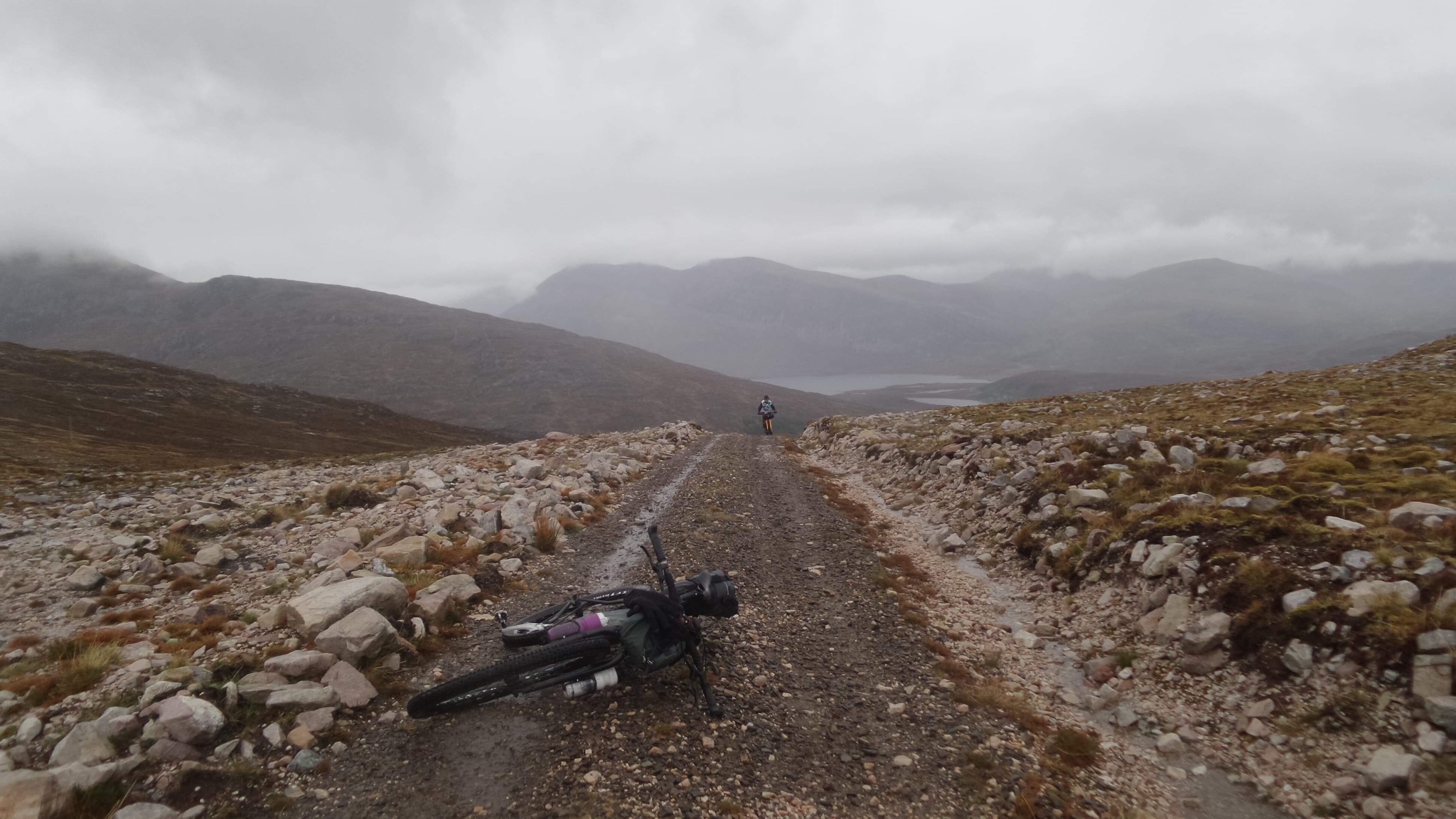 A small section of road connected us to another climb and the misery continued onwards and upward. Now in the knowledge that we weren’t going to be passing any of the upcoming shops before they closed. 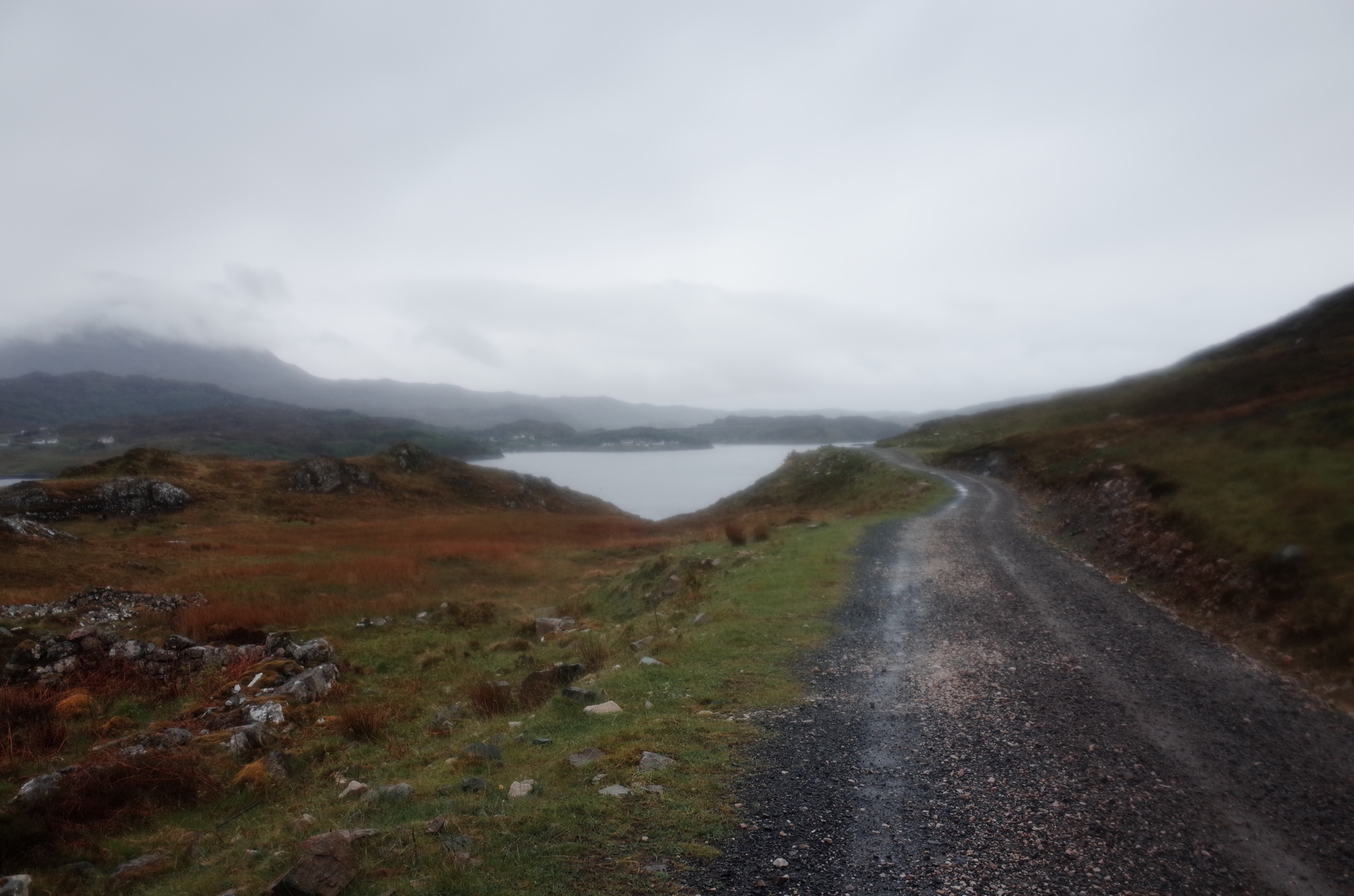 Dropping down the other side and we passed over Kylesku Bridge, the weather was still pretty grim though it looked as if it was finally beginning to pass. The following stretch of road is a double edged sword, we were actually riding our bikes now rather than heaving them up a hillside however the road is far from flat. It rollercoasters along the coast in torturous manner for depleted legs with many steep climbs and all too brief descents. Stu was still full of beans and easily pulled a lead on me along this stretch. At least the sun was out which allowed our sodden clothes to dry in the evening sun. Really other than the legs things couldn’t have been much better. I wasn’t too impressed when the route took us off the hilly road and onto a hilly coastal path along Achmelvich. The trail with its frequent short single track drops and the pushing, broke up the tired leg thoughts. As the sun set we rolled into Lochinver. With the legendary pie shop long closed we strapped lights on and pushed for the Suileag Shelter. 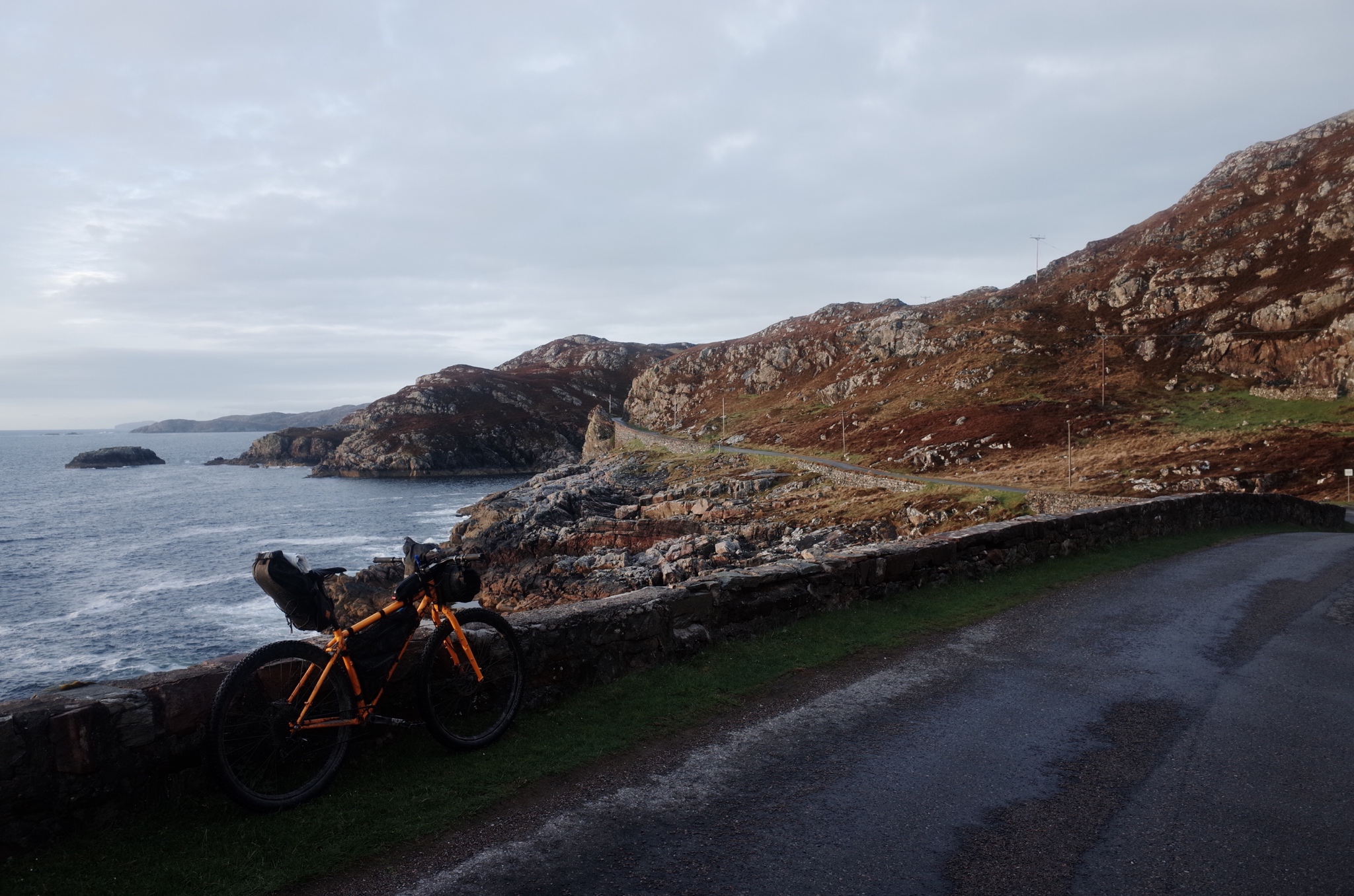 In my head the bothy was very close, a simple 5 miles till food and rest. In reality it took me a solid hour to cover this ground and if it had not been for the threat that it may rain again I am not convinced that I wouldn’t have just picked a spot next to the trail and slept right there.

A small wrong turn just before the bothy in my sleepy state almost resulted in a potentially disastrous overshoot. I stumbled towards the bothy exhausted at around 11:30. Stu was cooking outside in the dark and already had a good start on his dinner. I fumbled around trying to organise cooking and sleeping and all the other bits as quickly and as quietly as possible. It was a busy night in the bothy with bodies filling almost all the platforms as I clattered about in the dark.

Noodles were a terrible choice for dinner as I learned quickly that sporks are incapable of transferring them from pot to hungry mouth. Finally it was time for sleep, I bedded down on the floor glad to no longer be wet or moving. It had been a tough 16 hours on the bike.