I woke at 5am feeling a little perkier, carefully stepped over the sleeping PNT Army on the floor and made my way out. The sun was up but yet to begin warming the land. After fiddling with my GPS for a while I was going again, energy levels were low but the sickness from the day before had passed and I was looking forward to breakfast and a restock in Ullapool. 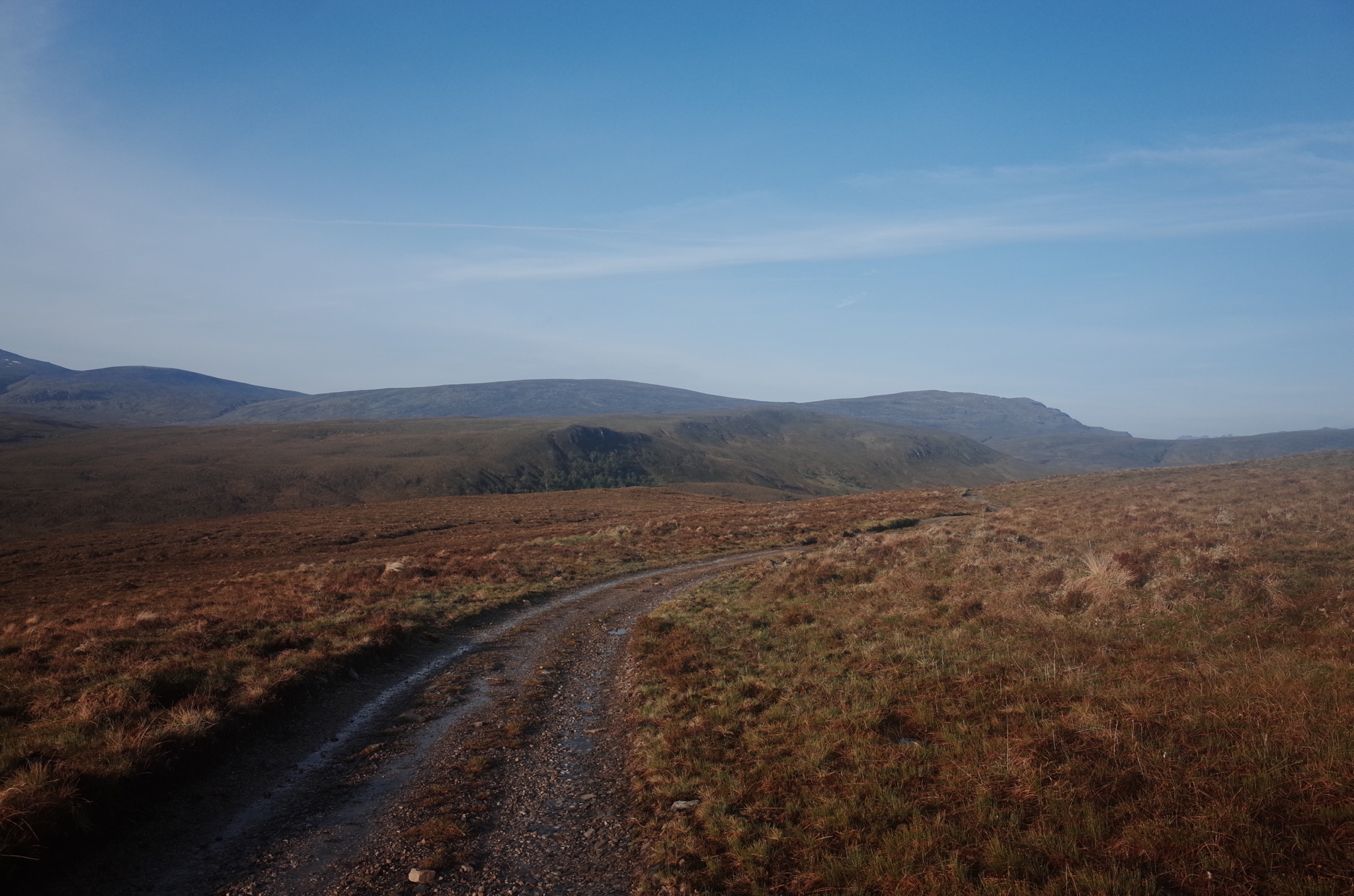 I was in no rush, easing my weary body back into the process of pedalling. The route pulled off the road and took the Ullapool Hill Path. Here I noticed a range of tyre marks in the dirt and pondered whether one of these belonged to Stu. As I descended into Ullapool this was answered as before each drainage gully there was fresh skids, presumably the heavy braking of a HT550 rider with only one brake.

On reaching Ullapool I completely forgot that there was a Tesco and tried to resupply everything from the oddly stocked post office. I was expecting the good breakfast to be a moral boost but instead the enormity of what was still to be done really weighed on me. Thoughts spun around my head that it would be so easy to quit now with Garve station a gentle pedal down the road, no more misery. I attempted to subdue these thoughts by distracted myself with changing brake pads, lubing chain and pumping tyres.

After sitting around Ullapool in despair for far too long I decided to get moving, whether I bailed or not I would need to pedal along the A835 for a bit. Once I got moving, the warm breeze in my face and slurps of my strawberry milk things felt a little more positive again.

Why would I quit now, I am not sick anymore and have a good stock of supplies. If Stu was already ahead he would open up a good lead on me that I would likely be unable to close. I was in control of my own pace now and happy to take things as fast or slow as possible. If I made it back before he drove home, great. If not, I could just get the train. I removed as much pressure of the tasks ahead and broke what was to come into manageable goals. After all this was my holidays and I was meant to be having fun. 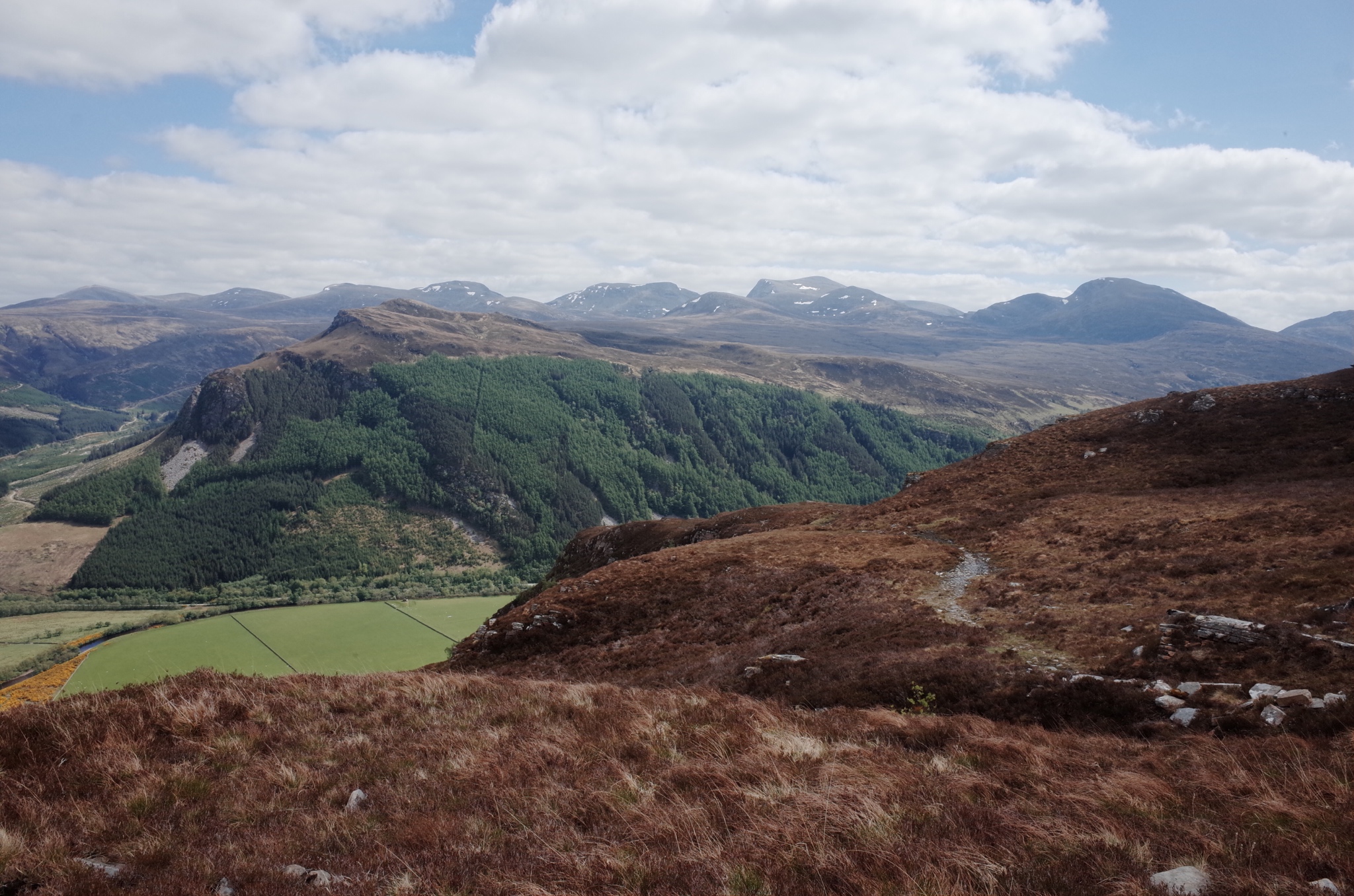 My GPS signalled that it was decision time. Lets do it, I pulled off the main road and headed towards the hills. If I had known more about the area that I was entering I would have probably thought twice but sometimes ignorance is bliss. It was time to tackle Fisherfield.

I asked an old man walking an old dog if he knew the way to Coffin Road and he pointed me through a gate and along the side of a field. I asked him what the track was like,

“No idea, never gone up there.”

I wondered if this was a reflection of the difficulty ahead that a man who must live locally had never dared venture over these hills. 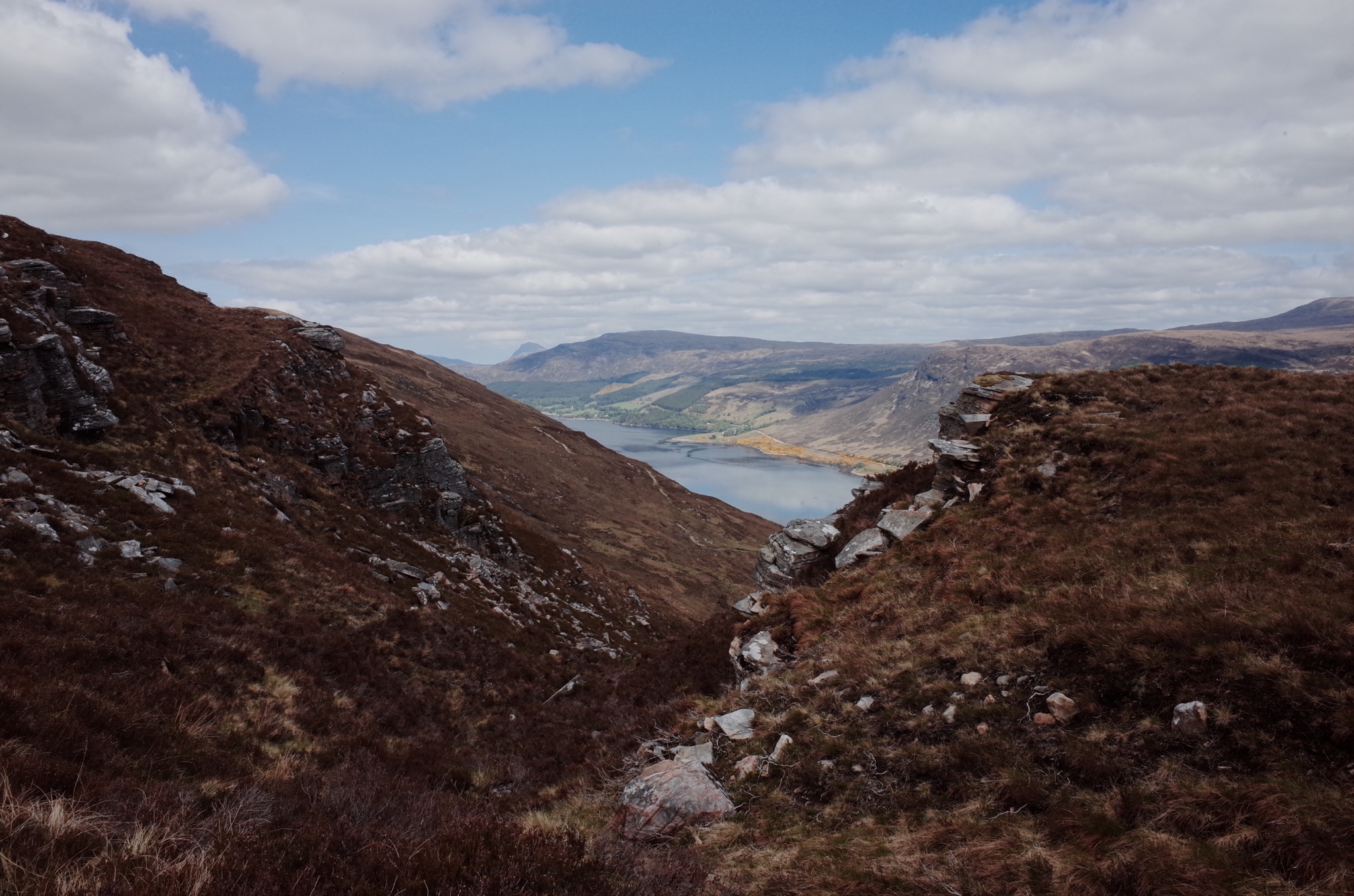 Coffin road is steep and very abruptly lifts you 1300ft above the valley floor. Reasonably surfaced with loose rocks you are often pushing with your hands above your shoulders due to its direct route up the hillside.  Hard work but I was just pleased that it was sunny again and my breakfast was comfortable digesting. 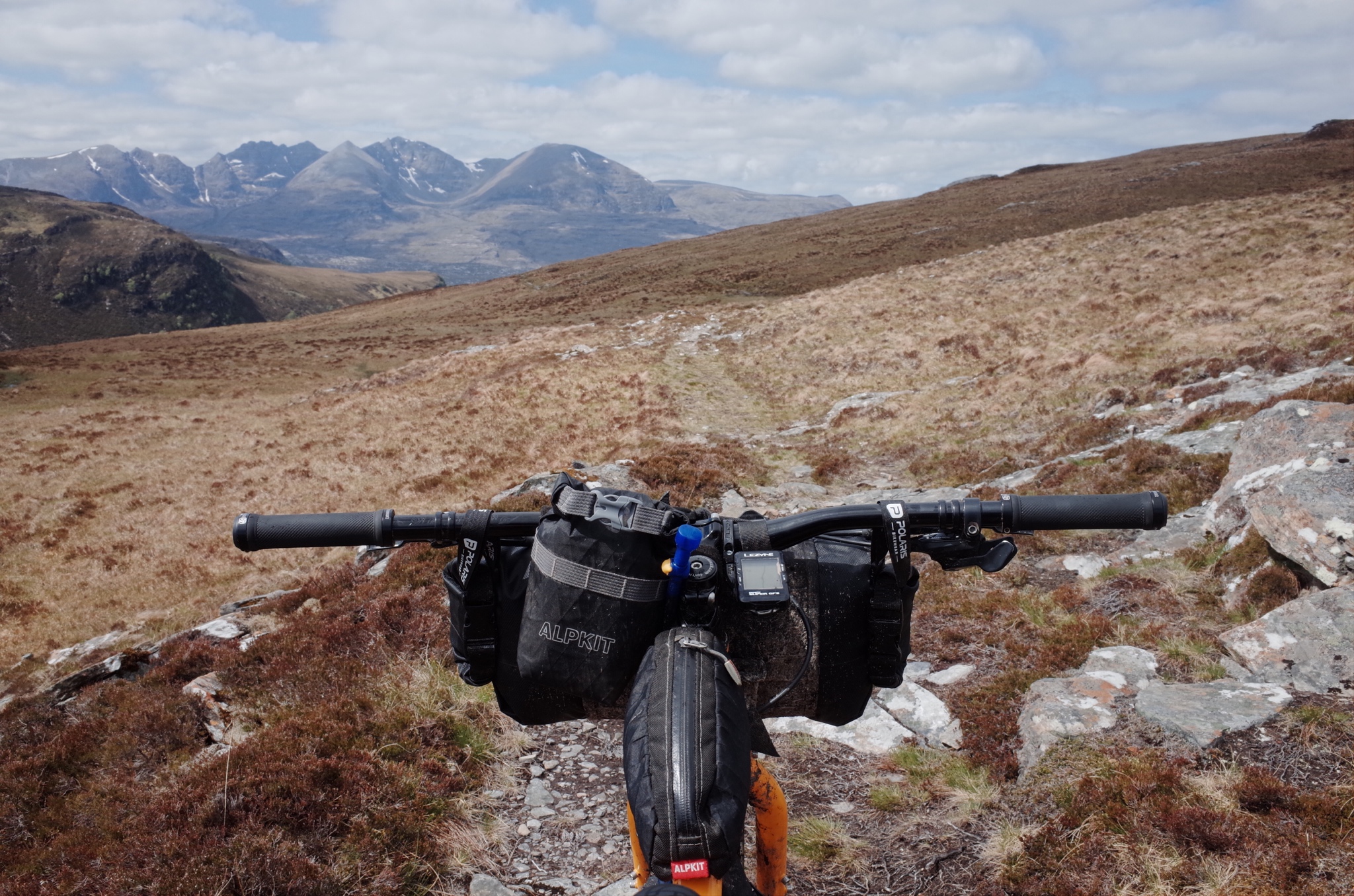 The top revealed stunning mountain views, their beauty slightly tainted by the thought that I would be working my way through them shortly. The Kirk Rd descent down the other side distracted me from future struggles and I got involved picking my way along the bare hillside and then down through the grass and sparse trees. Letting off the brakes, the Karate Monkey picked up a little speed and I felt its excitement to be free. I remembered bikes could be fun, I had made the right decision to continue. The first part of the climb towards Fisherfield was easy going, lowish gear engaged I made good progress through the shade of the woods. A spot of lunch and a little siesta on a bridge before continuing the remaining climb which of course consisted mostly pushing. Cresting the climb I found myself on a scorched and desolate landscape. Tyres crunched, wind whistled and there was nothing else up here. I felt as if I was hundreds of miles from any other human being, forging my way across the desolate landscape. 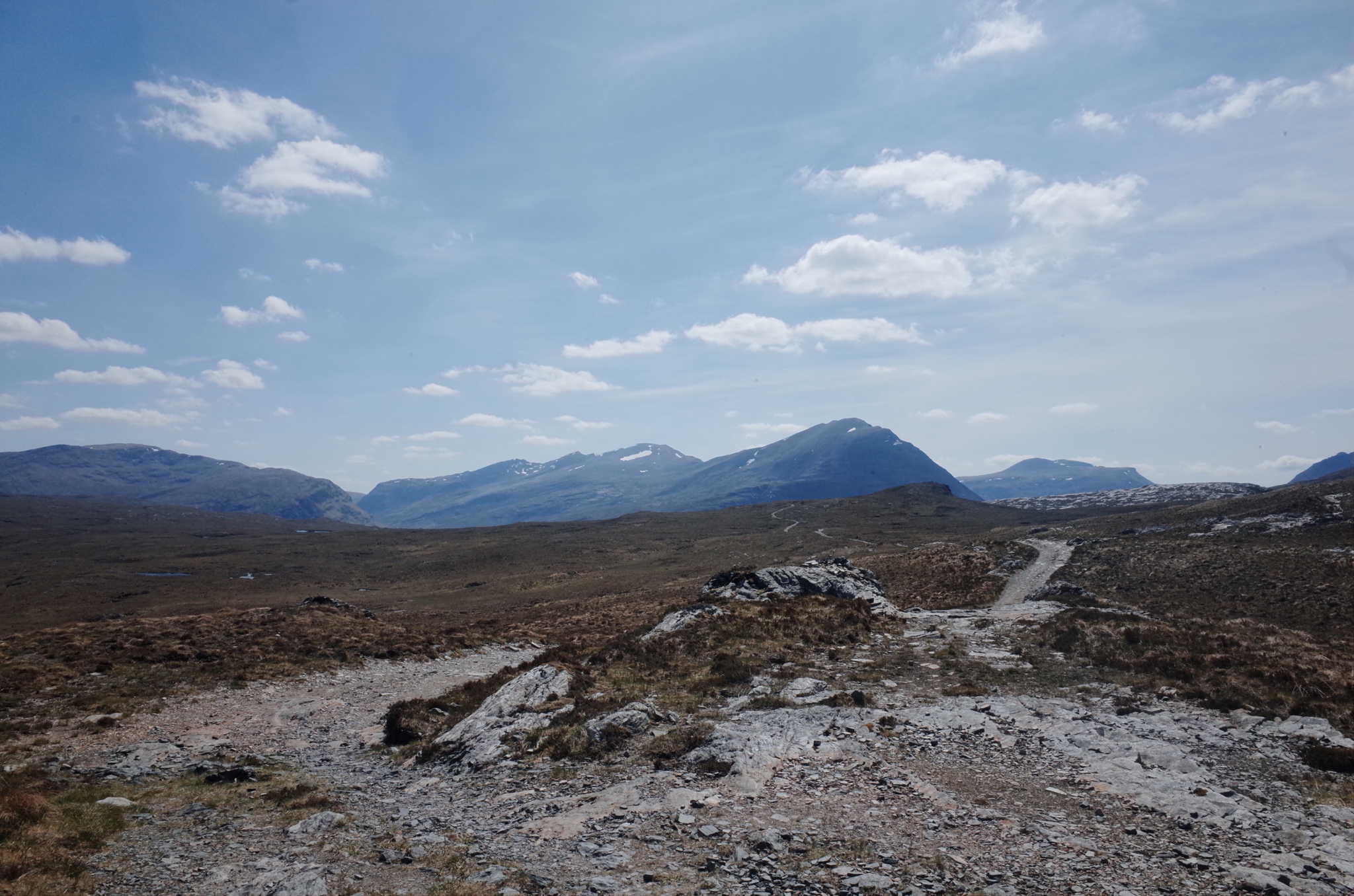 After the cloud cover on the northern loop, other than Ben Alder the big mountain views had been allusive. Once the trail flattened out again at the bottom of the valley floor Fischerfield looms over, you really feel in the middle of these giants. Becoming an insignificant dot surrounded by mountain walls that tower above trapping you inside. I passed the dilapidated Auchneigie cottage where I interrupted a nude man sunbathing and made my way to Shenavall Bothy to poke my head in. 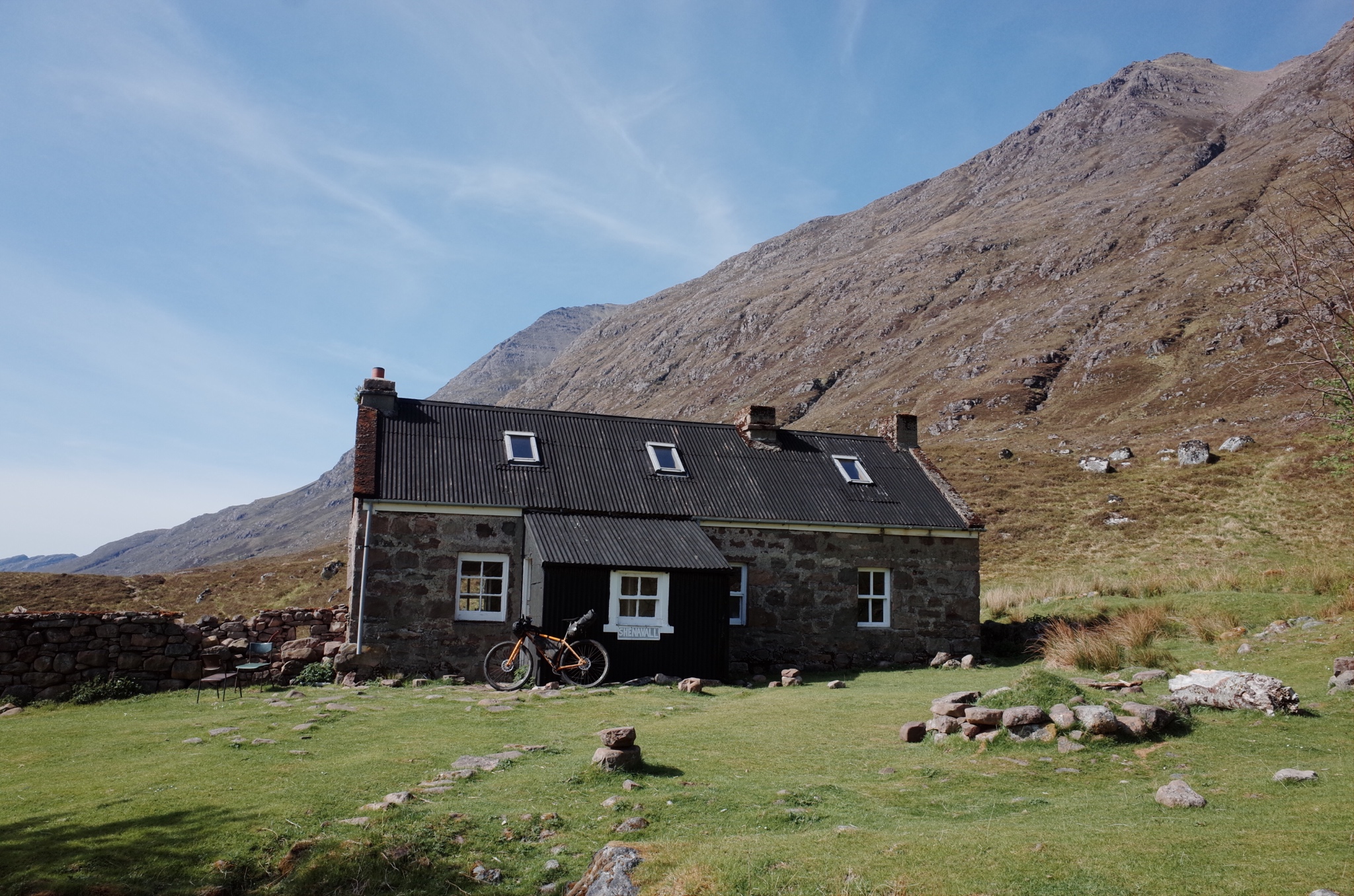 I wished that I had been able to stay longer, go for a swim and relax in the evening sun but I still had enough of the day to get some good miles in. This is certainly a bothy that I would like to visit again, to roam the surrounding mountains by day and sleep in the peace and serenity of the valley floor. 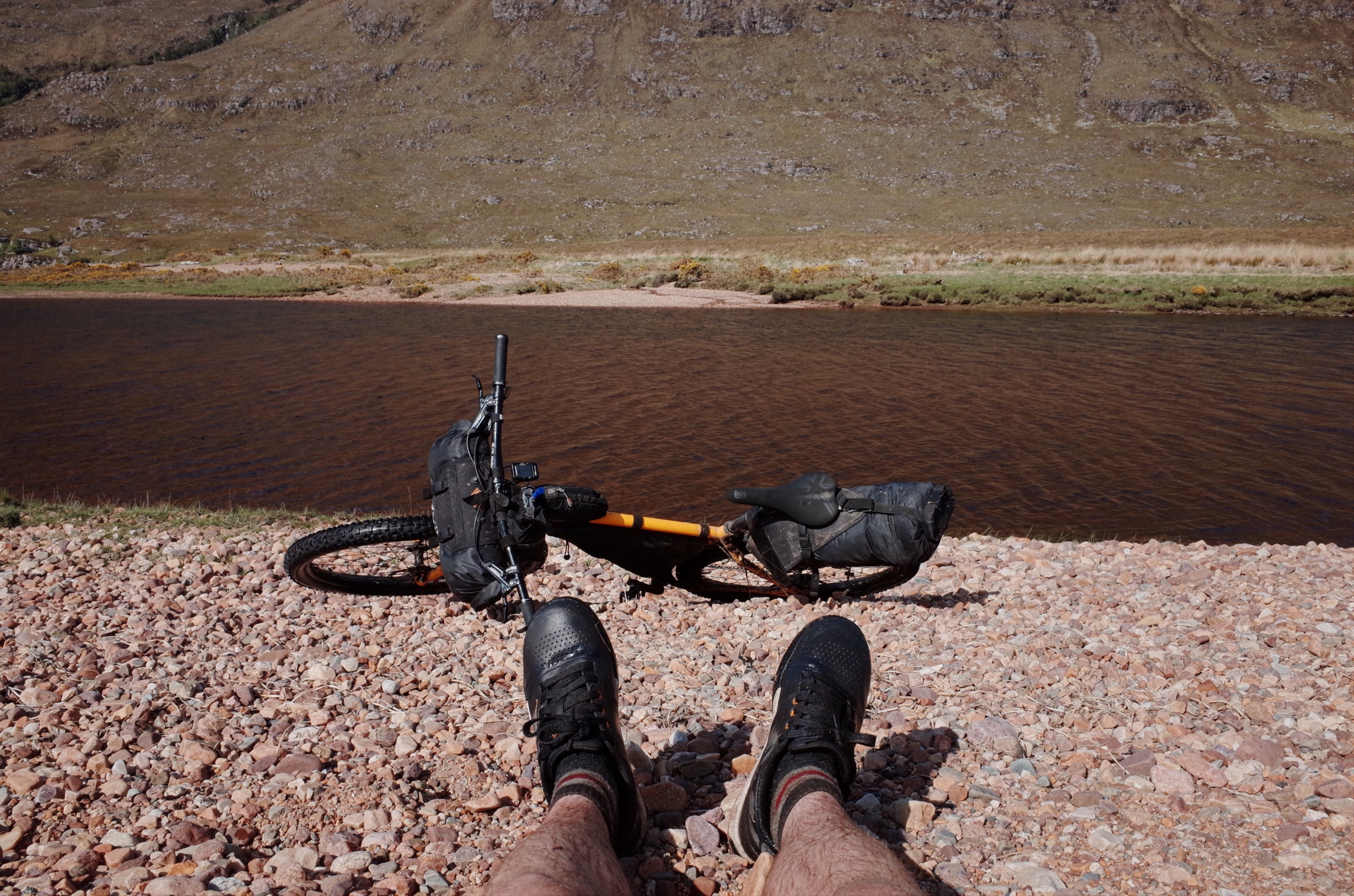 I reached the shore of Loch na Seaiga and followed the beach to a river crossing that I had been anticipating would soon need to be tackled. Even in the relative dry spell it was wide. I had heard tales of rainier days and routes being completely blocked by water, forcing riders to turn round and reassess plans. It was time to get my feet wet again. I rolled up my shorts as much as possible, shouldered my bike and waded in. Today the river was not going to stop me but the cool water still came up high on my thighs. 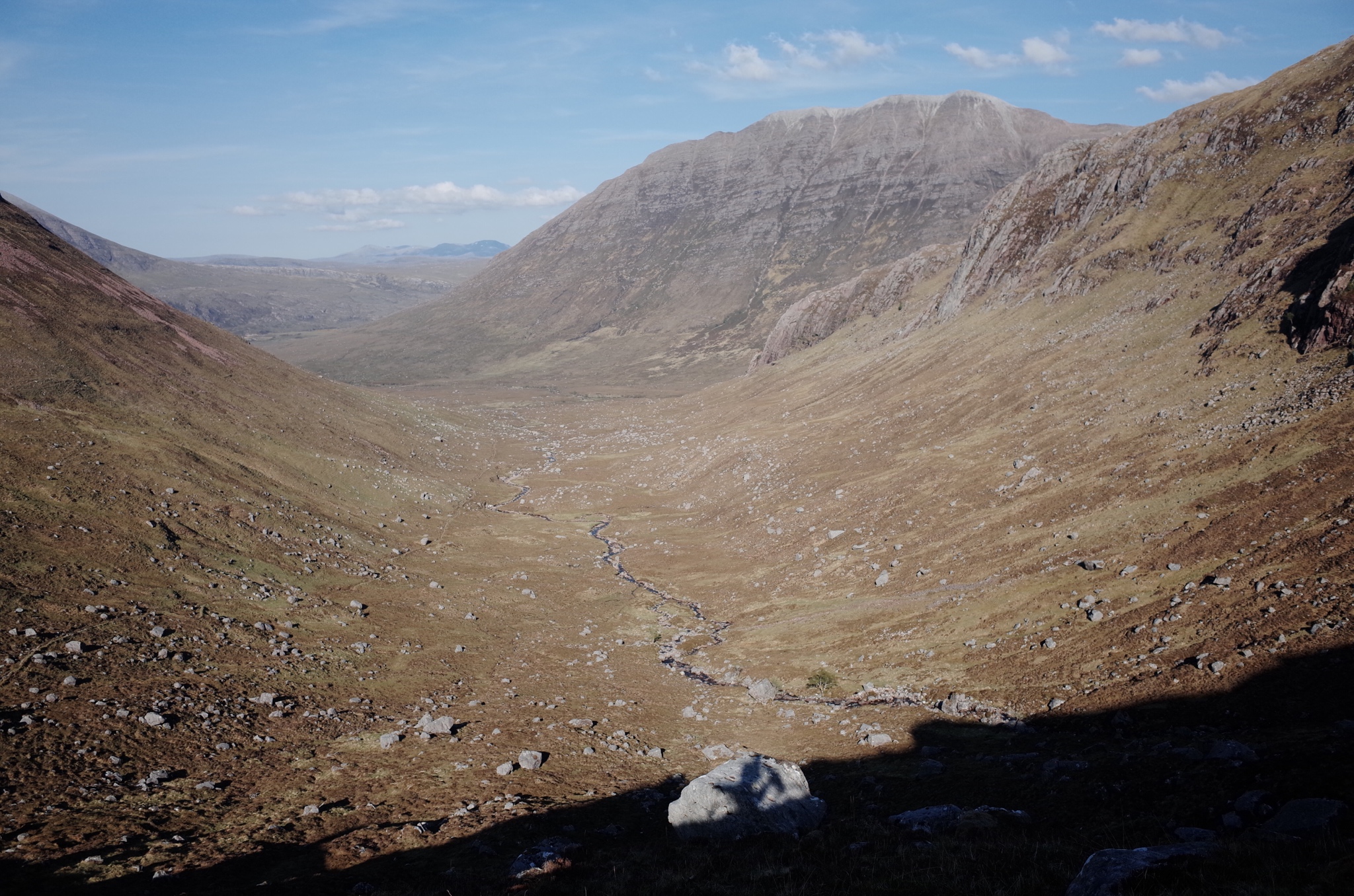 Your kidding yourself if you think that you are going to be able to escape Fisherfield without some significant exertion. I pedalled along the side of a river for a while until the valley floor ran out and the path pushes towards Loch Beinn Dearg before the steepness ramps up even further. I made good time on this ascent as I wanted to clear Fisherfield before dinner and as the shadows started growing longer so was the hunger levels. I was also determined that the hikers that were on the path below me were not going to overtake. On reaching the top I still felt pretty good. My tummy felt stable and I must be becoming  more mentally resilient to all the hike-a-biking although my right knee had seen better days. As I looked over the stunning scenery ahead of me I knew that the worst of the day was now past and there would be a nice descent to finish off the mountains for the day. My camera ran out of battery so no longer distracted with taking pictures my mind now began turning to tomorrow and Torridon. The goal of the evening was to get as close possible to give the best chance of clearing those mountains in one. Much ill-informed cycling maths was processed in my head to try figure out distances, times and shop stops. 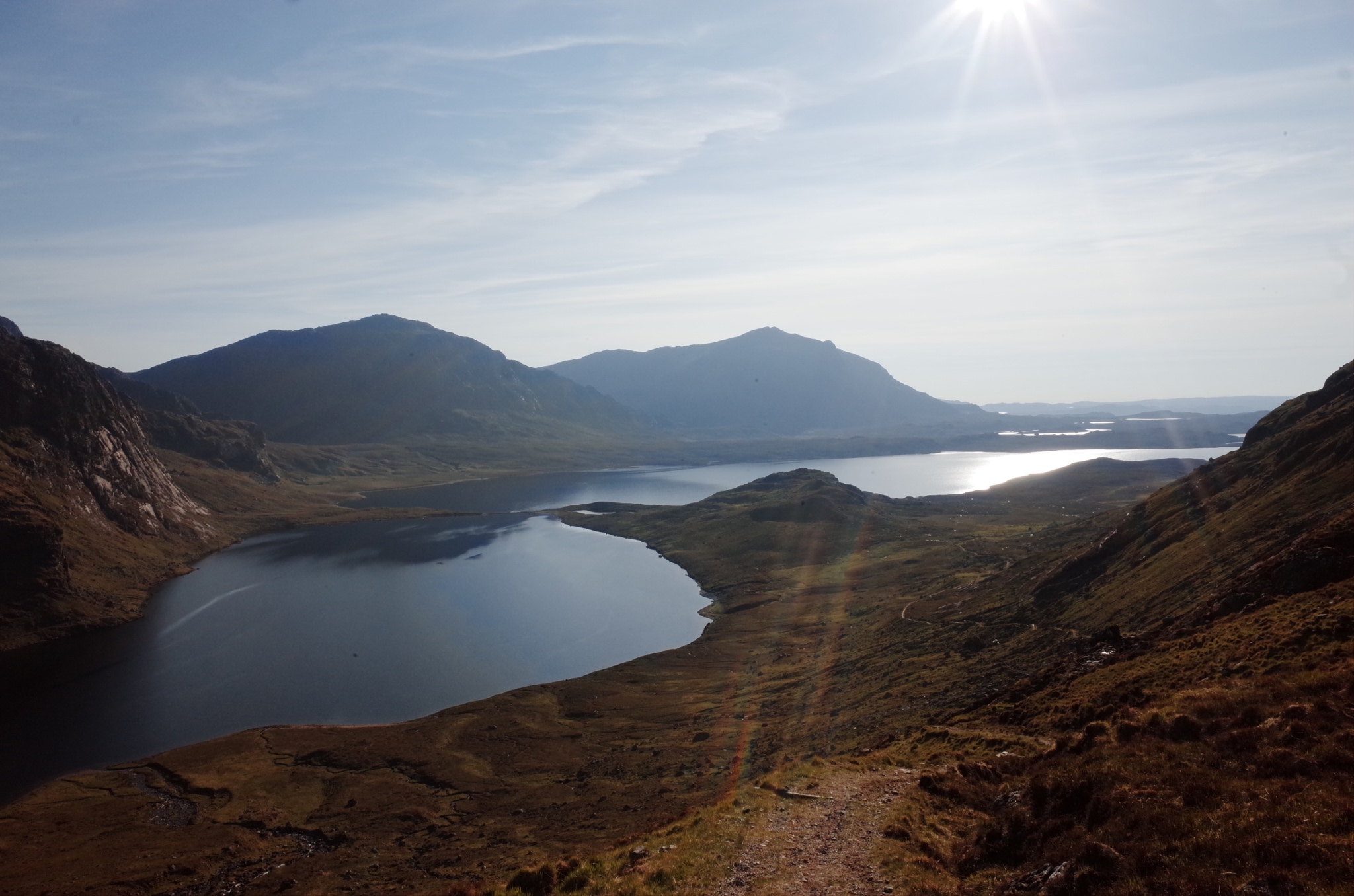 The descent towards Dubh Loch was was a lot of fun. Edging down the side of the mountain allows you to pick up speed and although the path is interspersed with the odd stream crossing, technical feature or ever present water bar there is not really anything to cause much worry.

All too soon I was crossing the causeway between Dubh Loch and Fionn Loch and leaving the mountains, Fischerfield wished me goodbye with a surprise over the bars tumble. Luckily no damage, i dusted myself off and slunk away

The route now heads left and drops down to Loch Maree on the Postmans Path. I was following the .GPX from the HT550 website which instead takes you through Poolewe. A quiet little village, no need for me to stop as it was late in the day and the shop was closed. Onward and I picked up the Tollie Path. The temperature was starting to drop but warm colours from the setting sun filled the sky. I was not sure how long this path was but hoped that I would make the road on the other side and be able to check off some easy miles in the dark before bed.

Tollie Path clears a low saddle between the hills before heading back to the loch shore. I kept my eyes on this transition point over to the last descent of the day. I stopped for a quick nature break once I reached a point that I was far enough from the road. Less than 5 minutes back on the bike pedalling before there was a massive internal rumble, something major wasnhappening. Leaping off the bike I dived towards the heather, bibs were pulled off and my body rapidly emptied everywhere. On and on, it felt as if it would never stop.

Finally it was safe enough to pull my bibs up and I carefully carried on. It was now closer to 10 and becoming dusky. Movements were cautious and sudden jerks felt risky. I was very aware that if I wanted to make the road without relaying on lights too much I would need to maintain a good pace but really didn’t want to shake things up too much.

Other than a few false alerts I made the top. I had been hoping for a smooth path similar to the one just climbed, something that could ideally be descended sitting down. It was not, instead large exposed rock slabs would give way to chunky roll outs. Balancing my delicate state and the desire to get to the road before dark I trusted the bike and  hoped that it would guide me well in my clenching auto pilot mode. The Karate Monkey delivered me to the bottom safe and clean. It was getting very dark now.

I had reached Slattadale forest. As I rolled into the car park I knew the next section was road but I was now tired and fragile. I spotted a small building in the trees, an out of service public toilet with a disabled facility that was just clean and spacious enough for me to bring my bike in and lay my mat down. I was just pleased to be settled. I fell asleep mid dinner, woke up, finished my now cold rice and climbed into my sleeping bag. 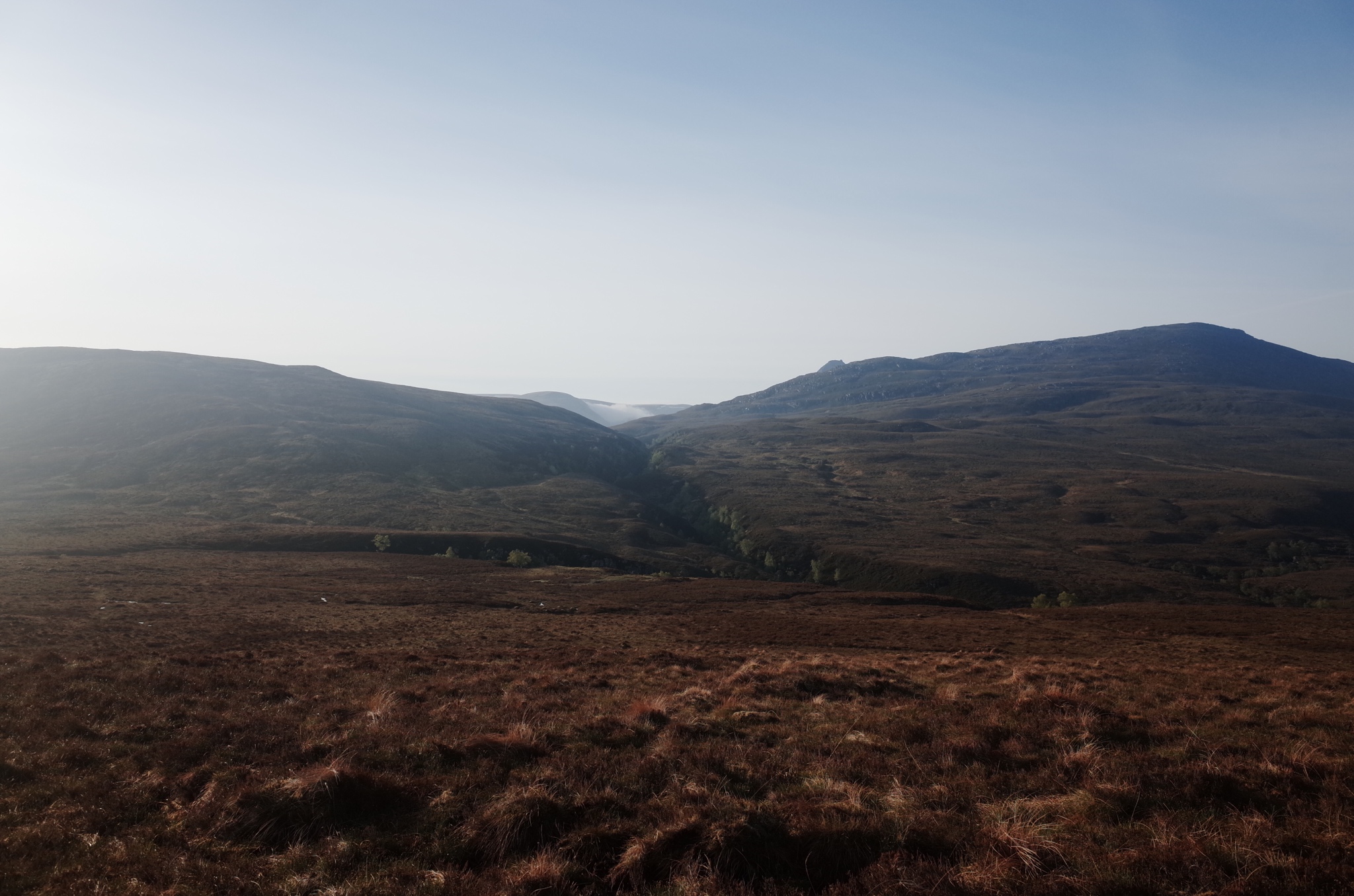 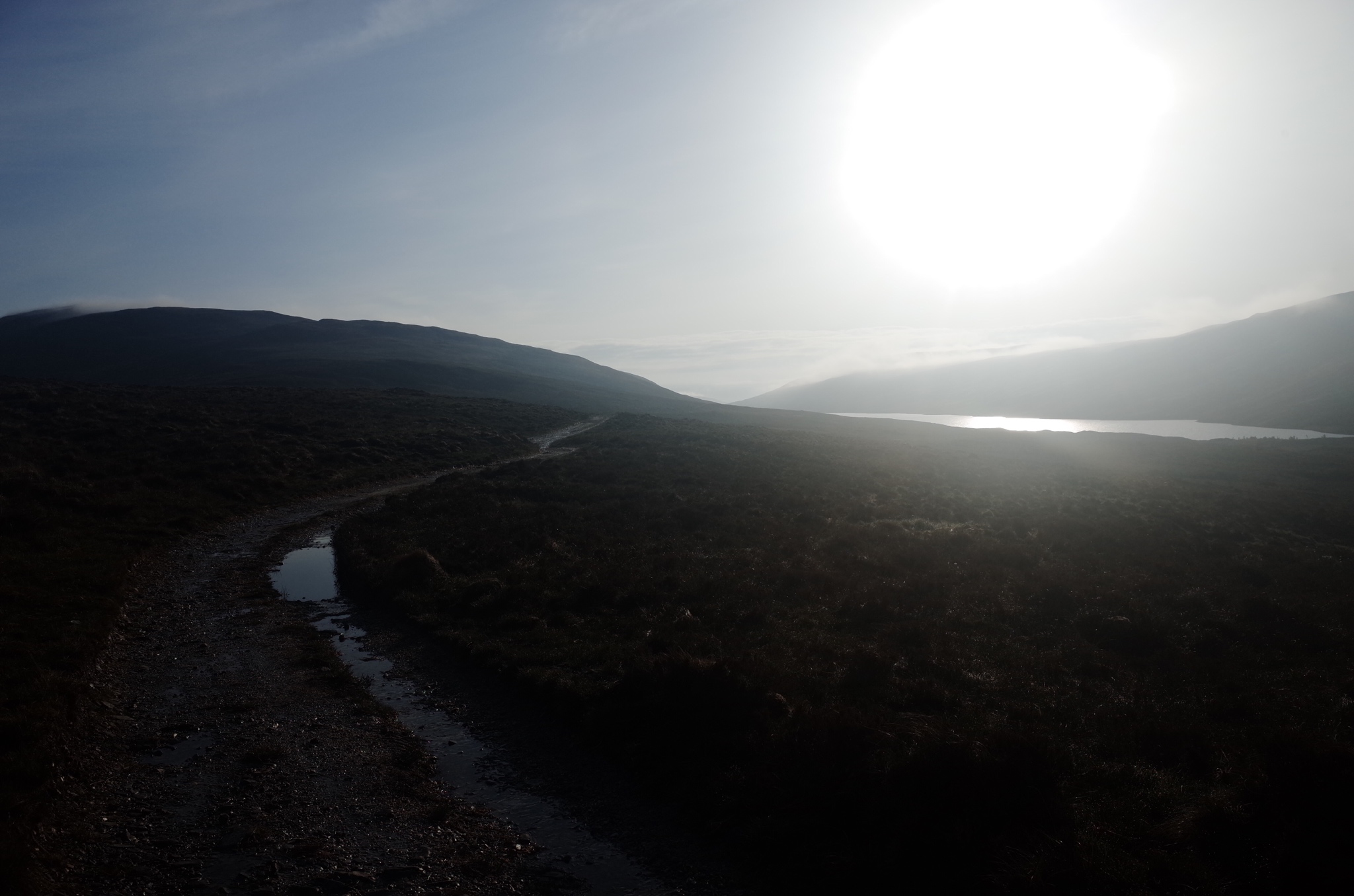 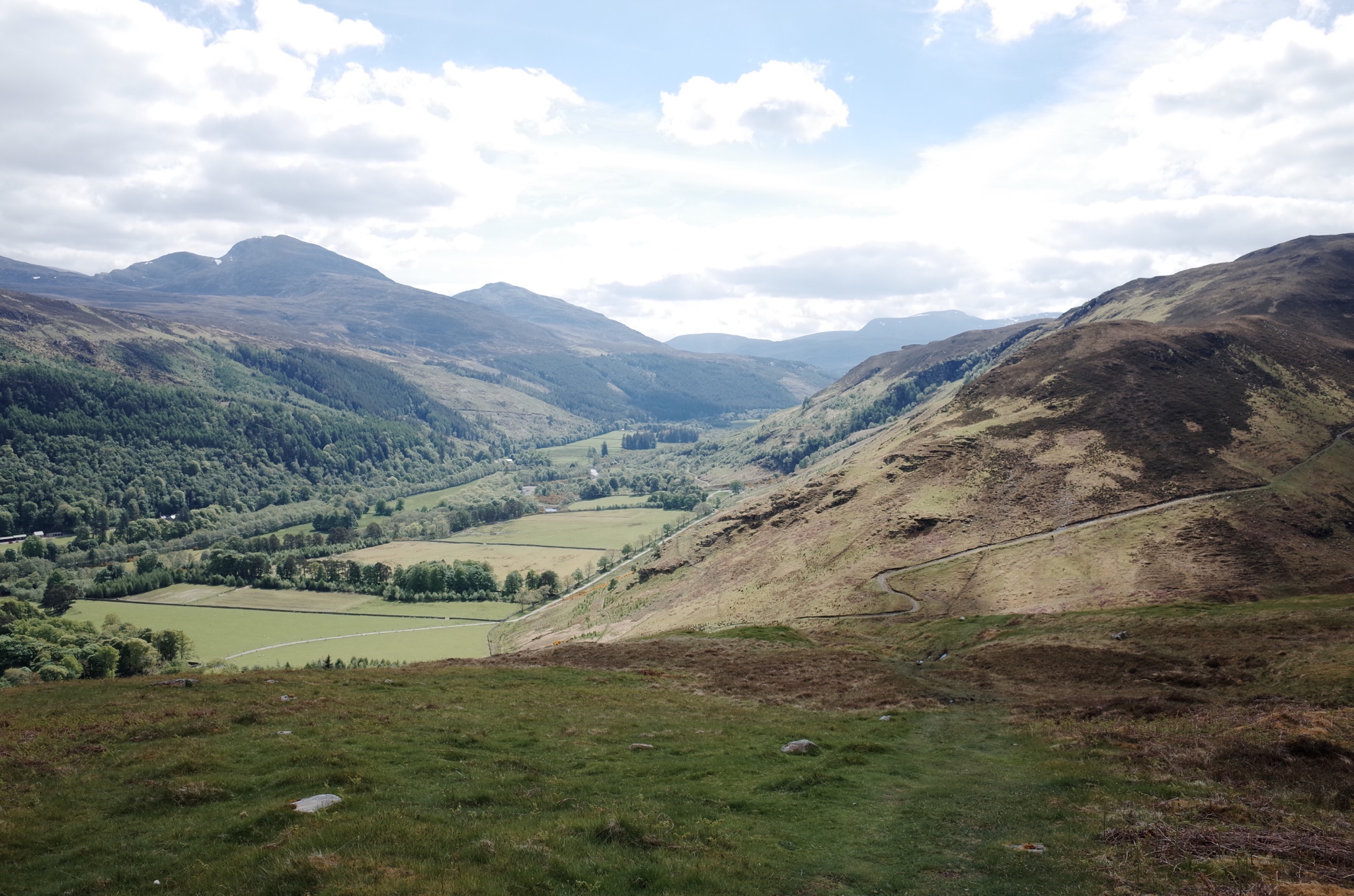 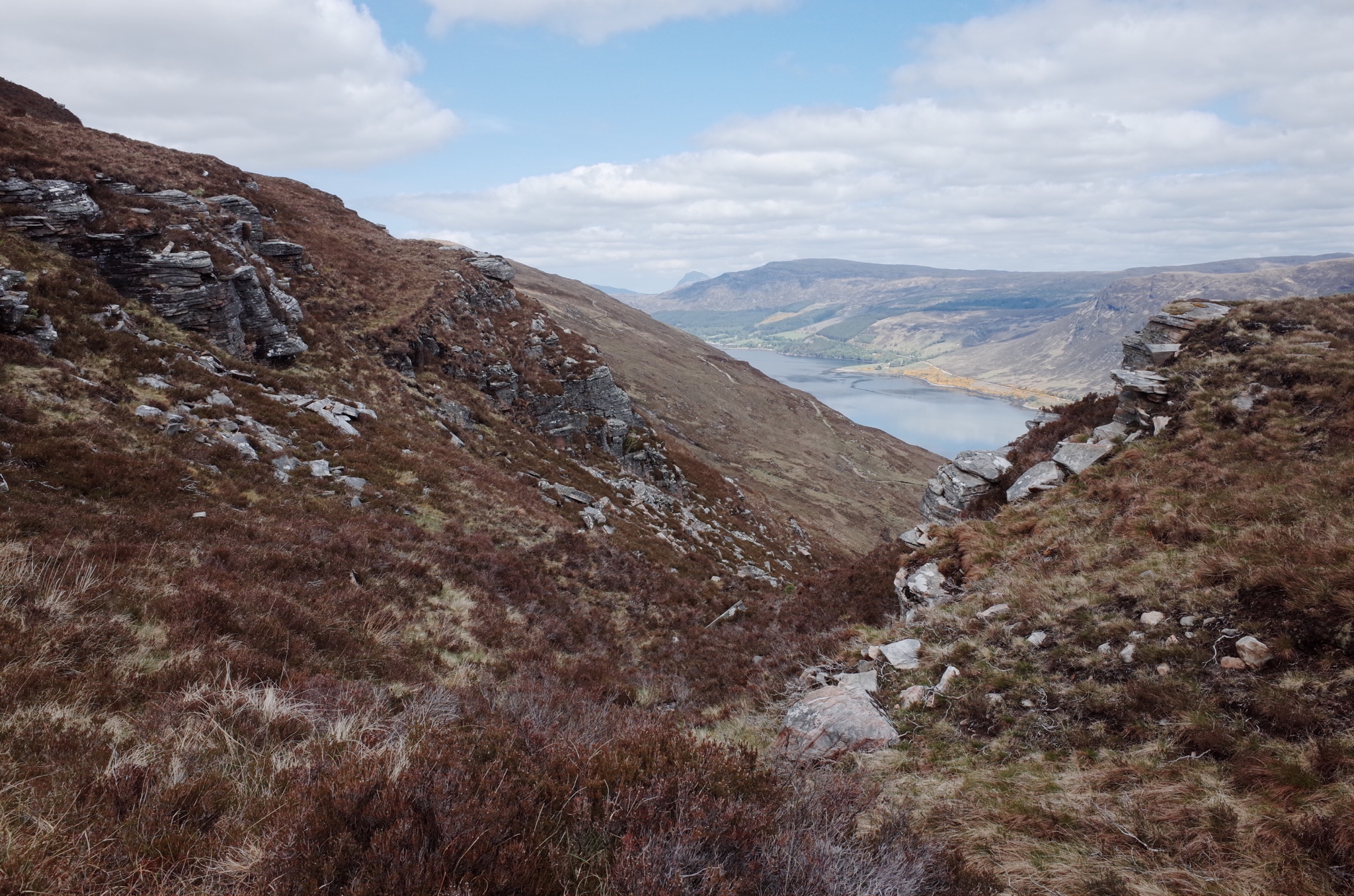 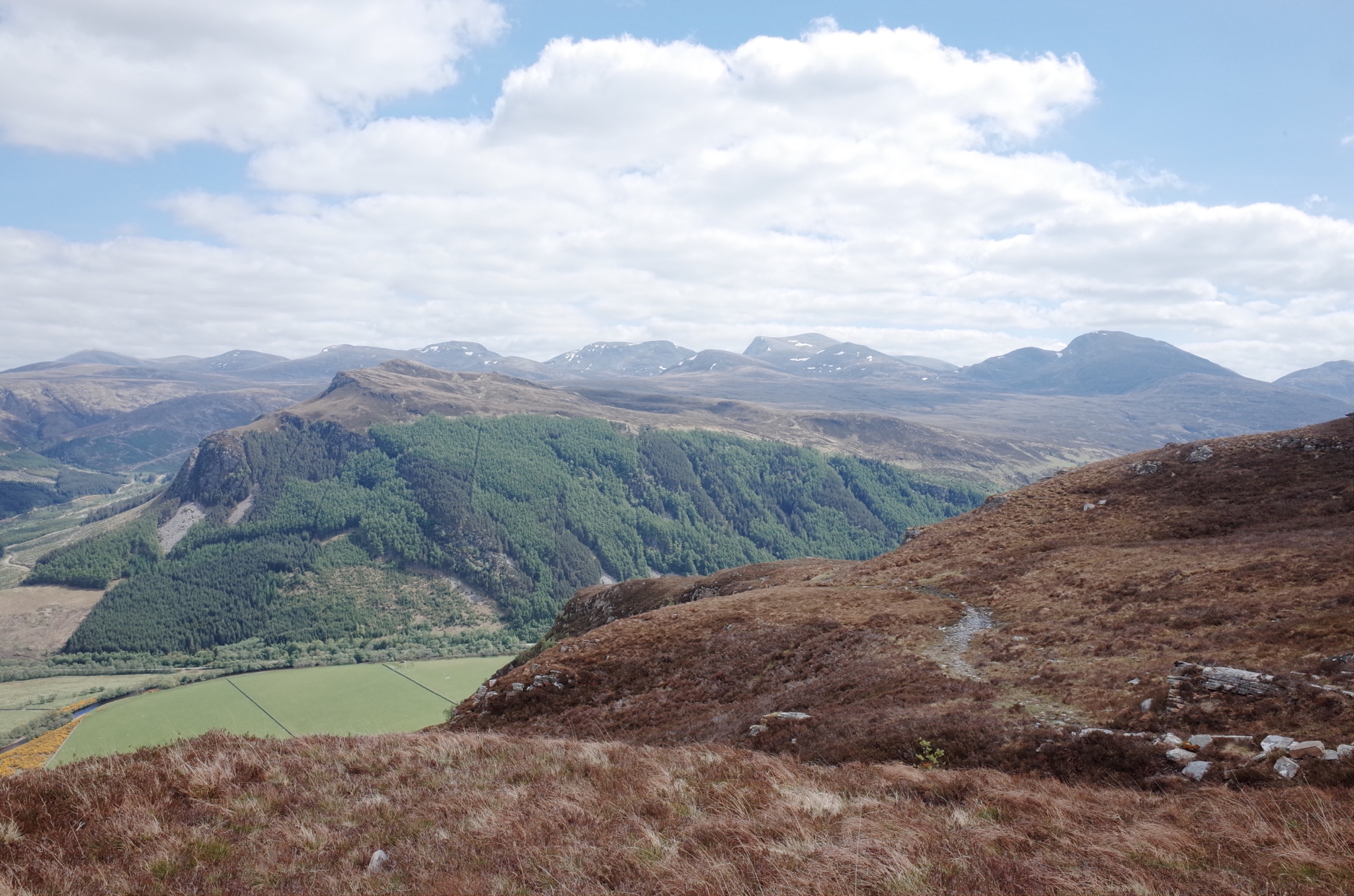 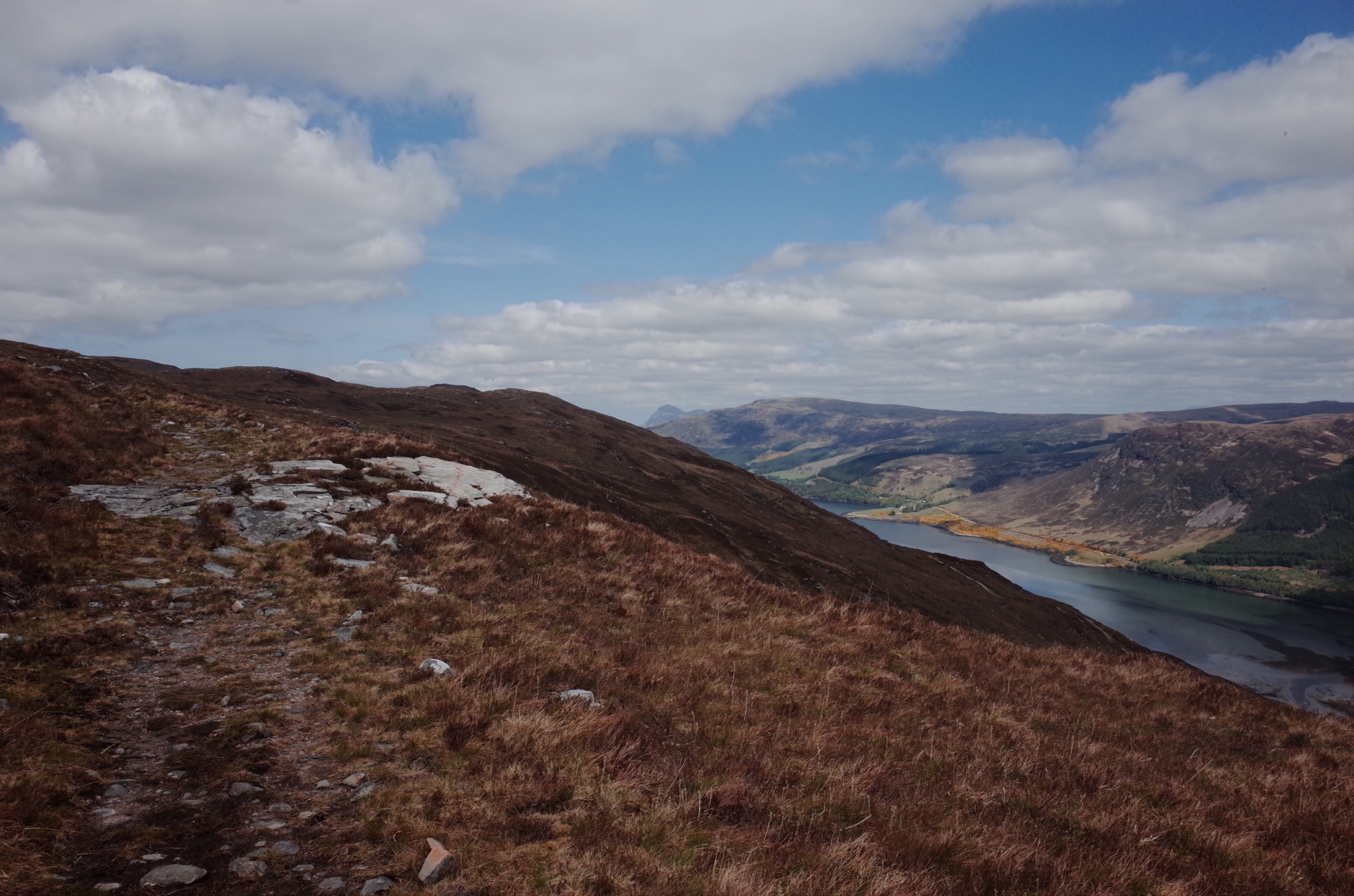 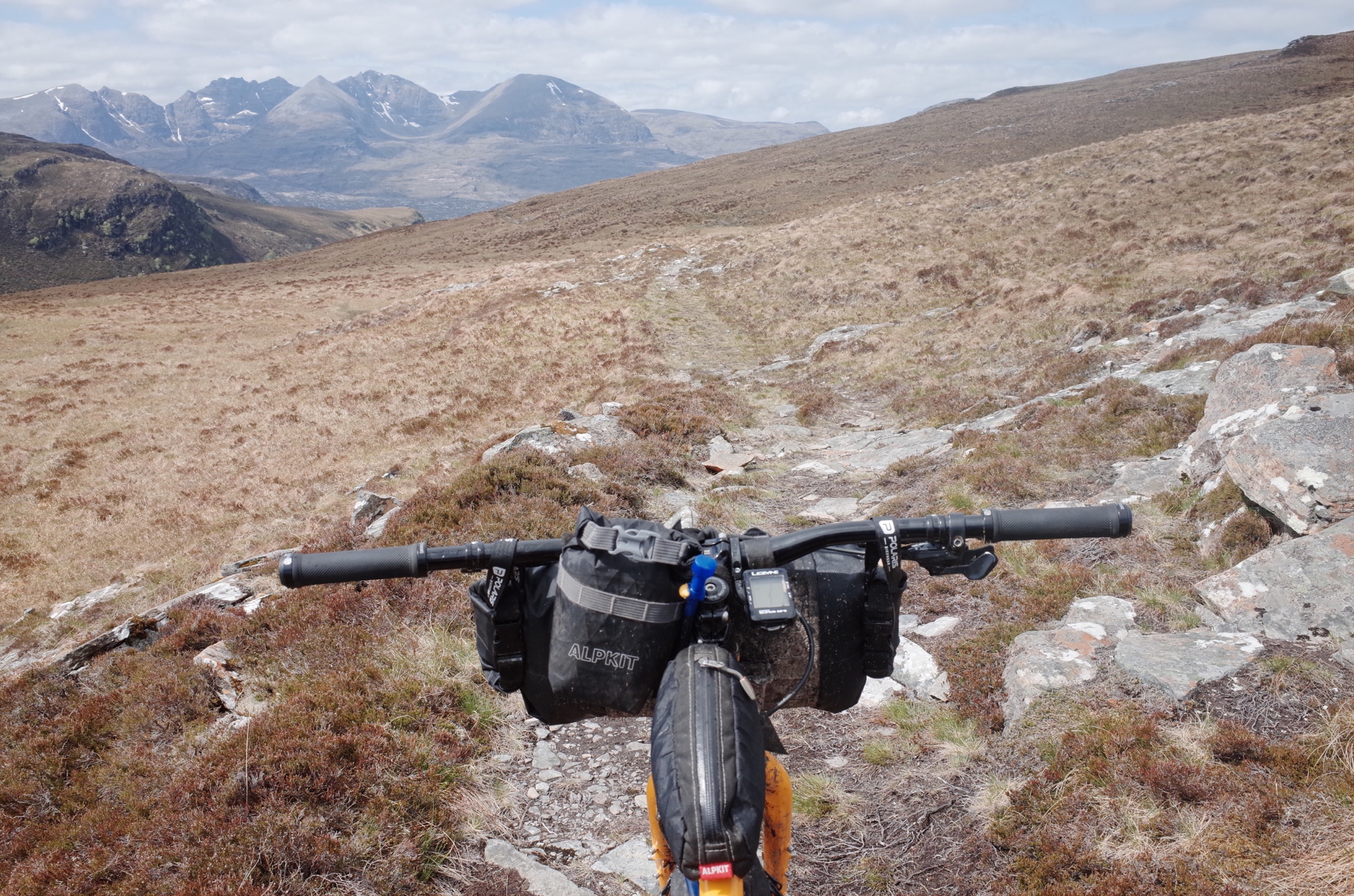 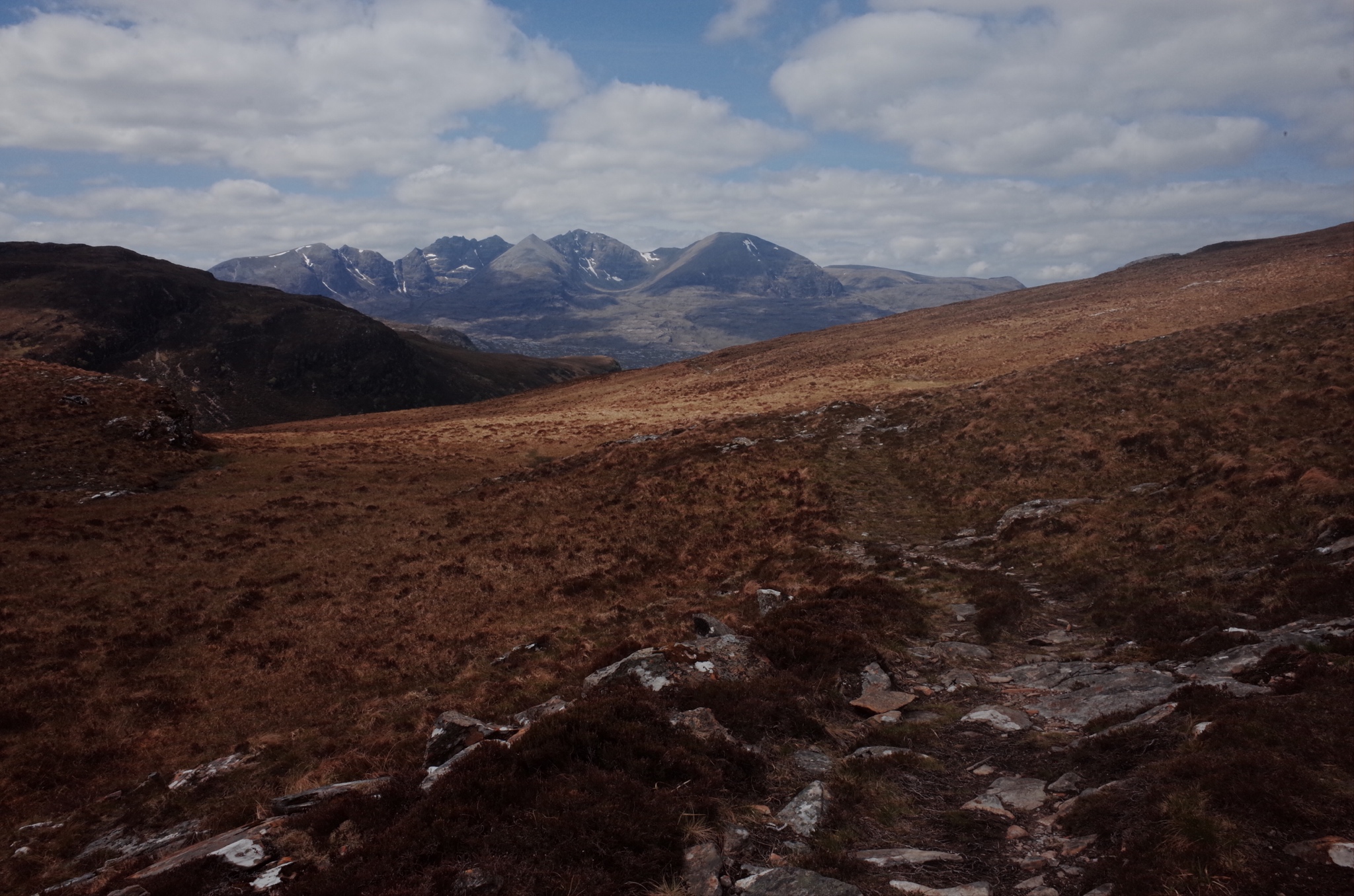 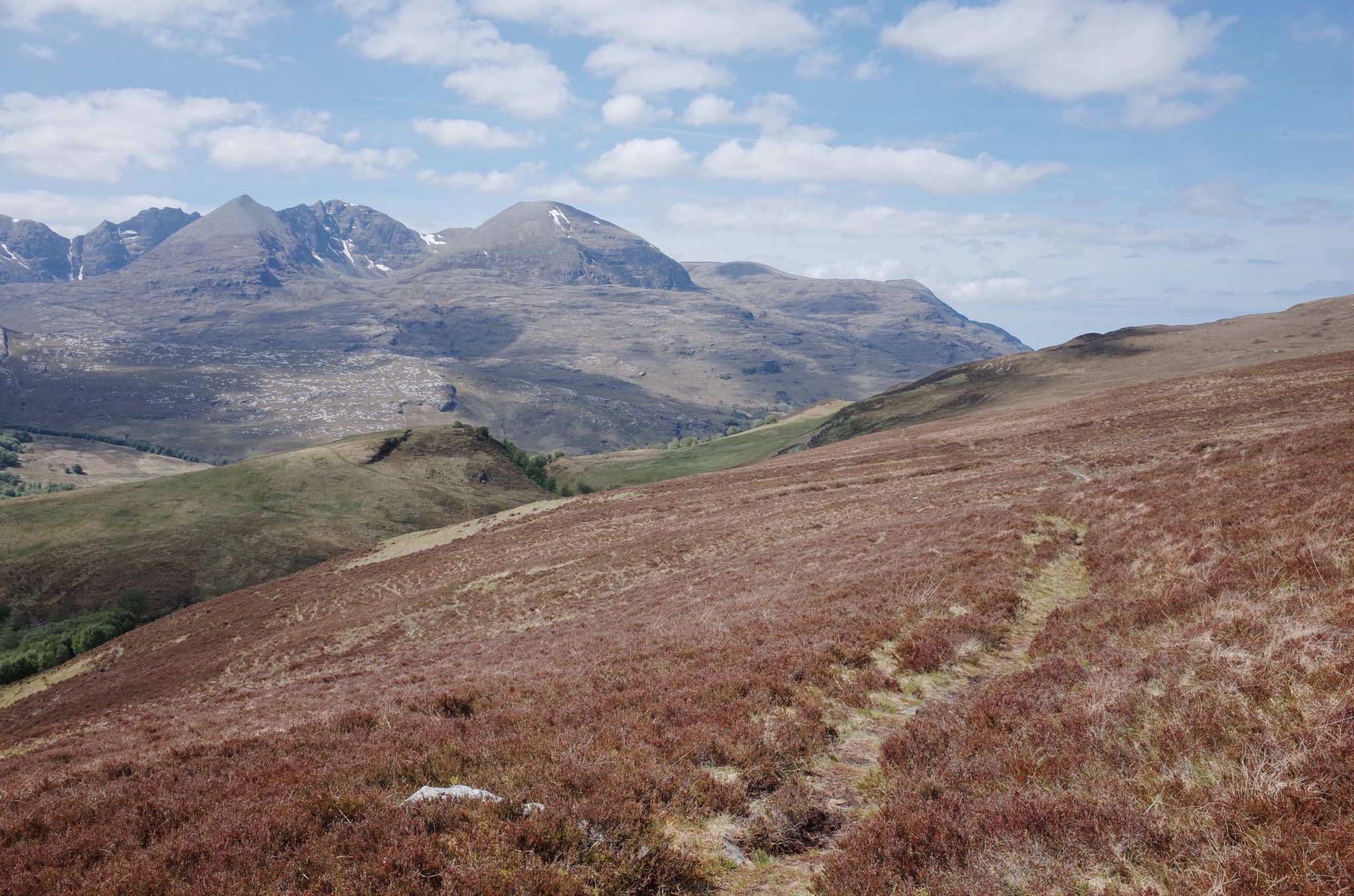 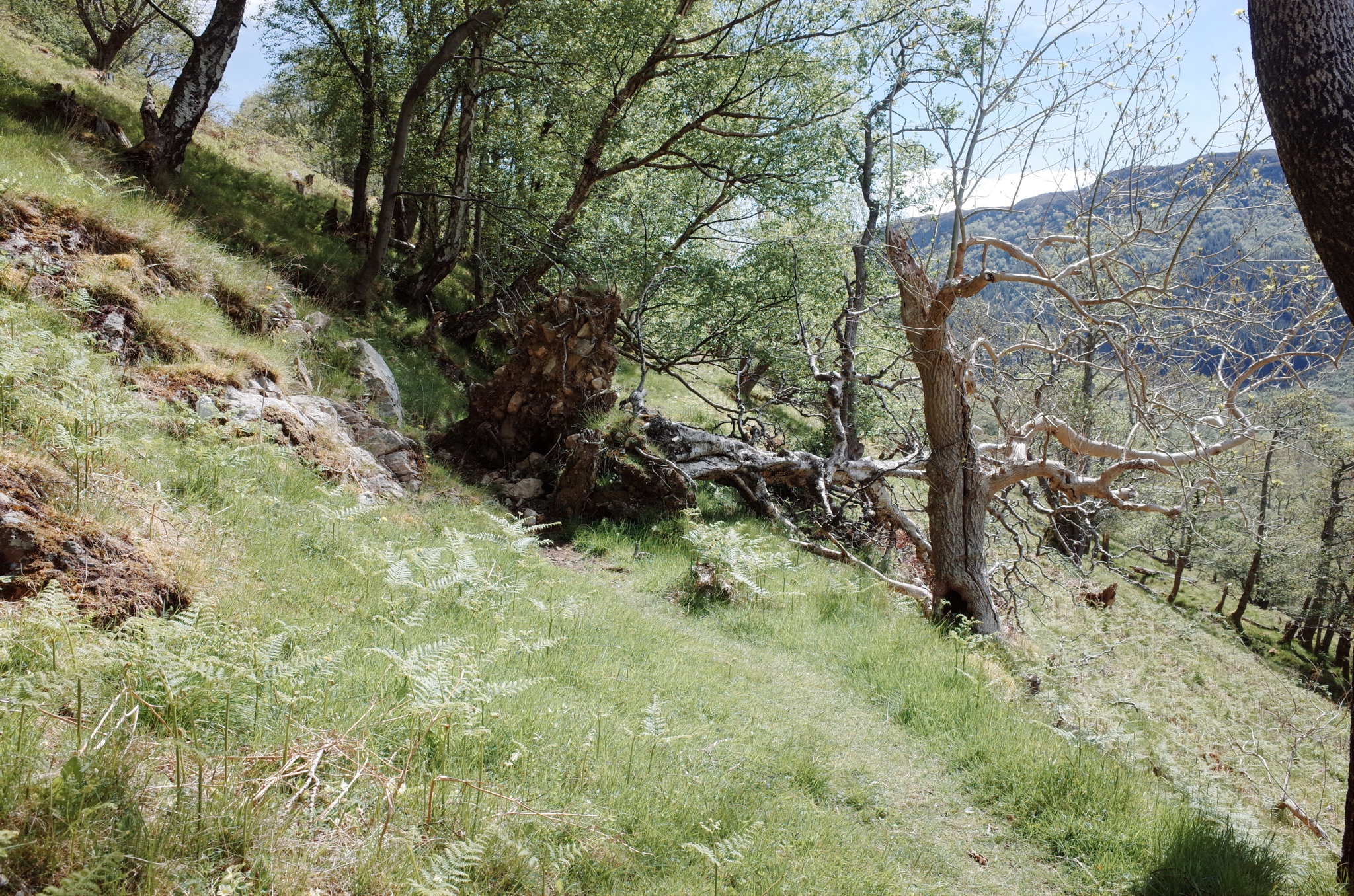 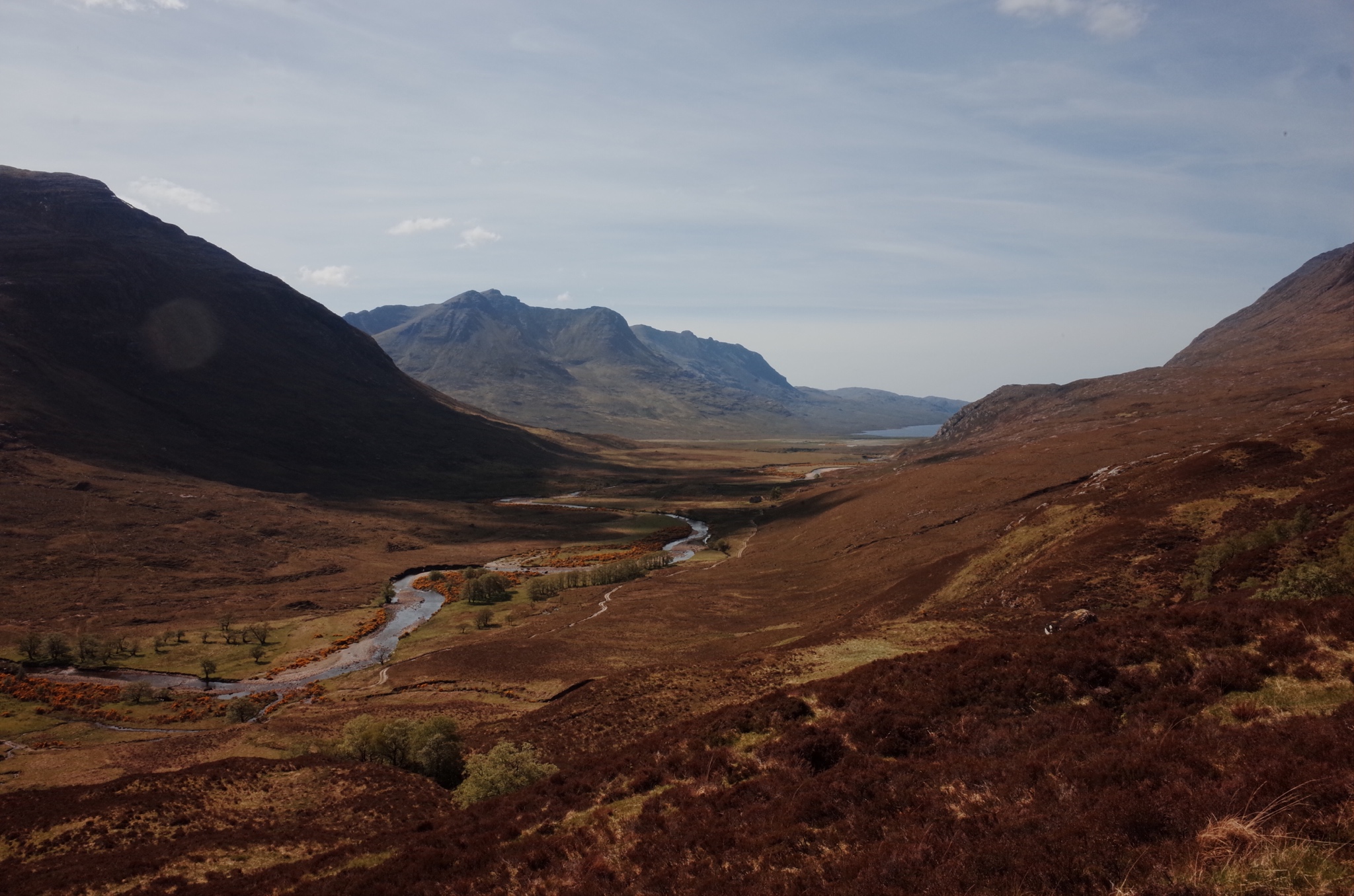 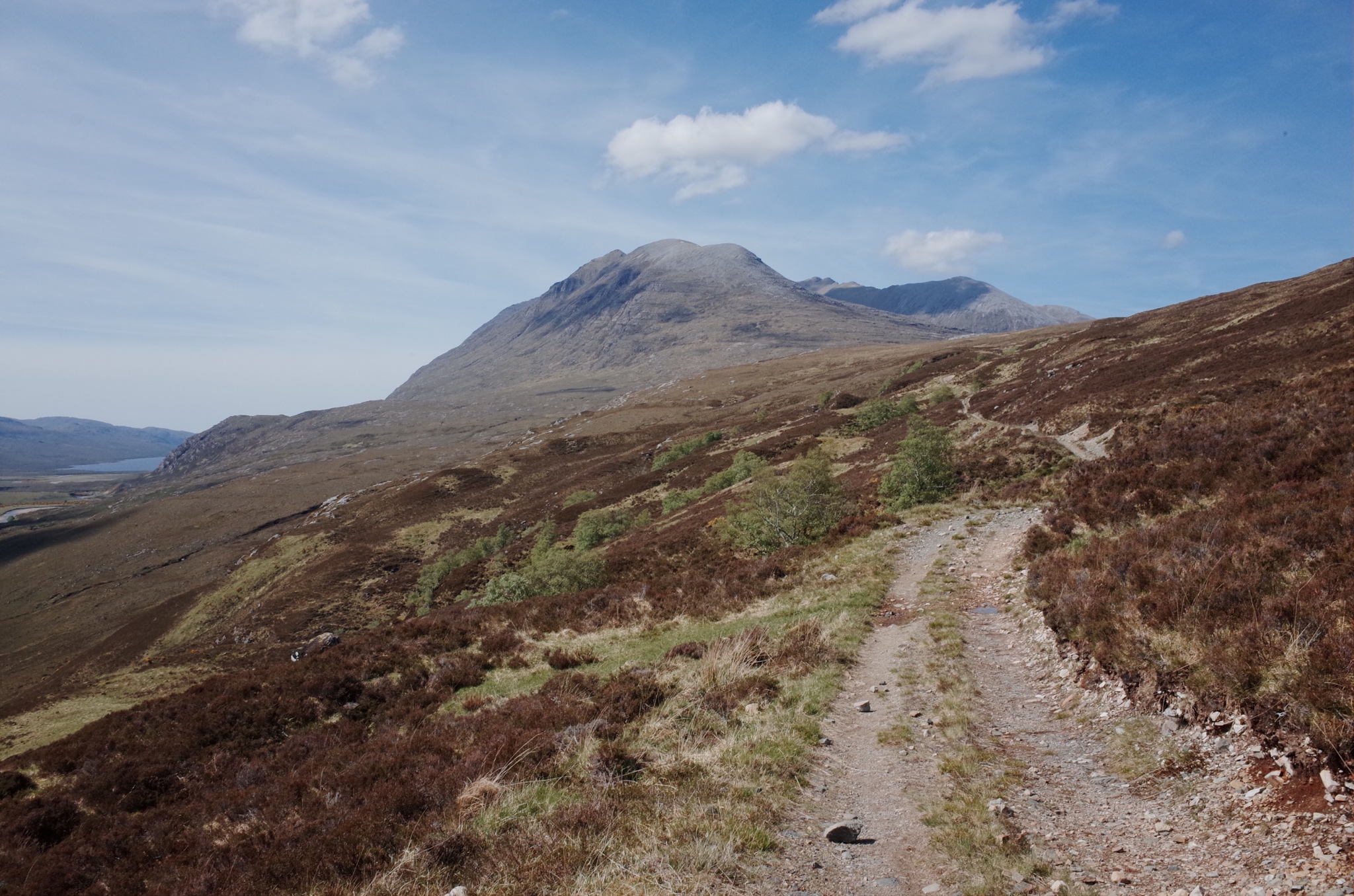 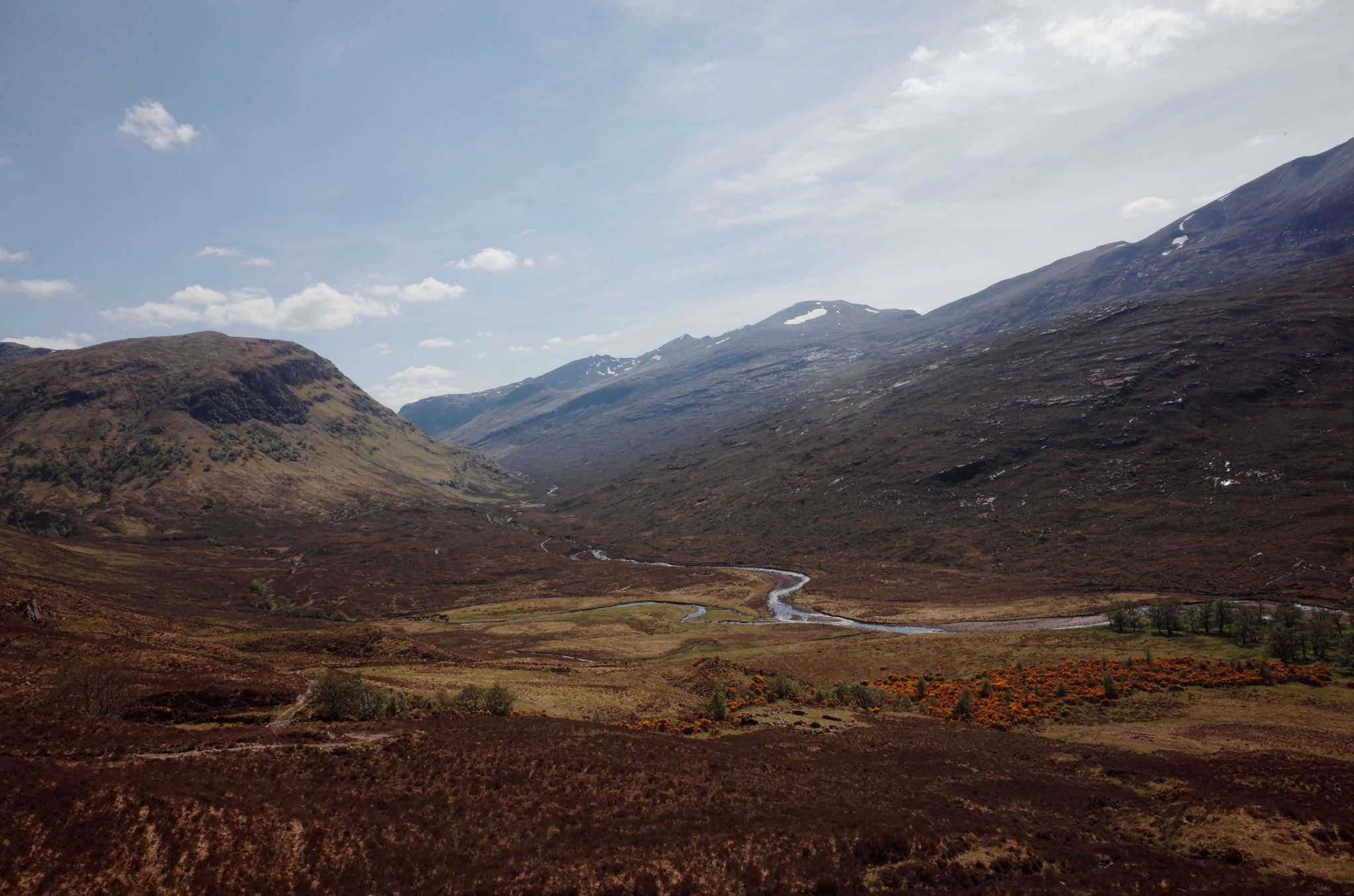 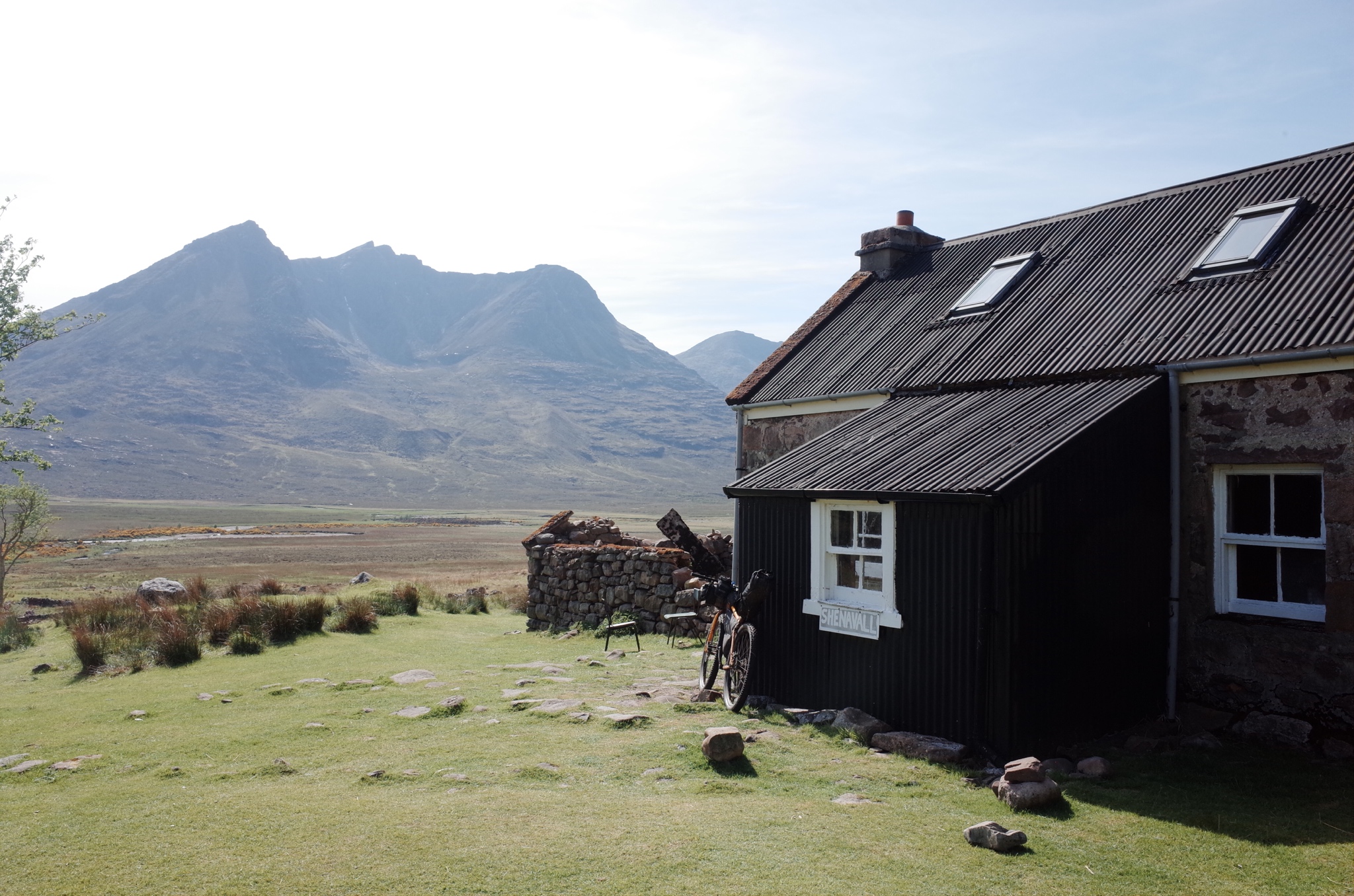 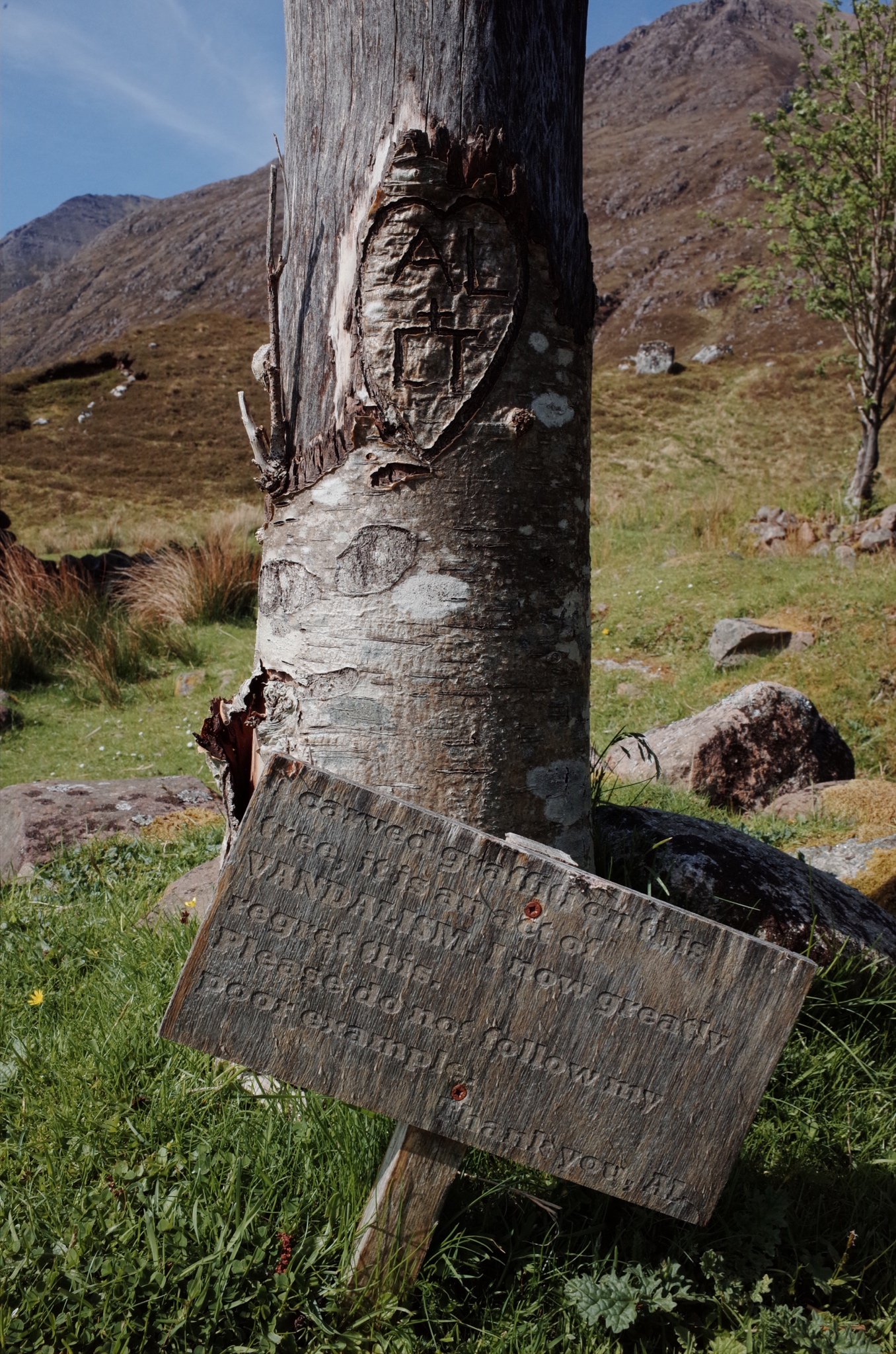 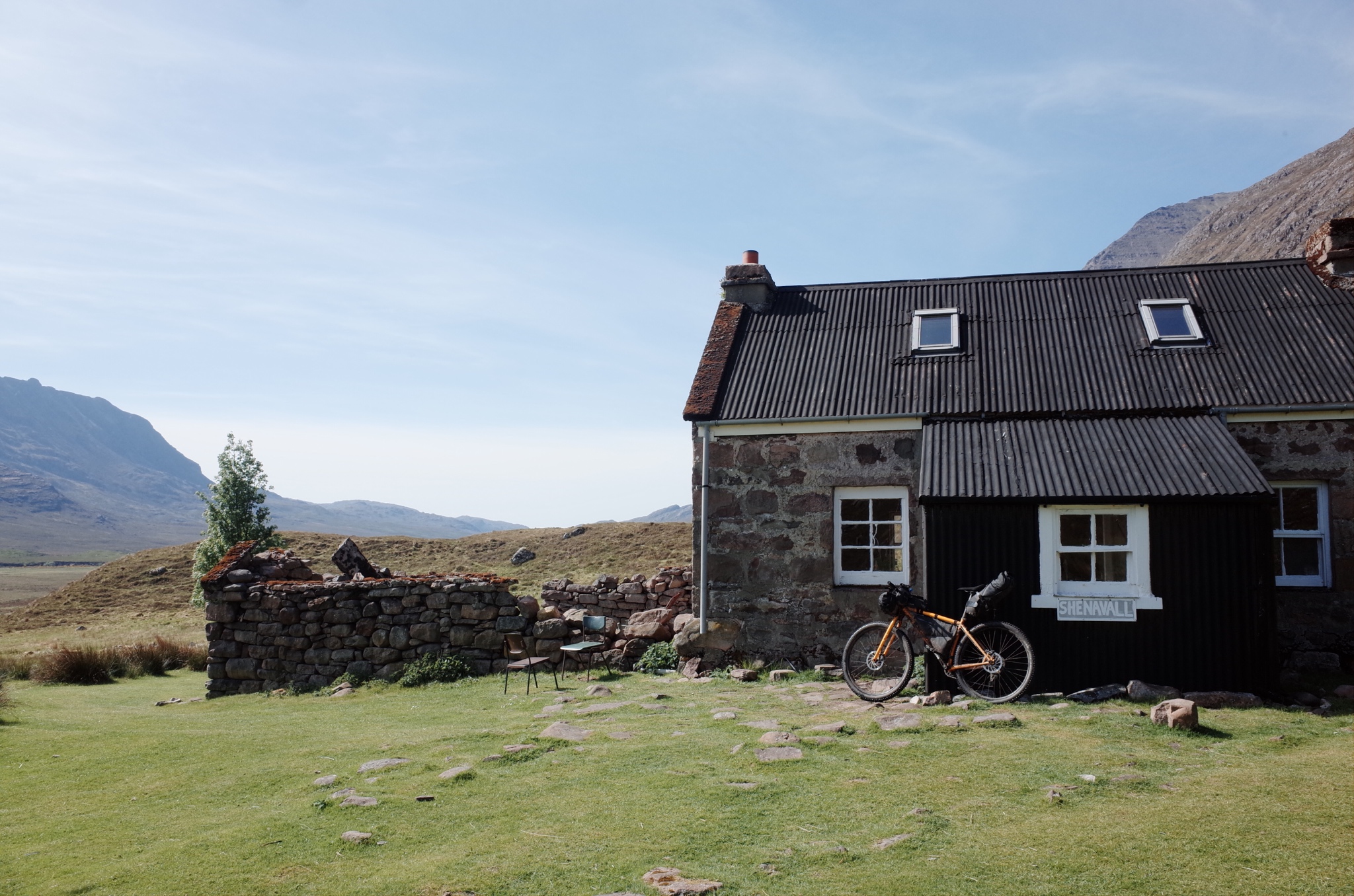 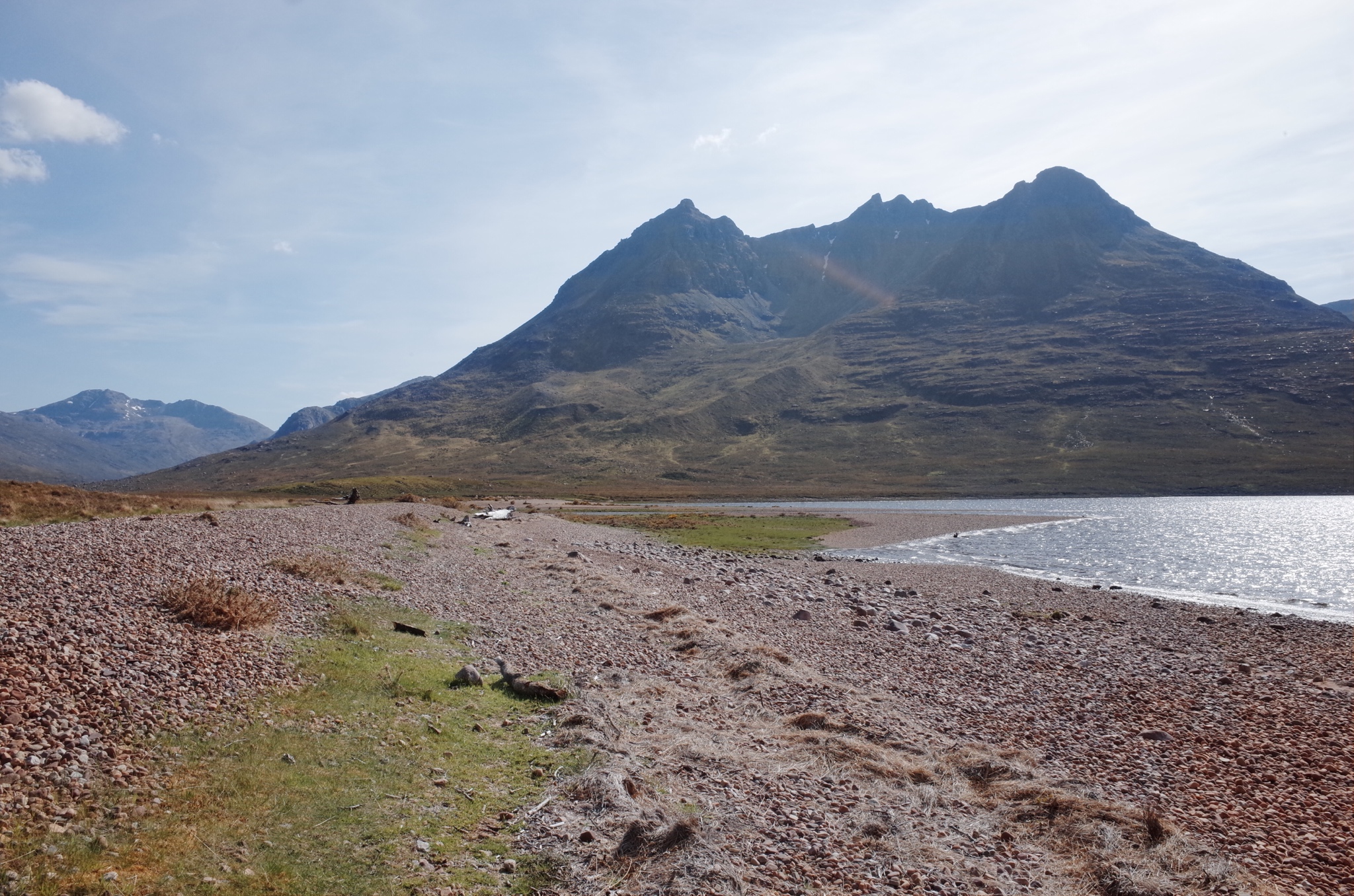 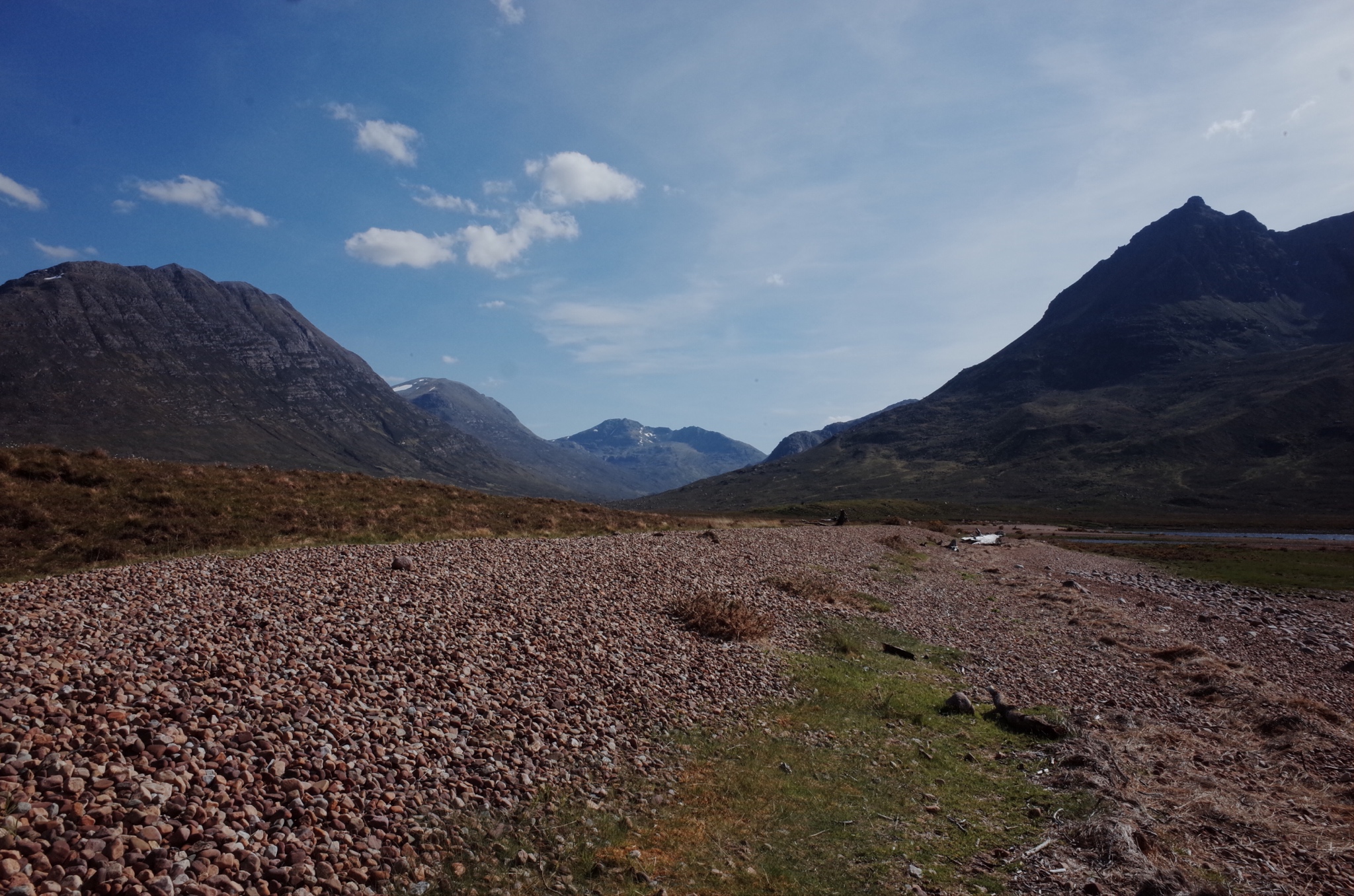 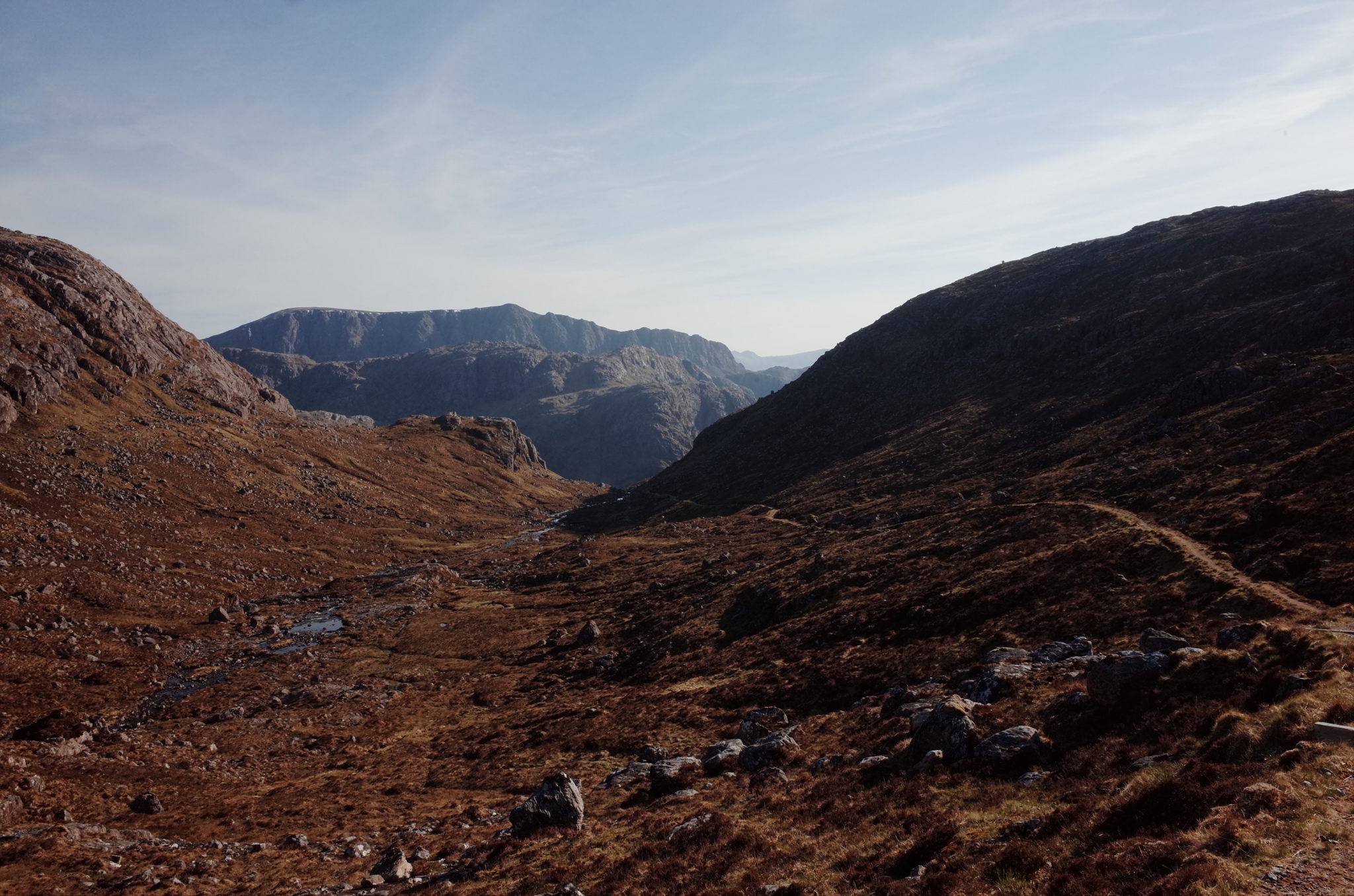 Dusty gravel rides feel like a long time ago.
Is this downcountry? 💁‍♂️
Autumn is definitely arrived and I’m already missing the dusty trails.
Mega couple of days with @ride_bmc shredding the new Fourstroke XC bikes in the sun.
Looking forward to a packed few days of MTBing in France this week.
Been a while since I raced a MTB but I had a great time at the Tweedlove Bosch eMTB Challenge, even managed to sneak onto the podium.
New Capital Trail FKT
Peak summer post work dusty rides.
Never not a big day in the Lammermuirs.