I woke in a moment of panic. It was probably no more than an hour since I had gone to sleep. My stomach was making very loud, very angry noises. I leapt up as best you can when tucked up in a bivy bag and rushed to the toilet. My belly was far from happy. I limped back when it was safe, re-inflated my bed and returned to sleep. This process repeated every hour until I just didn’t get back into my sleeping bag as the sun was coming up. My knee had become very chubby and sore during my night time adventures. My belly had settled again so I limped over to the picnic table to give breakfast a go. The morning sun was already blazing across the Loch Maree, the water very still and the mountains in the distance shimmered. With porridge simmering it was decision time again. Do I push through the pain of my knee towards Torridon and the prospect of more hike-a-bike or call it a day and hope that the pedal to Garve would be easy.

Ibuprofen was taken and after eating breakfast, packing and some stretching my knee was making it clear that the decision was already made. I set off towards Kinlochewe with a desperate optimism that maybe a little pedalling would sort me out. The 10 miles of riding on the road yielded poor results. I knew it was over.

The petrol station at Kinlochewe has everything a dejected bikepacker could need. A little shop, fresh coffee, a working toilet and even wifi. Garve was not too far away but the coffee shop lady told me that there was a station at Achnasheen just 8 miles away. I sat in the sun and watched people come and go as I ate second breakfast, relaxed that I had no urgent needed to pedal anywhere. 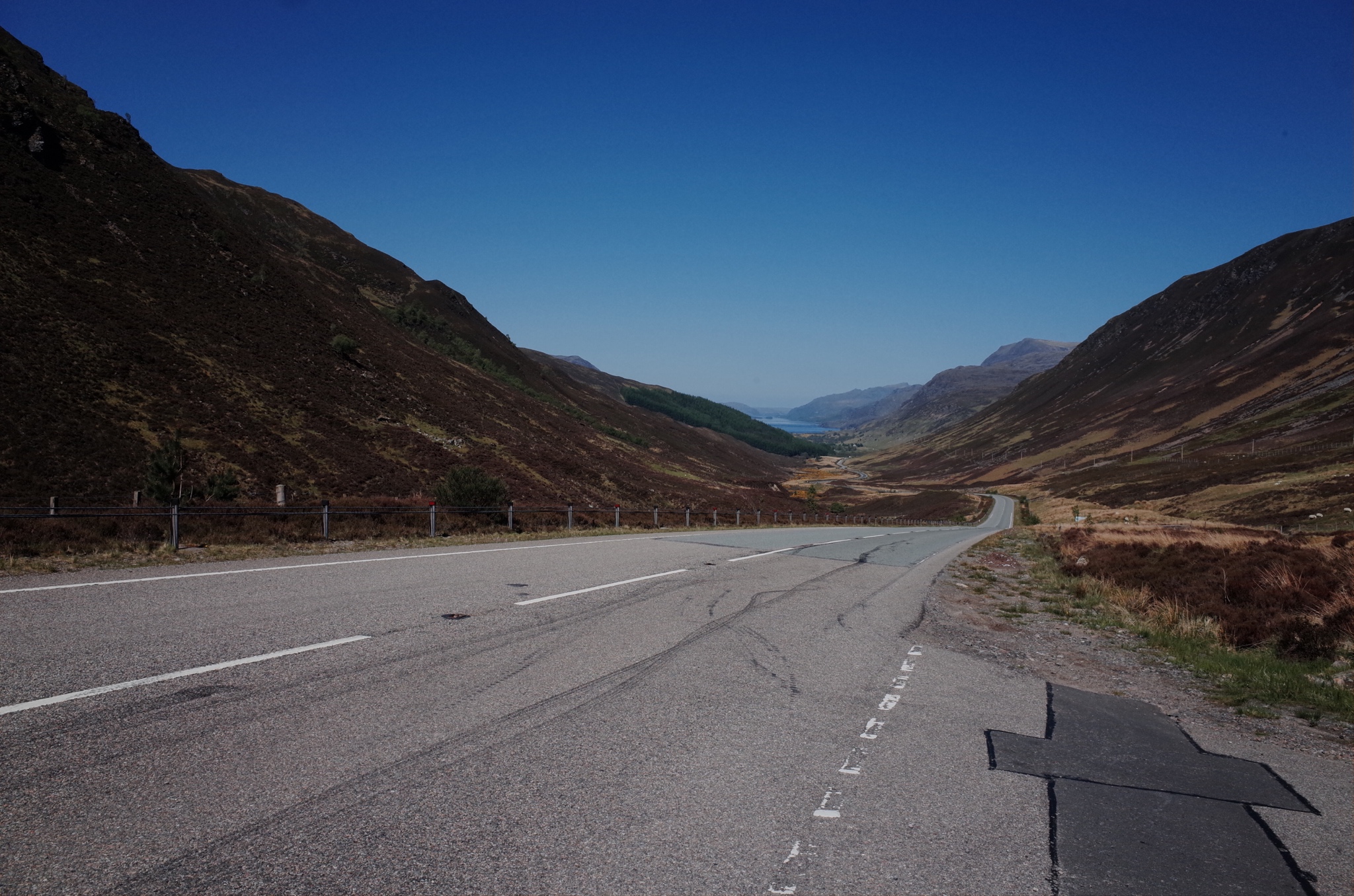 With second breakfast finished I set off for the train, cycling past the turning on my GPS and thus leaving the Highland Trail route behind. It was officially over. Although I came up short I had still completed my longest multi-day ride. I had endured 400 miles of gravel, single track, tarmac and hike-a-bike will being roasted in the sun or drenched in the rain. It felt odd, even though I was quitting as I was physically unable to continue, mentally I was feeling stronger than I had over the last few days. With my trip in its conclusion the “it feels like we are doing it” attitude was replaced with the feeling that I had simply given up when my body found it a little hard.

I kept looking back down the road thinking about the 150 miles left of the route. The pain of each pedal stroke was a clear message that turning back and soldering on would just be an exercise in hardship and a potential risk of long term damage.

The Highland Trail 550 was the most intense and immersive experience I have ever experienced on a bike. The immensity of the goal and the landscape that you must overcome is both overwhelming and humbling. I had struck lucky for the most part, long days and dry conditions had aided my journey and allowed a smooth as possible passage through the fickle and often brutal landscape. I could not imagine what it must be like if the conditions were less than ideal.

The thought of doing it all again in the future weighed heavy. All the hike-a-bike and the endless inescapable landscapes, a 400 mile reminder of previous struggles and failures. It was hard to comprehend being able to commit again now that the route was shadowed by my previous attempt.

When the train pulled into Waverley Station all the hardship had been forgotten. I was already thinking about next year… 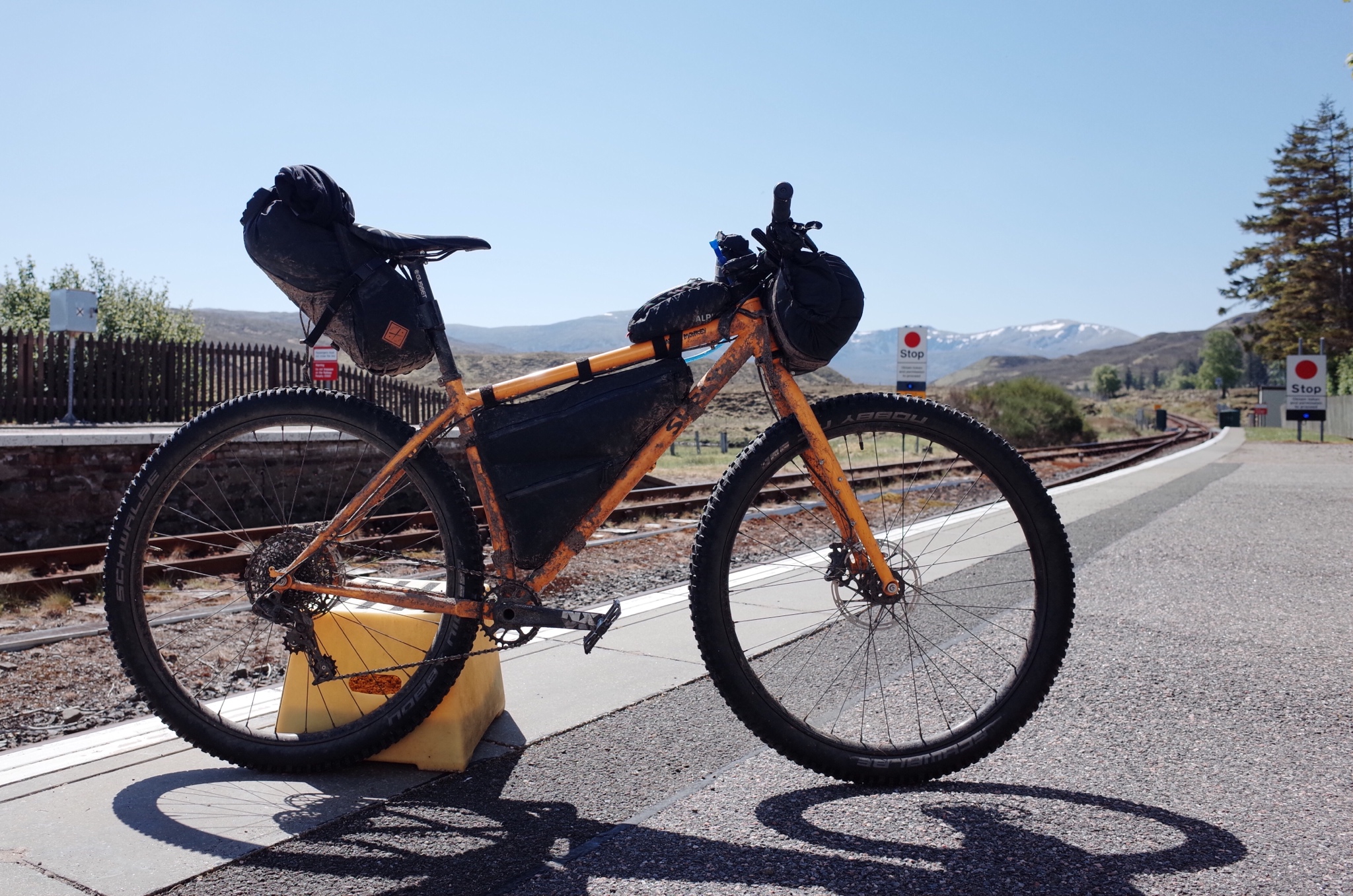 To close I have to say a big thank you to Duncan who sorted me out with the most bombproof monster of a bike. The Surly Karate Monkey worked flawlessly, nothing broke or went wrong, it just kept trucking along over rocks, ditches and bogs. Then on every descent it was a hooligan, crushing everything in its path and making sure that I had the biggest smile on my face.

I also have to say a big thank you to Straight Cut Design who kitted me out with a custom frame bag for the trip which stood up to all the rough, tumble and poorly packed cramming of things. If I had burst a zip or seam mid trail it would have been a disaster but every stitch was rock solid and dependable.